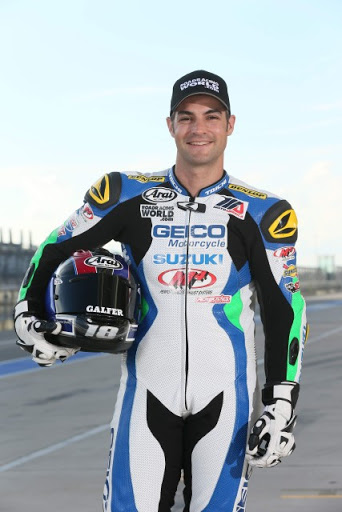 Chris Ulrich has been around motorcycle road racing as long as he can remember and competed in professional motorcycle racing for 18 years. He grew up riding in a box van with his parents John and Trudy Ulrich to racetracks all over the U.S. during the early years of Team Hammer, the racing program owned and operated by his family. Chris started mini-road racing on 50cc and 80cc motorcycles, then moved to purpose-built 125cc and 250cc Grand Prix racebikes as a teenager.

Chris did his first professional season in 1998 in the AMA Pro 250cc Grand Prix class, and finished third in the championship the following year with two podium finishes on his Kids: Don’t Smoke! Yamaha TZ250. Another podium and strong finishes in 2000 resulted in fifth overall in 250cc Grand Prix Championship with the World Sports Yamaha team. In his spare time, Chris rode with Vesrah Suzuki to the Willow Springs 24-Hour victory and the WERA National Endurance Championship on a GSX-R1000, becoming the first second-generation National Endurance Champion.

In 2001, Chris left the two-strokes completely behind and concentrated on the AMA Pro 750cc Superstock Championship with Team Roadracingworld.com Suzuki, winning at Laguna Seca and earning two other podium finishes.

Chris moved to the Valvoline Suzuki team for 2002, with a win at Mid-Ohio and four top-10 finishes, finishing eighth in the 750cc Superstock Championship. In his second year with the team, Chris’ luck turned bad with injuries. For 2004, he ran an abbreviated season with Team Roadracingworld.com Suzuki, in the AMA 600cc Supersport class, earning a Top-10 finish at Mid-Ohio.

Chris moved to the new AMA 1000cc Superstock class for 2005 on his Team Roadracingworld.com Suzuki GSX-R1000. For 2006, Chris founded what is now Chris Ulrich Racing LLC to take charge of his own program, fielding himself and Robertino Pietri under the Roadracingworld.com banner, with technical support from Team Hammer, Inc. It was the turnaround season that Chris needed and he finished ninth in the AMA Superstock championship and co-rode to another WERA National Endurance Championship with Vesrah Suzuki.

Chris continued to run his Chris Ulrich Racing program in 2007, again joined by teammate Robertino Pietri. Chris ended the 2007 season ranked sixth in the AMA Superstock championship standings, earning a pole position at Road America and finishing in the Top 10 in all but two races that season. He also co-rode to the WERA Endurance Championship again with Vesrah Suzuki. In 2008 Chris and Robertino again teamed up on Chris Ulrich Racing machines run under the Roadracingworld.com Suzuki banner, and Chris opened the 2008 season with a fourth-place finish at Daytona followed by a return to the AMA Superstock Podium with a third at Barber Motorsports Park. However, Chris shattered his left hand mid-way through the season at Road America, but still finished sixth in the 2008 AMA Superstock Championship. Chris was also part of Vesrah Suzuki’s 2008 WERA National Endurance Championship winning team for a fourth time.

Joined by Santiago Villa and Russ Wikle on the Chris Ulrich Racing squad in 2009, Chris finished 12th in AMA Superbike while developing the team’s Suzuki GSX-R1000K9.

After strong late-season and off-season performances, Chris signed to ride the #18 M4 Suzuki GSX-R1000 Superbike for the 2010 season while Villa continued to carry the flag for Chris Ulrich Racing. Chris finished eighth in the final AMA Pro Superbike point standings despite missing two races due to injury. For 2011, Chris returned on the #18 M4 Suzuki GSX-R1000 Superbike, hoping to continue improving his race and points finishes. But the season went all wrong when Chris was caught up in a massive crash during the second event weekend of the season, suffering a broken back, internal injuries and a concussion when his flying racebike came down and hit him. Chris spent time healing on the couch before trying to return to competition–in retrospect–too soon; he struggled to regain race fitness and failed to finish a single additional race.

With a new multi-year title sponsorship deal from GEICO Motorcycle and continued technical and logistical support from Team Hammer, Chris Ulrich Racing fielded Martin Cardenas on a GSX-R600 in the 2012 AMA Pro Daytona SportBike Championship, under the GEICO Suzuki banner. Chris himself again competed in AMA Pro Superbike, riding an M4 Suzuki GSX-R1000 and continuing to recover from his 2011 injuries, finally returning to form late in the season with a string of top-10 finishes. Cardenas won eight races and earned the AMA Pro Daytona SportBike title for the second time, while Ulrich posted a best finish of sixth en route to 10th in final AMA Pro Superbike points. 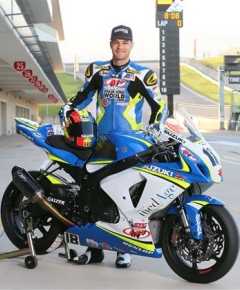 For 2014 Jake Zemke signed to ride Chris Ulrich Racing’s GEICO Honda CBR600RR. AMA Pro Racing announced a half-strength 2014 schedule of five event weekends (later increased to six) instead of the historic average of 10 event weekends, and followed that up with the revelation that there would be no TV coverage of the series. In response, Team Hammer promoted a three-round racing series in conjunction with WERA, AFM and UtahSBA regional events at California Speedway, Sonoma Raceway and Miller Motorsports Park, each round including a Pro Superbike race and a Pro Sportbike race. The three rounds fit into a gap in the AMA Pro schedule, and were all over in four weeks time, between the end of April and the end of May. Besides his riding commitments, Chris was in the middle of organizing what would become the GEICO Motorcycle Superbike Shootout Presented by Yamaha. The work included producing a one-hour TV show covering each of the six individual races. The series of six one-hour shows was shown on MAV TV, and each individual show aired six times–giving the new series a total of 36 hours of TV time.

When it came time to race, Chris finished sixth in Pro Superbike points with eighth, 10th and third-place finishes in the three Pro Superbike races. His podium finish came in the last race of the series; with the heavy series organizational work done, he was able to concentrate on being a racer on that final weekend. Zemke, meanwhile, finished sixth in Pro Sportbike points, with fourth-place finishes at California Speedway and Milller Motorsports Park and a DNF due to a crash at Sonoma Raceway.

In 2015 Chris raced the #18 GEICO Suzuki GSX-R1000 in MotoAmerica AMA/FIM Superbike, with technical and logistical support from Team Hammer.

After racing for 23 years, including 18 years in the professional ranks with AMA Pro and MotoAmerica, Ulrich retired from professional motorcycle racing in 2016. He won AMA Pro National races, finished in the top five in points, and stood on Pro race podiums 10 times, as well as co-riding to the Overall WERA National Endurance Championship four times.

When he’s not scouting and mentoring young talent at the racetrack or giving racetrack rides on a 2-seat Superbike during MotoAmerica events to help television, radio and print reporters understand the sport of motorcycle road racing, Chris Ulrich continues as Racing Editor for Roadracing World magazine. His duties include writing about new motorcycle models and racebikes he rides in intros and tests held at tracks around the world. He also writes a monthly column called The Adventures of a Racer.