In motorcycle racing, there is no substitute for experience. Team Hammer Overall Crew Chief Keith Perry has been a motorcycle mechanic since 1969, when he was just 14 years old.

Perry has been through the battles of motorcycle racing since the late 1970s, first as a racer before turning his attention to tuning. Since then, Perry has earned a sterling reputation as a man behind fast, reliable, and legal machines capable of winning races. 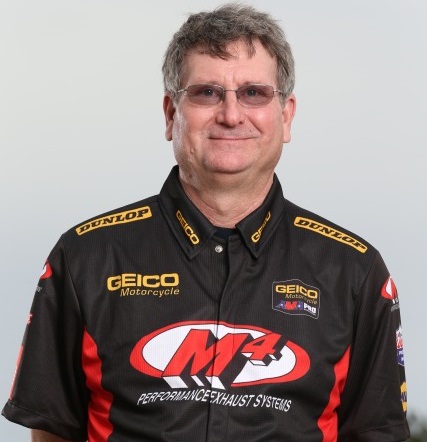 Perry is from Alabama and the team’s race shop is located in his hometown of Athens. Keith first joined Team Hammer in 1989 and since then has overseen plenty of successful racing seasons. A myriad of WERA National Endurance Championships and sprint race titles has followed, including the 2001 AMA Formula Xtreme Championship that saw John Hopkins win his crown in a thrilling final race of the season. Under Perry’s watch, the team has logged many podium finishes in AMA National races and is primed for more success this year.

Perry oversees all of the team’s day-to-day operations in the same thoughtful, consistent style he’s shown for decades on the racing scene. During that span, Perry has been the Crew Chief as the team has grown and the shop has been expanded several times. In the chaotic world of racing, individuals like Perry bring a valuable sense of confidence and class to their teams.