Team Hammer, Inc. has signed Benny Solis to ride an M4 Honda CBR600RR in the 2013 AMA Pro Daytona SportBike Series. Solis, 18, is a second-generation road racer who has been competing since he was 11 years old. 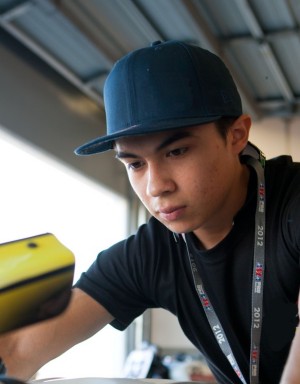 Solis started on 60cc and 80cc minibikes at SCMiniGP and CMRRA events in Southern California. He moved up to racing a Honda RS125 with USGPRU and won the 2007 USGPRU West Championship while also finishing third in the USGPRU East Championship. In 2008 Solis won the AMA U.S. Rookies Cup Championship with five race wins and seven podiums in nine races. He competed overseas in the 2009 MotoGP Rookies Cup and also raced a limited schedule with a RoadracingWorld.com-sponsored Moriwaki MD250H in the U.S., winning two USGPRU races and one WERA West race.

In 2012 Solis moved up to AMA Pro Daytona SportBike with three top-10 race finishes and a best qualifying result of sixth.

“I first saw Benny race when he was about 12 years old and started paying serious attention when I saw him winning Red Bull Rookies Cup races held during AMA Pro weekends in 2008,” said Team Hammer owner John Ulrich, who raced with Benny’s father Ben during the 1990s. “In 2009 I worked with Benny on a Moriwaki MD250H project, and in 2011 I put together a deal so he could race in AMA Pro SuperSport on a Honda CBR600RR. Benny is clearly talented and we’ve been looking for an opportunity to see what he can do on Team Hammer racebikes. Now things have come together and I am really looking forward to working with Benny and helping him realize his potential in AMA Pro SportBike.”