ALTON, Va. (May 15) — Chris Ulrich and his GEICO Suzuki Superbike team return to Virginia International Raceway this weekend for the third round of the MotoAmerica Mid-Atlantic AMA/FIM Road Racing Championship.

The motorcycle road-racing series hasn’t made a stop at VIR for five years, but the pristine facility has welcomed back the sport’s stars.

“We haven’t been here since 2010, so it’s nice to come back here,” Ulrich said. “VIR has done a great job in welcoming us with open arms. They’ve improved the track for us and have done some great promotions ahead of the event.” 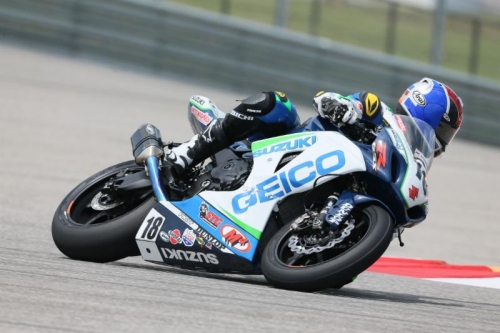 Ulrich has been a big part of the pre-race hype, bringing his two-seat GEICO Suzuki Superbike to the 2.25-mile track for rides with several members of the regional media, and on Thursday Ulrich was the lead racer on a media tour in the Richmond, Va., area.

“That’s a metropolitan area and it’s the capital of the state,” Ulrich said. “It’s a great audience, and hopefully we can draw some fans from up there to VIR.”

Ulrich is also hopeful of drawing some more speed out of his Suzuki, which has struggled with electronics gremlins in the first two races of 2015, at Circuit of the Americas in Austin, Texas, and at Road Atlanta.

“I’m looking forward to the weekend,” Ulrich said. “We kinda licked our wounds after COTA and Road Atlanta with all the difficulties we had with some of the electronics. We’ve improved that situation and we’re working on improving the bike again for this round and moving up to where I feel I belong.”

Ulrich has spent a lot of time on his bike, running 12 laps in the opening practice Friday.

“This morning’s warm-up session, that was probably the most laps I’ve done on the bike in a 60-minute session all season,” Ulrich said. “I’m really happy about that. Now we’ve got to improve a few things and get me a little more comfortable so we can start moving up.”

The Superbike class has one more practice Friday with another Saturday morning before qualifying Saturday afternoon. Two 25-lap races are scheduled for Sunday.