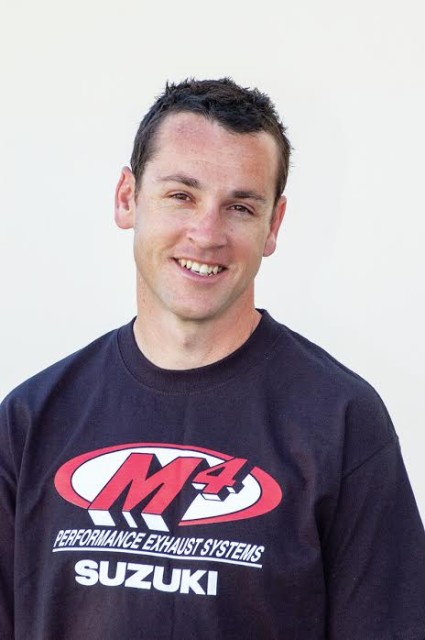 Australian David Anthony has signed a contract with Team Hammer, Inc. to race an M4 Suzuki GSX-R600 in the 2015 MotoAmerica Supersport Series.

“I wanted to focus on riding instead of running a team,” said Anthony, who has operated his own racing program since he came to the U.S. in 2006. “I sent a couple of e-mails out. The first one I sent was to Team Hammer, and they got back to me right away. They’re located nearby so I went and had a meeting with them, and that led to a deal.

“Team Hammer has won a lot of races and they’ve won Pro Championships, so they’re right up there with the top teams. That’s the main reason I contacted them. I wanted to ride for someone who had good equipment, a good crew and good results so I know it’s all on me.”

Although he has had success racing 600cc machines, Anthony is best known as a 1000cc Superbike rider, finishing fifth in the 2014 AMA Pro Superbike Championship with two podium finishes and third in the 2014 Superbike Shootout Series with one podium finish. But the chance to race an M4 Suzuki GSX-R600 in the MotoAmerica Supersport class was too good of an opportunity to pass up, he said.

“When I first contacted Team Hammer they told me they had a Supersport spot available,” said Anthony. “It didn’t take me long to realize that it’s a much better move for me to do that so I can focus on my riding rather than continue with my own program on the 1000. This way it allows me to train properly and not have to focus on running a business, which is what I’ve always done in the past. Even the last couple of weeks my training has paid off a lot and I’ve lost a bit of weight. That’s my goal, to get fit for riding the M4 Suzuki GSX-R600 and go out and win some races. And I don’t see why we can’t.”

“David Anthony really got our attention during the 2014 season,” said Team Hammer Crew Chief Keith Perry. “We were surprised when he contacted us, but he was serious, and we were able to make a deal. We had great success when Martin Cardenas switched from racing a GSX-R1000 Superbike in 2011 to racing a GSX-R600 Sportbike in 2012 and we hope to repeat that experience with David in 2015.”

About Team Hammer: This year will mark Team Hammer’s 35th consecutive season of operating as a professional road racing team. During that time, racebikes built and fielded by Team Hammer have won 59 AMA Pro National races, have finished on AMA Pro National podiums 136 times and have won five AMA Pro National Championships, (the most recent in 2012), as well as two FIM South American Championships (one each in Superbike and Supersport). The team has also won 133 endurance races overall (including seven 24-hour races) and won 13 Overall WERA National Endurance Championships with Suzuki motorcycles, and holds the U.S. record for mileage covered in a 24-hour race. The team also competed in the televised 1990s Formula USA National Championship, famously running “Methanol Monster” GSX-R1100 Superbikes fueled by methanol, and won 5 F-USA Championships.