BRASELTON, Ga. (April 19) — GEICO Suzuki rider Chris Ulrich rebounded from a difficult start to the weekend to post a pair of top-five finishes in the Superbike portion of the MotoAmerica Superbike Challenge on Sunday at Road Atlanta.

Ulrich, who changed manufacturers for the 2015 season, struggled in qualifying on Saturday as conditions at Road Atlanta varied because of rain. Plus, electronics gremlins stymied his pace, but the team continued to work on the setup, and he bounced back to run well in Sunday’s races.

“We worked on it, kept chipping away, kept working on it, working on it,” Ulrich said. “We put in two decent races, and I’ll take it and move on to Virginia International Raceway and we’ll make everything better.

“Changing OEMs isn’t easy. This whole process isn’t easy, and you’re fighting against a lot of really good guys. It’s definitely difficult in challenging conditions, but we made it through and improved our position from qualifying a lot.”

“The same gremlin that caused us to DNF at Austin came back,” Ulrich said. “We felt like we had the problem fixed, but I went down the back straight and it shut down. The bike was being a little finicky on us.”

The team made big changes on its second bike, which was set up for rain, but he just missed advancing to Superpole session No. 2.

“One more lap and we would’ve been good,” Ulrich said.

He was sixth-quickest in Superbike but had a tough start in the first Superbike race Sunday.

“The first start wasn’t that good,” Ulrich said. “I got together with another rider and it pushed me wide in Turn 1, but luckily we had a reboot there.”

The race was red-flagged and restarted, and Ulrich was better the second time around. 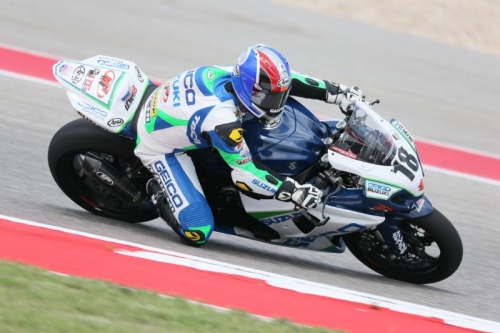 “The guys told me, ‘You’ve got to trust the launch control,’ ” Ulrich said. “So I did and got a good start. We made some changes during the red flag, because the first setting we had come up with for morning warm-up didn’t work.

“So we made some changes and went out there and went pretty quick. We worked our way into the top 10 overall, and we were fifth in Superbike.”

Ulrich had a better start in the second race but still needed to fight back.

“We recovered pretty well in that race,” Ulrich said. “The start was pretty good. I made a big mistake off the end of the back straight and lost a few positions. We recovered from that, moved forward, and just barely missed the Superbike podium.

“That’s forward progress and something we really, really needed. This weekend has been difficult for us with the settings and the rain and the problems we’ve had with electronics. So to have some light at the end of the tunnel has been good.”