AUSTIN, Texas (April 12) — After getting off to a fast start in the second MotoAmerica Superbike race, GEICO Suzuki rider Chris Ulrich’s day came to an early end at the Circuit of the Americas following a mechanical issue.

“I got a really good start today and was riding in the top 10,” Ulrich said. “I was looking to keep moving up from there. I had a good pace going and knew I could pick those guys off as the race went on and we got stronger.

“Around Lap 3 or 4 though, I went to downshift and it popped out of gear, causing me to lose a little ground. Then on the back straightaway it pushed wide and I didn’t really understand why, so I lost time there as well. The next time around the bike shut off just like it did in qualifying, which was a problem caused by a speed sensor. Right then I thought, ‘This isn’t good.’ I came in, we changed the speed sensor, and I went back out.

“A few laps later the bike was good and I got back into a rhythm with good lap times. We were a few laps down, but we just wanted to finish the race at that point. A couple of laps later though the bike died over in Turn 8. I made it to Turn 11 before it wouldn’t go anymore, and that was the end of my day.” 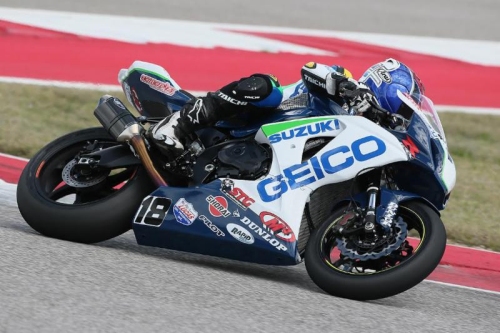 Despite not finishing the race like he had hoped, Ulrich was able to pull a few positives from Sunday’s showing that the team can use to prepare for the next round of competition.

“The good thing about today is that we showed a good pace,” Ulrich said. “Especially with all the challenges from yesterday, we can work off of that and go on from there. It was also good to be able to be up there racing in the thick of things today.

“We’ll take what we learned, go on home, make some changes, and then head on to Atlanta.”

Ulrich and the GEICO Suzuki team will look to rebound next week when the MotoAmerica series heads to Road America for the third and fourth rounds of racing action.