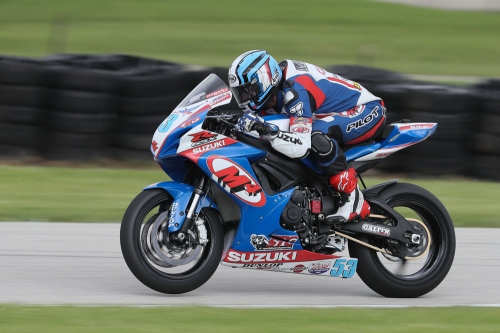 Meanwhile, teammate Cameron Petersen factored at the front of both Supersport races and added a podium finish of his own to round out an outstanding weekend for Team Hammer.
South African Petersen battled for the win in Saturday’s treacherous wet-to-dry contest. Petersen guided his M4SportbikeTrackGear.com Suzuki GSX-R600 around the four-mile circuit in aggressive fashion, swapping positions repeatedly in the three-way scrap for the victory.

Despite his determined ride, Petersen lost out in the run up the hill to the flag and came home a narrow third, just 0.264 out of the win.

Debise’s Supersport race on Saturday ended early due to a fried clutch, but came back swinging on Sunday. The Frenchman fought his way up from fourth early to push in either first or second for the majority of the race. On the final lap, Debise pushed his M4 SportbikeTrackGear.com Suzuki GSX-R600 into the lead and opened up just enough of a gap to survive a last-gasp drafting attempt by his rivals.

Debise claimed the checkered flag by a 0.095-second margin. It was the sixth podium result of his rookie season in MotoAmerica competition.

“Earlier in the year I finished third place and second place and I knew that all that remained was to finish in first,” said Debise. “I went for it and finally I got it today. I was worried I was going to get drafted like I did at VIR, so I pushed as hard as I could in the last two corners and opened up a bit of space. I am so happy, and I can’t thank the team enough for helping me achieve this.”

Petersen worked his way up into third on the penultimate lap but crossed the stripe 0.255 seconds back of another podium finish in fourth.

After the weekend, Petersen said, “I have to admit that I’m a little bit disappointed, but they were both great races. I went for it and pushed as hard as I possibly could on the brakes. I have to be happy with finishing on the podium on Saturday and coming so close to doing it again on Sunday. We’re making continual progress and are making ourselves a constant presence at the front.”

Superstock 1000 competitor Jake Lewis continued to work his way back up to speed after missing the opening stages of the season due to injury. The talented youngster replicated his VIR results with fifth and sixth-place results at Road America on the M4 Suzuki GSX-R1000.

M4 LOXY Suzuki’s Caroline Olsen returned from injury with a solid performance. After sitting out VIR with a concussion, Olsen took 15th in Saturday’s Superstock 600 race and then broke into the top 10 with a 10th-place result in Sunday’s race.

Illness upset Xavier Zayat’s weekend. The young rider was unable to start on Saturday and Sunday proved to be another difficult day.

Team Hammer now heads directly to Barber Motorsports Park in Birmingham, Alabama, for Round 6 of the 2016 AMA/FIM North American Road Racing on June 10-12.