The stellar showing rounded out a determined performance by the entire team despite the treacherous conditions that upped the difficult factor significantly during the race weekend.

Leading the charge was M4 SportbikeTrackGear.com Suzuki’s Cameron Petersen, who earned his first career MotoAmerica victory in Sunday’s Supersport contest. It was a bounce-back ride for the South African, having crashed out of a top-five position in Saturday’s Supersport race.

Sunday’s wet and cold race claimed numerous fallers as well — including Petersen, who crashed along with two of the other riders in the lead pack when they hit oil. The race was red-flagged and delayed for hours as the track was cleaned.

Despite the restart being pushed to the end of the day, Petersen maintained his courage and concentration, immediately racing into second then applying constant pressure on the leader as the laps wound down.

That pressure eventually paid dividends, as the leader crashed on the final lap, allowing Petersen to sweep by and claim his first-ever win on American soil. 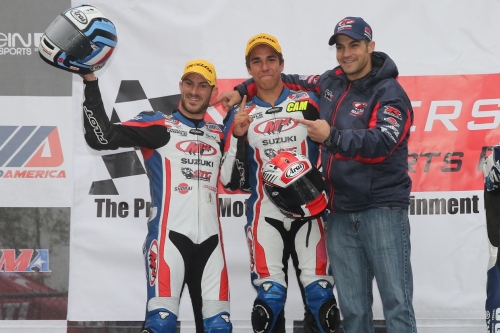 “It was a tough race,” Petersen said. “I knew that I would stand a chance in these conditions. Before the red flag, it was tricky; there was a lot of standing water out there. I just had to put that behind me when I lined up for the second part of the race. I got a pretty good start. I followed the leader for most of the race but on the last lap he pushed really hard. I was kind of gifted that win a little bit on the last lap, but I’ll take it. It’s my first win, and I’m over the moon. I couldn’t be happier. I can’t thank the whole M4 SportbikeTrackGear.com Suzuki team enough for giving me a machine I could win on. They stuck behind me. It’s been a tough weekend and to come up with a win is huge. I’m so happy.”

Valentin Debise added to the team’s elation by following Petersen home in second to hand M4 SportbikeTrackGear.com Suzuki the 1-2. The Frenchman capitalized on his teammate’s miscue on Saturday to finish in fifth, and then came through in the wet on Sunday with a steady and measured runner-up ride.Meanwhile, Larry Pegram performed like the cagey Superbike veteran he is with two outstanding rides his one-off weekend substitute duty on the M4 Suzuki GSX-R1000 Superbike.

Calling upon his vast experience in Sunday’s twin wet Superbike races, the Ohioan was the third finisher on Superbike-spec machinery both times. Pegram came home in fourth overall in race one and he backed that up with a sixth overall in race two.

The weekend’s difficult conditions weren’t so kind to Team Hammer’s Superstock 600 competitors. M4 SportbikeTrackGear.com Suzuki’s Xavier Zayat finished in eighth on Saturday, but crashed during the warm-up lap of Sunday’s wet race and did not finish the race. M4 LOXY Suzuki’s Caroline Olsen endured a difficult weekend as well, crashing out of both Superstock 600 races after pulling in a pair of top 10s at the venue last season.

Team Hammer will be back in action in two weeks — and joined by Jake Lewis, the team’s new Superstock 1000 competitor — as Round 4 of the AMA/FIM North American Road Racing Championship will take place on May 13-15 at Virginia International Raceway.