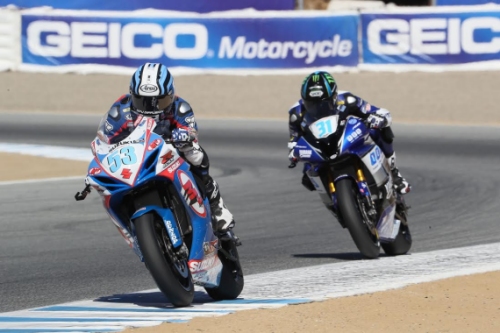 The Frenchman proved instantly at home and relentless around the highly technical track. He showcased his adeptness both on the brakes and firing out of the corners to seize second and defend the position to the checkered flag following a spirited battle.

In doing so, Debise furthered his perfect record of attaining at least one podium per race weekend since debuting in MotoAmerica. Besides standing as Debise’s ninth podium of the year, it was also his sixth finish of second or better.

“This track is more about exit corner and that’s where I’m good on my bike,” he explained. “I used everything I could on my bike to be the best. I was hoping to go and stay in the fight for the win, but I ended up having a great battle for second. I had a lot of fun. I want to say thanks to my M4 SportbikeTrackGear.com Suzuki team.”

South African Cameron Petersen came home just one position off the podium, winning out following a heated fight for fourth.

Debise and Petersen continue to rank third and fourth, respectively, in the 2016 MotoAmerica Supersport title chase with a combined two wins, 12 podiums, and 22 top fives.

M4 LOXY Suzuki’s Caroline Olsen enjoyed her best qualifying showing of the season, throwing down the fifth best lap among all Superstock 600 qualifiers and 11th overall including the Supersport contenders. Unfortunately, she was unable to take advantage of her speed, crashing out of the weekend’s solitary race.

However, M4 SportbikeTrackGear.com Suzuki’s substitute rider, Cameron Gish, quickly adapted to the team’s GSX-R600 and earned himself a top-ten result, taking tenth in the Superstock 600 contest.

Team Hammer will return to action following an extended layoff when the 2016 AMA/FIM North American Road Racing Championship reconvenes for its season finale at New Jersey Motorsports Park on September 9-11.