BOBBY FONG AND TEAM HAMMER ON THE PODIUM AT SONOMA RACEWAY 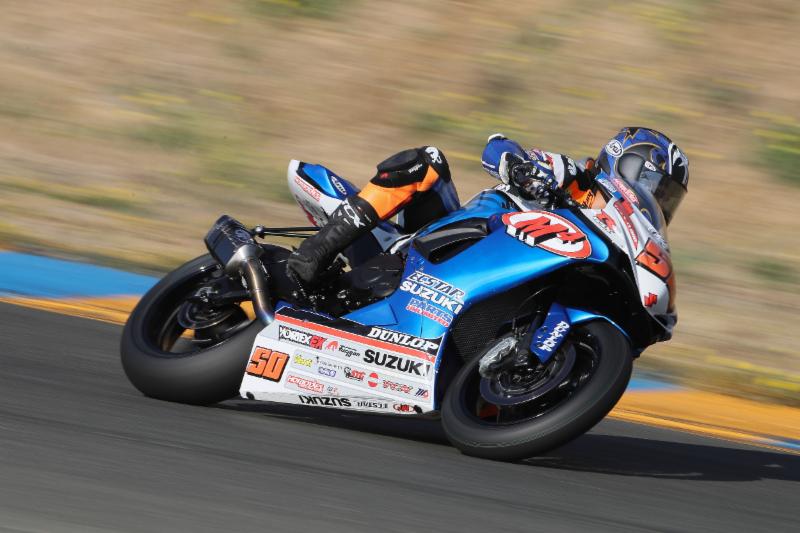 MotoAmerica Supersport championship points leader Fong sprinted out to the lead from pole aboard his GSX-R600. But the race was almost immediately red-flagged after his M4 ECSTAR Suzuki teammate, Sean Dylan Kelly, was pushed off track by another rider, and crashed heavily. He was transported to a local hospital, where he was examined, treated, and released.

Fong ripped off another holeshot and led the opening four laps of the restarted race. Running a close second, he pressured the leader for the duration. The Stockton, California, native gave everything he had to deliver his home fans a final-corner victory, but came up just 0.102-second short in the final lunge to the flag.

“I was just doing my best to hang on,” said Fong, who has finished either first or second in the last six MotoAmerica Supersport races. “It was a cat-and-mouse thing; I would catch him in one part of the track pretty good, and then he would gap me pretty good in the next. I was always playing catch-up, so I could never get quite close enough to make a move.

“But we definitely had a wonderful motorcycle out there, so I have to give it up to my M4 ECSTAR Suzuki crew. We’re going to give it hell tomorrow and try to take advantage of having another shot at the win.”

M4 ECSTAR Suzuki Superbike ace Jake Lewis got an outstanding start in Saturday’s Superbike Race and was running fourth, only to be rammed by another rider who crashed in an impossible attempt to dive up the inside in the race’s fourth corner.

Although the impact set off the airbag in his Furygan racing suit, Lewis somehow managed to keep his GSX-R1000 upright, but was forced far off course, losing time and positions. After finding his way back on circuit and eventually fighting from ninth back up to a top-five position, Lewis was black-flagged and disqualified for cutting the course.

Lewis said, “It was a tough race. I actually got a really good start and was in fourth up the hill. I felt good. Everyone was bunched up, and I got run into and knocked off the track. It was kind of a bonehead move. Everyone is in a group like that and we had a long race ahead of us. I thought I could do a good race because I usually do really well at this track.

“I re-entered where I felt was the safest and where my race wouldn’t be completely messed up because of another rider’s actions, so I’m definitely pretty bummed to get the black flag. I feel that penalty was pretty harsh for what I did.”

Meanwhile, Roadracing World Young Guns pilot Alex Dumas and Autovest Suzuki’s Joseph Blasius continued to rank near the top of the charts in Twins Cup competition on their identical SV650 racebikes. The on-form Dumas qualified second provisionally ahead of Sunday’s race, with Blasius just two positions further back in fourth.

Team Hammer will be looking to add to its podium tally before leaving Sonoma Raceway with the squad’s Supersport, Superbike, and Twins Cup pilots chasing after checkered flags on Sunday afternoon.