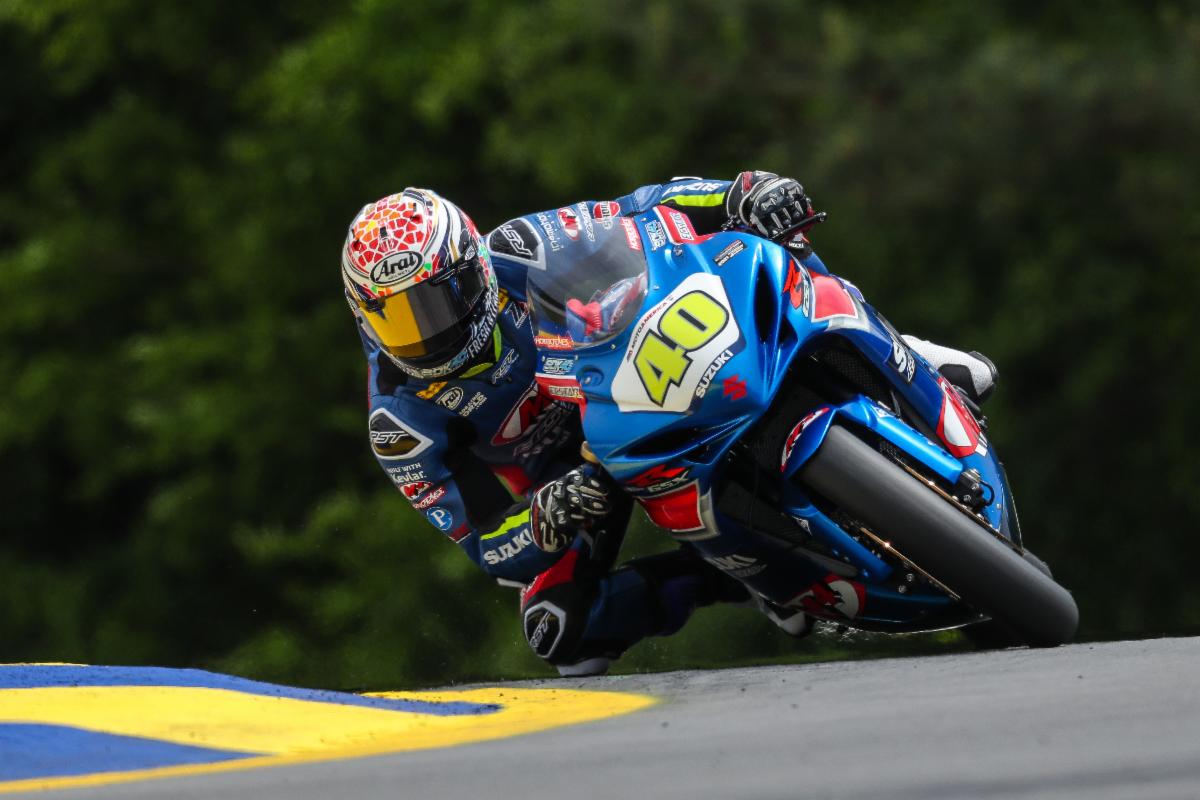 Sean Dylan Kelly (40) does the double with a pair of dominant wins on his GSX-R600. Photo by Brian J Nelson.

The weekend’s leading man was undoubtedly M4 ECSTAR Suzuki’s Sean Dylan Kelly, who made good on his promise to come back even stronger in ‘21 following a five-win, championship runner-up MotoAmerica Supersport campaign a year ago.

‘SDK’ delivered back-to-back blowout victories from pole in MotoAmerica Supersport competition at Road Atlanta. He twice demonstrated his elite dog-fighting capabilities aboard his Suzuki GSX-R600 early before ultimately breaking his pursuers’ challenge and escaping to take the checkered flag alone at the front.

As a result, Kelly now boasts four consecutive class victories dating back to the end of last season. The rising star said, “That was amazing. It’s awesome to see fans here again cheering us on. This is what we work for as a team. For myself, this offseason, it was really tough after a difficult 2020 season. But this is what we work for.” 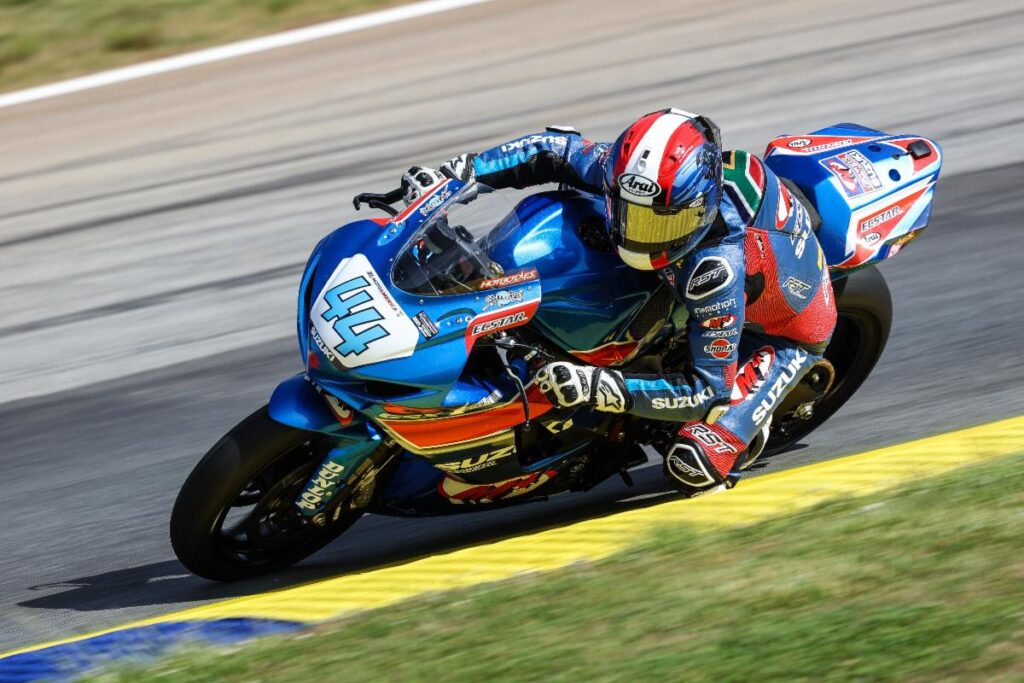 Sam Lochoff (44) kicked off his 2021 season with two impressive top ten finishes in Atlanta.
Photo by Brian J Nelson.
Kelly’s new teammate, Sam Lochoff, impressed in his MotoAmerica Supersport class (and team) debut. The South African twice fought his way forward from the outside of Row 3, claiming a fifth-place result on Saturday and a seventh on Sunday despite still acclimating to the power of Suzuki’s Supersport contender.

M4 ECSTAR Suzuki’s Superbike duo of Bobby Fong and Cameron Petersen flashed serious potential and came away with a runner-up result and four top-fives despite battling against misfortune and difficult circumstances. 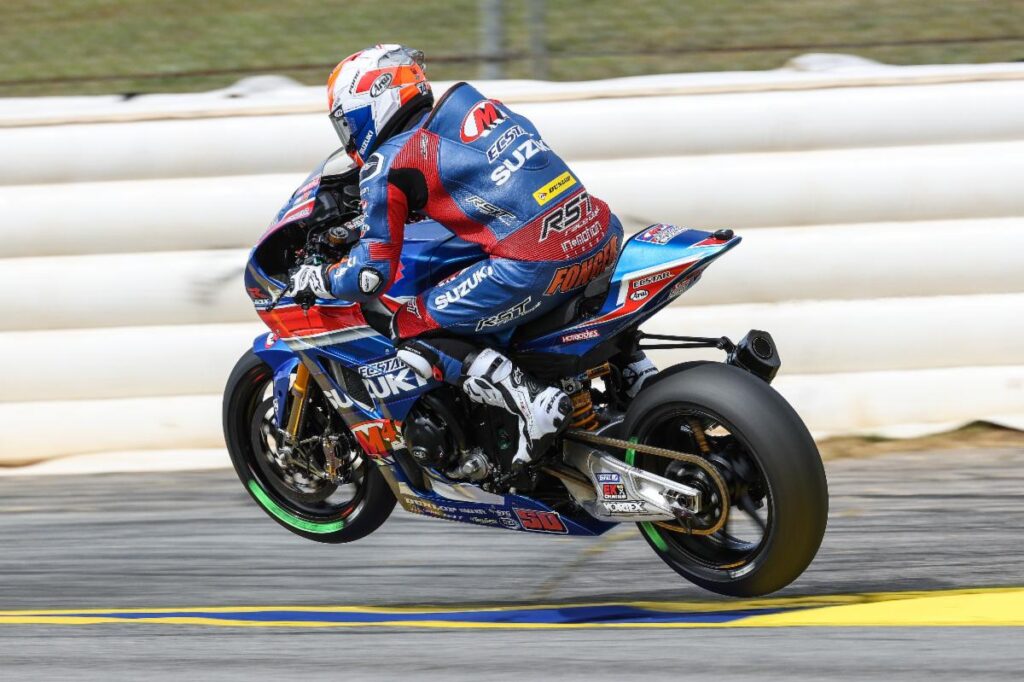 Bobby Fong (50) raced hard and delivered a podium finish and a top five finish to back it up.
Photo by Brian J. Nelson.
Fong stormed to second aboard his factory GSX-R1000 Superbike on Saturday and showed the pace to improve upon that position in Sunday’s rematch.

Unfortunately, the Californian was judged to have jumped the start and was assessed a ride-thru penalty while running at the front of the pack. The penalty eliminated Fong from contention for the win, but Fong rode hard after serving the penalty and salvaged a fifth-place finish in the end.

“It wasn’t a bad weekend. We came out in one piece with no crashes and got some points,” said Fong. “I jumped the start in race two and I apologize to the team for that. The track is downhill there on the start and I got a bit of a roll. It’s unfortunate, but that is part of racing. When I was leading, I didn’t feel like I was pushing too hard and I felt comfortable racing with those guys. The team worked really well this weekend and I feel really good about our season.”

South African Cam Petersen scored a pair of fourths, despite riding at less than 100% due to a healing injured foot. 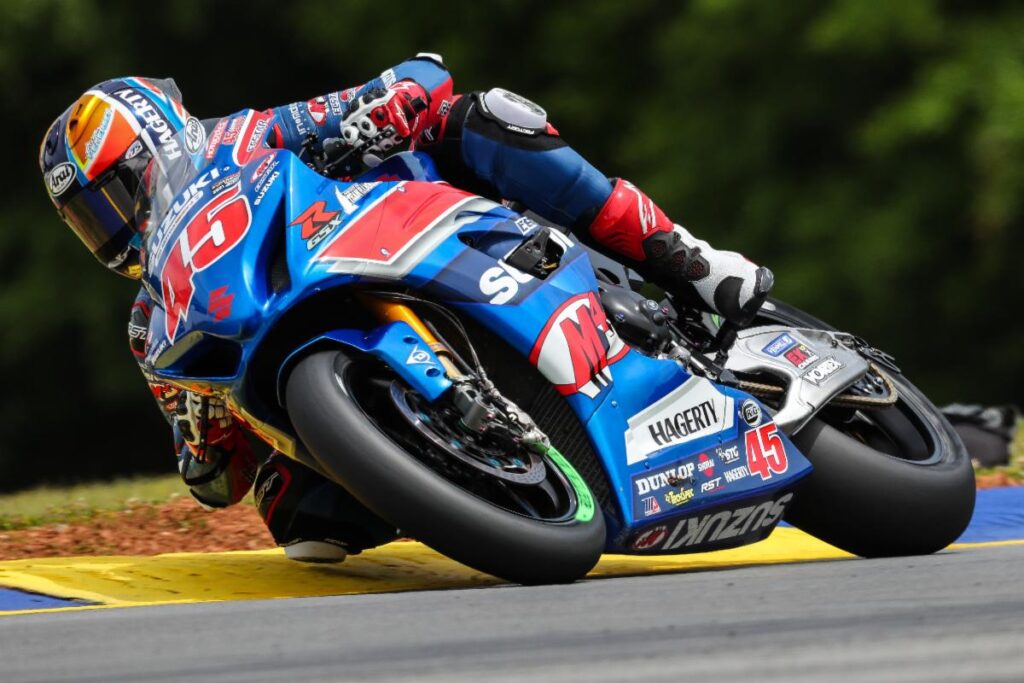 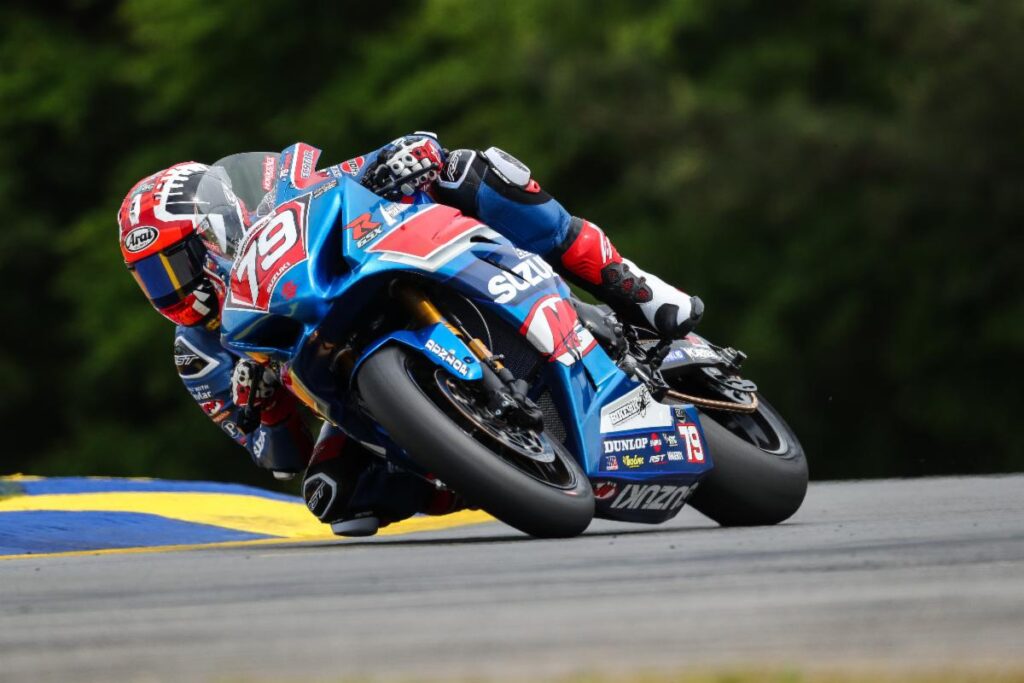 Wyatt Farris (79) had two solid races in his debut on the M4 ECSTAR Suzuki GSX-R1000.
Photo by Brian J Nelson.
Team Hammer and M4 ECSTAR Suzuki will look to make good on a promising opener when the 2021 season resumes at Virginia International Raceway in Alton, Virginia, on May 21-23.