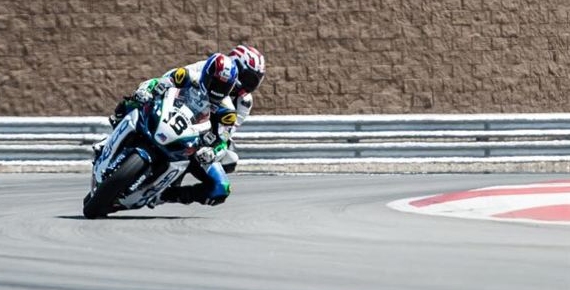 With more than a dozen individuals waiting for their chance to ride with Ulrich, Julia LaPalme, the Photo Editor for Motor Trend, summed up the thoughts of many after her high-speed ride.

“It was amazing, a lot of fun, definitely high adrenaline,” LaPalme said. “It was super fast. The main thing I was worried about was losing grip at some point, because I felt like I was holding on for dear life when we were accelerating and then pushing against the [grab handle] when we were braking. Other than that, I had full confidence with his ability going through those corners. He was so smooth. It was fun to see which line he was taking. I just had full trust and tons of fun.”

While many media members are accustomed to the usual four-wheel style of car racing, very few get to experience what racing on two wheels is really like. Those who had the ability to ride with Ulrich this past week, including LaPalme, really got a better understanding for what motorcycle racers go through.

“I love the quote, ‘Four wheels move the body. Two wheels move the soul,’ ” LaPalme said. “Personally, I prefer bikes over cars, but [cars] are my day job. I love being more in touch with the tarmac, more in touch with the environment. I just feel like being on two wheels is a more intimate experience, actually, with your speed, with your environment, and I get more of an adrenaline rush leaning into a corner than being pushed away by G force in a car. So, yeah, I prefer bikes.”

The 2015 MotoAmerica season will kick off April 10-12 at the Circuit of the Americas in Austin, Texas.