INDIANAPOLIS (Aug. 5) — Chris Ulrich and the GEICO Suzuki team will be making their first trek to famed Indianapolis Motor Speedway as the MotoAmerica AMA/FIM North American Superbike Championship is contested this weekend as part of the Red Bull Indianapolis Grand Prix.

The MotoGP World Championship bikes will be part of the show, giving Ulrich and his team a chance to perform in front of the world’s best.

“It’s a great opportunity to be a part of the MotoAmerica race at Indianapolis,” Ulrich said. “It’s the first year we’re going and the first year of the new series. It’s great exposure for the teams and riders, and I’m looking forward it.”

Because this is the first time many of the MotoAmerica racers have competed on the 2.591-mile, 16-turn road course, no one team or rider has a big advantage based on experience.

“There have been some guys who have been here,” Ulrich said. “I did a two-seat promotion here for the track in 2014. Being a new track and no one testing here, it does level the playing field a little bit, but we’ll find out who’s quickest to adapt Thursday at 1 p.m. and in the races this weekend.

Ulrich is coming off a pair of top-five finishes in Superbike at Mazda Raceway Laguna Seca in what was his best performance of the season after switching to Suzuki for 2015.

“We want to build on our results from Laguna Seca,” Ulrich said. “We had two top-fives in Superbike, so that’s the goal in Indy, too. We also want to improve our overall ranking. Laguna Seca was a good start to the last third of the season, and now we need to keep that momentum going for Indianapolis and New Jersey. 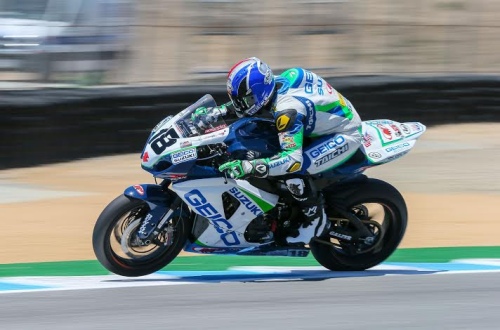