TOOELE, Utah (June 28) — Chris Ulrich continues to make progress with his GEICO Suzuki, posting an eighth-place finish in the first Superbike race Sunday at Miller Motorsports Park before an unfortunate incident sidelined him in the second race of the MotoAmerica Superbike Challenge.

Ulrich and Team Hammer switched manufacturers for the 2015 season, and the team continues to make progress.

“Looking at the positives, we got through another tough weekend and we are moving forward in the races, which is good,” Ulrich said. “We just have to clean up those little things on Friday that held us back this weekend, so if we can get that taken care of for Laguna Seca and come out of there with two good finishes that would be great.”

Ulrich struggled with the bike in qualifying and started 15th for Sunday’s two 18-lap races, but he and the team made adjustments and got the Suzuki faster. 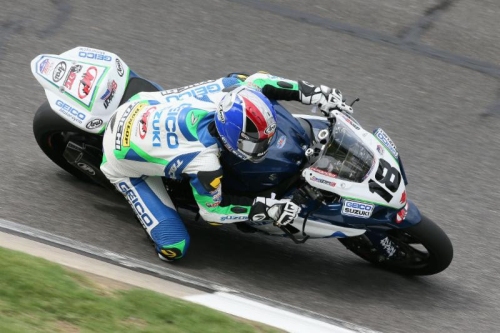 “We raced ourselves up to eighth in the Superbike class and got 11th overall, almost 10th overall, which would have been good,” Ulrich said.

More adjustments were made for the second race, in which Ulrich battled Danny Eslick for several laps.

“We made a couple of changes to help some of the stuff I was struggling with in the first race, and I think my pace was good,” Ulrich said. “I got myself to the lead of that four-bike battle. When you are battling with a guy like Danny Eslick you better bring you’re A-game and I thought I had it.

“I got by him and I was trying to make a gap. I went into Turn 5 and I broke at the same place I have been braking all weekend and had good success and no problems ever. I had one little slide and I caught it, but the second slide did me in. It was right as I was rolling off the brake going in there and turning the bike.”

Ulrich went down but got back up and tried to continue but had to go behind the wall.

“Eslick and I had a great battle going there for a while,” Ulrich said. “He got in underneath me and I got around him, but when I pulled around he got up underneath me and I think he hit my elbow with his front tire. It was good. It was a nice battle, but unfortunately I didn’t finish the battle.”

Ulrich and Team Hammer return to action with the MotoAmerica Series at Mazda Raceway Laguna Seca on July 17-19.

“I really like Laguna Seca. It’s a cool track and very historic,” Ulrich said. “GEICO is the title sponsor for the weekend, so all my friends from GEICO will be out there. I want to do well in front of my title sponsor. It will be a good weekend.”