The MotoAmerica Superbike and Superstock 1000 motorcycles will share the 11-turn, 2.238-mile road course with the world’s best road racers, and Ulrich hopes to again place his name on the Laguna Seca winner’s list.

“I have great history at Laguna Seca,” Ulrich said. “This is the location where I won my first AMA national road race. I always look forward to going back there, and I have had some great success there.

“Last year I raced there for the Superbike World Championship race, which was a great experience for me, but now I look forward to going back there with MotoAmerica and improving on the finish from Miller (Motorsports Park) and kicking off the final third of the year.”

Ulrich is ninth in the Superbike points standings after six of nine MotoAmerica races in 2015. He was eighth in the first of two races at the most recent event, in Salt Lake City.

Ulrich had an unfortunate crash in the second race in Salt Lake that set the team back a bit for that weekend, but with some work to the bikes and to Ulrich over the past two weeks, he and his team are ready to make a comeback.

“I feel good going into Laguna Seca,” Ulrich said. “Having over 14 days at home helped me quite a bit. I got a great 10 days of training in, so I feel really good going into the weekend, better than how I felt going into Miller. I’m looking forward to getting back out there and having another shot at it.”

Ulrich hopes to get off to a good start in Friday’s practices, which could lead to an automatic berth with the fastest bikes for Superpole 2 qualifying Saturday.

“If we can get that taken care of for Laguna Seca and come out of there with two good finishes that would be great,” Ulrich said. “I really like Laguna Seca. It’s a cool track, very historic.” 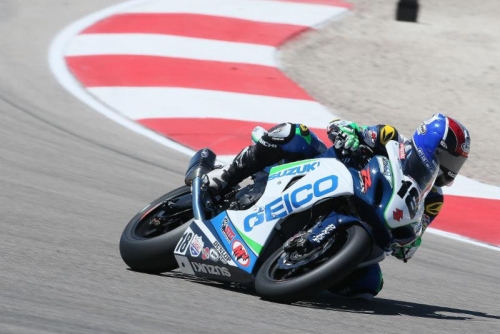