ALTON, Va. (May 16) — Chris Ulrich continues to make progress with his new GEICO Suzuki bike, and he looks for a good day in the third round of the MotoAmerica Mid-Atlantic AMA/FIM Road Racing Championship on Sunday at Virginia International Raceway.

Ulrich qualified 13th Saturday in the Superbike/Supersport 1000 category, missing out on a shot to improve that position in Superpole 1 qualifying by .027-second. The top two from Superpole 1 join the fastest 10 from practice in Superpole 2 to set the field.

After a crash earlier Saturday morning, Ulrich ended up with a best lap of one minute, 27.908 seconds in Superpole 1 to snare the No. 13 starting spot.

“We made progress yesterday, we made progress today,” Ulrich said. “We’re learning a few things as the sessions progress. We had a little setback this morning, of course, but that’s what Advil is made for. We’re moving forward, making progress with the bike, and we’re looking forward to two 25-lap races to gather more data and try to improve on the results.”

Ulrich’s progress is proven by his lap times, as he was more than two-tenths quicker than his opening laps Friday. The team switched to Suzuki for 2015, and while they are making progress, developing a new bike is difficult.

“We’re not far off, one- or two-tenths here,” Ulrich said. “Sometimes in racing it’s really hard to find those tenths, so we’re going to keep grinding away. It’s not like we’re miles and miles away from a top-seven, top-eight finish overall. We’ve just got to put a couple pieces of the puzzle together and not have any more setbacks.”

Ulrich and his team chased electrical gremlins at the first two races of the season, but they’ve been focused on tuning the bike at VIR.

“We’re just trying to get to the point where we can leave the bike alone and ride,” Ulrich said. “We’re almost there. Once you can do that — it’s never going to be perfect — the bike is developed to a good baseline, and then you can start working on your riding week in and week out, like all the guys who are ahead of me. 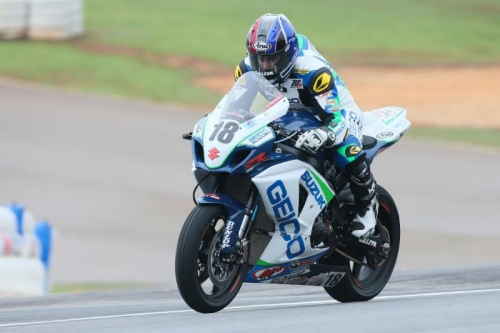 Ulrich suffered a crash in practice Saturday, going off the track in Turn 3 at nearly 100 mph. While his driving suit and bike had damage, Ulrich is ready to tackle 50 laps around VIR’s 2.25-mile road course in what is expected to be nearly 90-degree temperature.

“I look forward to tomorrow’s two races,” Ulrich said. “It’s 50 laps of racing, and it’s going to be a hot day. I feel like my fitness is pretty good, so we’re going to be able to compete the whole way.

“I train hard and sacrifice a lot to be able to be in good shape. Beating myself up today with that crash didn’t really help, but we’ll be OK.”