Ulrich charged from 13th to finish seventh in the first 25-lap race Sunday, and then he came home 10th in the second race. In Superbike, he was sixth in both races and moved up to sixth in the standings with a 20-point day at VIR.

“We’re moving up in the championship and getting the bike a lot better,” Ulrich said. “We’ve solved some of the electronics problems we’ve been having recently, so we’ll keep charging.”

Ulrich switched to Suzuki for the 2015 MotoAmerica season, and the team continues to develop the new bike. He missed out on Superpole 2 qualifying Saturday, though, and had to start 13th Sunday. But in the first race, Ulrich was able to make a good start and charge through the field.

“It was good,” Ulrich said. “The bike started working pretty well, and we started going good. I beat my row and moved up into the next row and then quickly got through those guys, but the problem is by the time that happens the leaders are going away.

“Qualifying down there in 13th really hurt us. It’s tough when you’ve got the speed but get stuck behind two or three guys.”

Ulrich was helped by a red flag midway through the race, when he restarted ninth.

“We got a good start and got a better grid position after that red flag,” Ulrich said. “That was really important.

“We found a decent setting and got me more comfortable, and I went faster than I qualified.”

Ulrich didn’t get the benefit of a restart in the second race and instead caught himself in a tight battle with Tyler O’Hara that hampered his pace.

“I needed a better grid spot so I could get myself out of the muck,” Ulrich said. “I had the pace but just got out-broke a lot. I’d get next to (O’Hara), get inside him, and we had a nice duel, but it’s definitely very difficult.” 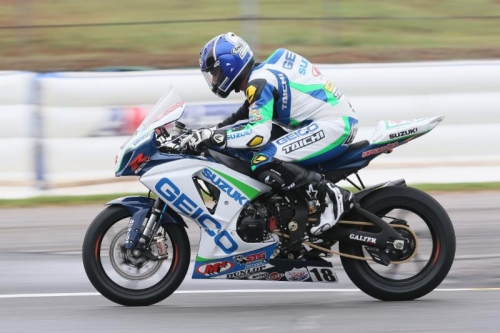 Ulrich and the GEICO Suzuki team return to action at Road America in Elkhart Lake, Wis., on May 29-31.

“We’ll go to Road America and started better and get stronger,” Ulrich said. “We’ll work and move up.”