“We have steadily been improving through the weekend and closing the gap on the guys in front of us,” Ulrich said. “We had two positive days so far. In Superpole 1, we kind of missed it. We needed a couple more tenths, which we just didn’t have. Everything has been working really well so far this weekend and we have been improving on the bike, which also helps me to improve myself.

“You can see the improvement as the performance goes through the weekend, so I’m looking forward to completing two strong races tomorrow. I’m feeling really optimistic that we can improve on where we qualified for sure and then get fighting with those guys that are fighting over fifth.”

The 11-turn Mazda Raceway Laguna Seca is known for a section called the “corkscrew,” a downhill plunging complex that makes the race challenging for the riders and thrilling for the spectators.

“This track is very physical, but it’s such a great area and great vibe in the paddock,” Ulrich said. “You have so many international fans and people from all over the U.S. It’s nice to race in front of a big crowd and in front of the international guys and see all your friends you don’t normally see around the racetrack and put in that good result.”

MotoAmerica is sharing the weekend with the teams of the World Superbike Championship, and Ulrich relishes to race in front of the world’s best.

“I’m having some fun and enjoying the Laguna Seca weekend with the World Superbike guys,” Ulrich said. “It’s nice to make progress and move forward. It would be really nice to have both bikes running well all weekend. Knock on wood, it looks like we have solved all of our electronic problems that we have had in races earlier this year. It’s also a great confidence booster when things are running smoothly. I need to keep working on me, working on the bike, and then I can ride to my potential.”

The goal in Sunday’s races is to continue to inch toward the top Superbike riders.

“We were so close to the guys in front of us today that I know I can latch on and race with them, so that’s the goal,” Ulrich said. “Accomplishing two solid finishes tomorrow would be good coming out of here, especially with all of the progress we have made with the electronics and the bikes.” 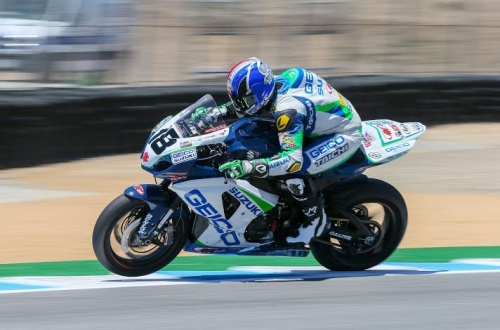