BIRMINGHAM, Ala. (June 14) — GEICO Suzuki racer Chris Ulrich persevered to a pair of top-seven finishes in the MotoAmerica (AMA/FIM) Superbike Challenge on Sunday at Barber Motorsports Park, bouncing back from a difficult weekend at Road America.

Electronics gremlins forced Ulrich off the track in both Road America events two weeks ago, but he showed good pace, persistence, and physical fitness in finishing sixth in the first Superbike race at Barber and seventh in the second.

“I’m proud of the team,” Ulrich said. “We did a good job in the situation we’re in. I rode hard and now we can refine this package and move on to (the next race at) Miller (Motorsports Park). We know what we have and can make it better. We know it’s going to be consistent, and we’re going to be able to do the laps that we need in practice to be able to get results in the race.”

Ulrich and Team Hammer still had issues with the new Suzuki’s electronic control unit, forcing Ulrich to a second bike for the two races. The team has had no issues with the “black box” for more than two years but has gone through three this season alone.

“We had another Magneti Marelli ECU die this morning, and we essentially had to go to the ‘kit’ bike with one lap in the warm-up on it,” Ulrich said. “When the bike was working we could go faster, so we concentrated on that. The circumstances being what they are, it was still a pretty good day.”

Ulrich’s sixth-place finish in the first race could have been higher, but the scheduled 23-lap race was cut to 15 laps after a long red flag.

“It was a shame for us because I think the result would’ve been a little better,” Ulrich said. “We would’ve probably been top-eight (overall) in that race. The red flag stopped it for a crashed rider putting some fluid down on the track and it got called after 15 laps.”

Ulrich then battled for a top-six spot early in the second before settling for seventh in the Superbike class. 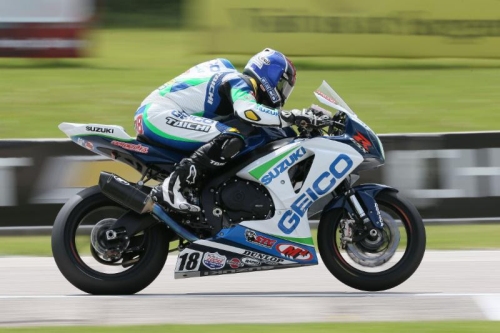 “I rode hard and did the best we could,” Ulrich said. “We had an issue in the second race with some engine-braking stuff, just chattering the back. I was with the group that was fighting over sixth for five, six laps and I just started fading off the back of it. I couldn’t stay there and maintain that, and that was the difference between being in the thick of that fight and finishing where I finished.”

Ulrich survived temperatures in the 90s and humidity above 60 percent Sunday, as his fitness allowed him to maintain speed throughout the day.

“It wasn’t that bad,” Ulrich said. “If you do your preparation you’ll be OK, and that’s what I did. It helped that the first race was cut short a little bit. That made it a little easier in the second race. Still, 40 minutes in the heat twice a day, wearing leathers, is definitely challenging physically, but I was up to it today.”