BIRMINGHAM, Ala. (June 13) — Chris Ulrich and the GEICO Suzuki bounced back from a tough race at Road America with a solid 10th-place qualifying effort Saturday for the MotoAmerica (AMA/FIM) Superbike Challenge at Barber Motorsports Park. 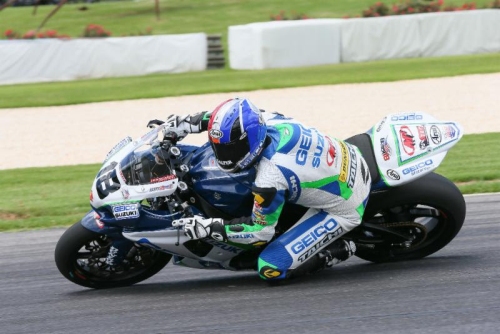 Gremlins forced Ulrich to the sidelines in both Superbike races at Road America, but those have been fixed, and after showing good speed at Barber, Ulrich is ready for raceday on Sunday.

“I think our race pace for tomorrow is good, and I’m looking forward to two very long, hot races to move up,” Ulrich said. “My goal this weekend is to get out of here with two solid, top-10 finishes, get some points and build on that for Miller.”

Team Hammer has fought electrical issues with the new Suzuki, but those appear to be in the past, allowing Ulrich and the team to fine-tune the chassis and ring more speed out of the GEICO bike.

“I need to be farther up there, but we’re in the hunt for the top six, and I’m happy about that.”

Ulrich was able make it to Superpole 2 qualifying with the fastest Superbikes on Saturday by posting the quickest lap around the 17-turn, 2.38-mile course in Superpole 1 (one minute, 28.352 seconds).

“It went pretty well,” Ulrich said. “It was a little frustrating this morning, but we regrouped in the afternoon and used the Q1 session to get through to Q2.”

“I lay down a time right away, and then there was a big delay,” Ulrich said. “A rider had oiled the track, so there was a lot of oil-dry. I was P9, but I got bumped right at the end. Another row up would’ve been good, but I was uncomfortable braking on that oil-dry, so I failed to improve on my time.”