Ulrich and his race team have shaken off a disappointing race at Road America two weeks ago, fixing electrical issues that forced Ulrich to the sidelines in both races.

“We’ve been working really hard to resolve the issues we had at Road America,” Ulrich said. “But the long and short of it is we’ve got it fixed and we’re looking forward to Barber.”

Ulrich and Team Hammer have a solid history at Barber, giving him good vibes heading into this weekend’s race.

“I always seem to do well and raise my level at Barber,” Ulrich said. “It’s a track that suits my style and is a home away from home track. Our other shop is in Alabama and I’ve spent a lot of time there.

“I really like Barber. It’s got a great museum for the fans. There’s a Team Hammer bike in the museum, so I’m really proud of that.” 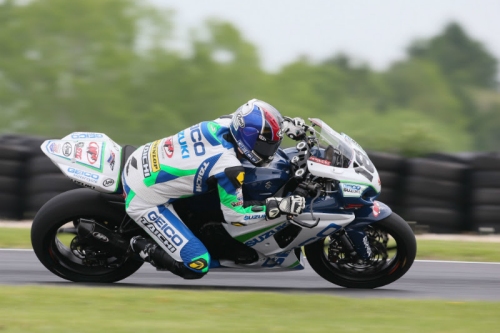 “It’s one of those tracks where you’ve got to be pretty patient,” Ulrich said. “You’ve kind of got to go slow to go fast. It’s unique.

“I really enjoy Turn 1 and over to Turn 5, that section that comes over the hill in Turn 3. You can make up a lot of time there.”

Another factor could play into Ulrich’s favor this weekend: the weather. Temperatures are forecast to be in the mid-90s with high humidity.

“The one thing about Barber Motorsports Park is it’s one of the most physically demanding tracks on the circuit,” Ulrich said. “We’re going to have two 23-lap races on Sunday, and it’s going to be in the mid-90s, so like VIR, it’s really going to test your physical training.

“I feel like I train hard for these kind of events. It’s hard, though, because if you don’t live in this kind of environment, it’s hard to replicate. I’ve been the guy at the gym wearing a long sweatshirt and long pants just to try to simulate the heat and that environment.”