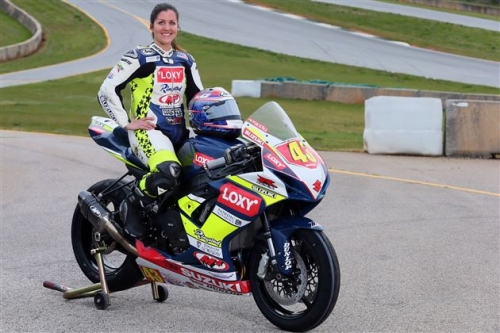 Olsen will compete under the M4 LOXY Suzuki banner and brings an impressive overseas racing resume. She is no stranger to the American scene. The 2011 Norwegian Superstock 600 champion, Olsen registered two seasons of AMA Pro SuperSport duty in 2013 and 2014, scoring her first top-15 result in AMA action at Mid-Ohio in ’14.

After mounting another race-winning, title-contending campaign in last season’s Norwegian championship, she returned to the United States as a wild card entry in the 2015 season finale at New Jersey Motorsports Park. Riding a M4-prepared LOXY Suzuki GSX-R600 that weekend, Olsen demonstrated her genuine potential to Stateside observers. She notched up a pair of top-ten finishes in Superstock 600 competition at NJMP, including a sixth-place run that saw her clock the race’s third fastest lap.

The Halden, Norway native is now determined to build on that late-season momentum and fulfill her promise with a full season aboard that same package in 2016.

“I couldn’t be more happy to be riding for the team. We did a wild card round last year at New Jersey and it went very well,” Olsen said. “It was a great bike and the mechanics were very good, too. This will be my first full year after a gnarly accident in 2013 so I am very excited to be back. I’m happy and honored to race in America and looking forward to a great year. It’s a tough field and will be very challenging. We need to focus on being at the top of our game at every round my goal is to be consistent and progressing each time out. I think being a top ten competitor is a realistic goal for us in a tough class like this.

“I’d like to thank LOXY, Ringstad, Sons of Norway, Nordic Naturals, Burton Volvo, Dainese and Arai helmets for making it possible for me to race,” Olsen continued. “I want to say a special thanks to Jason Pridmore for staying by my side, helping me get back to racing after my shoulder injury. I wouldn’t be here today without him. Also, I really thankful to team owner John Ulrich for the opportunity. The Suzuki is great and it fits me well. I think we can pick up where we left off at New Jersey last year.”