Team Hammer went from strength to strength at the second round of the AMA/FIM North American Road Racing Championship this weekend at Road Atlanta. Following last weekend’s podium-earning opener, the squad combined to score its 140th, 141st, and 142nd AMA Pro National podium finishes during the weekend’s action in Braselton, Georgia.

Once again leading the charge was series rookie Valentin Debise. The 23-year-old Frenchman not only kept his perfect MotoAmerica podium record intact, he one-upped his Austin third with a pair of runner-up results in the weekend’s twin Supersport races. 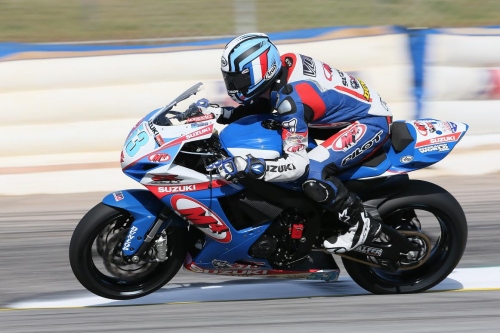 After qualifying second aboard his M4 SportbikeTrackGear.com Suzuki GSX-R600, the French ace twice pulled free from third to claim clear second-place finishes, underlining his potential to challenge for this year’s title

Debise said, “In the first race, I pushed hard every lap from the beginning and tried to catch the leader. Ultimately, he proved impossible to catch. The second race was similar, but really, I couldn’t honestly ask for a much better result this weekend. What we were able to do here on my first race weekend at Road Atlanta was much higher than our expectations coming into the round. I’m very happy with these two second-place finishes. It’s just amazing.

“I want to say a big thank you to my team. They did a great job and gave me the bike that I wanted, and I did everything I could to run fast lap times and get the best finish possible. It was a great weekend for us.”

17-year-old Xavier Zayat also added to the team’s celebrations, claiming a third-place finish in Sunday’s Superstock 600 contest. The up-and-coming American rider qualified with the fastest time in the category and looked set to take the Saturday Superstock 600 win but crashed with just over a lap remaining.

He bounced back on Sunday to put his M4 SportbikeTrackGear.com Suzuki GSX-R600 on the box with his third-place result.

Teammate Cameron Petersen also impressed on the weekend. The South African secured two additional top-five finishes in the Supersport class with a Saturday fourth and a Sunday fifth.

Unfortunately, the team’s Superbike pilot, M4 Suzuki’s Chris Ulrich, was unable to compete at Road Atlanta. The Californian attempted to grit out the weekend with a damaged shoulder and qualified his M4 Suzuki GSX-R1000 17th on the combined Superbike/Superstock 1000 grid, but was forced to pull out of Sunday’s two main events.

Ulrich said, “I aggravated my shoulder when I crashed last weekend at COTA, and it came to a head at Road Atlanta. I tried to power through but decided that I had to pull out after the morning warm-up. I’m going to get it checked out this week and we’ll know more about my status in the days ahead.”

Team Hammer will be back in action in two weeks, as Round 3 of the AMA/FIM North American Road Racing Championship will take place on April 29-May 1 at New Jersey Motorsports Park.