DEBISE RETURNS TO TEAM HAMMER FOR 2017

DEBISE RETURNS TO TEAM HAMMER FOR 2017

Team Hammer has re-signed Valentin Debise to battle for the 2017 MotoAmerica AMA/FIM North American Supersport title aboard a Suzuki GSX-R600. 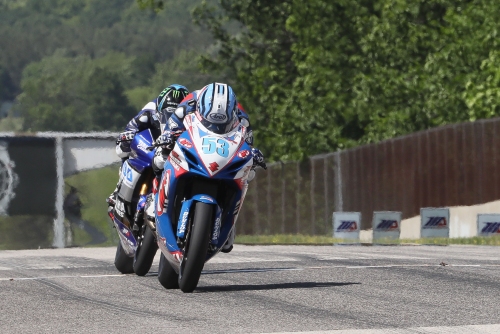 In 2016, the 24-year-old Frenchman every bit lived up to his billing as a top-flight talent with extensive international racing experience. In his debut American season, Debise shocked the paddock with an 11-podium campaign, good enough to secure a top-three year-end ranking in the Supersport class.

Debise was not only fast but consistently so, despite continually being up against unfamiliar venues. He managed to finish on the podium at every stop on the tour, including a maiden victory at Road America and five additional runner-up results.

“I didn’t know what to expect when I first came to America,” Debise said. “I was far from home, all alone, and not sure what I could do. Fortunately, I found a great team that supported me even when things were the most difficult. I stayed calm, trained hard, and pushed as hard as I could. It all paid off and together, we finished on the podium in every round. I could not be more proud of what we accomplished in 2016.

“I’m excited to come back in 2017. MotoAmerica has great racing and fantastic fans. We’re going to use what we learned last year and do everything we can to challenge for the championship.”

Team manager Chris Ulrich said, “We’re excited to have Valentin on the team for 2017. We think there’s great potential in the season ahead. Valentin had never seen the U.S. tracks before and still earned 11 podiums and a win, so we think Valentin can do even better this year.

“He’s already a consistent front-runner and now he won’t be giving FP1 away while learning the track. He’s a very good technical rider and has helped us develop our GSX-R600. The team has a great history in this class and with Valentin, we’re looking to keep raising the level of our program. We like his consistency and are looking forward to having a good year.”