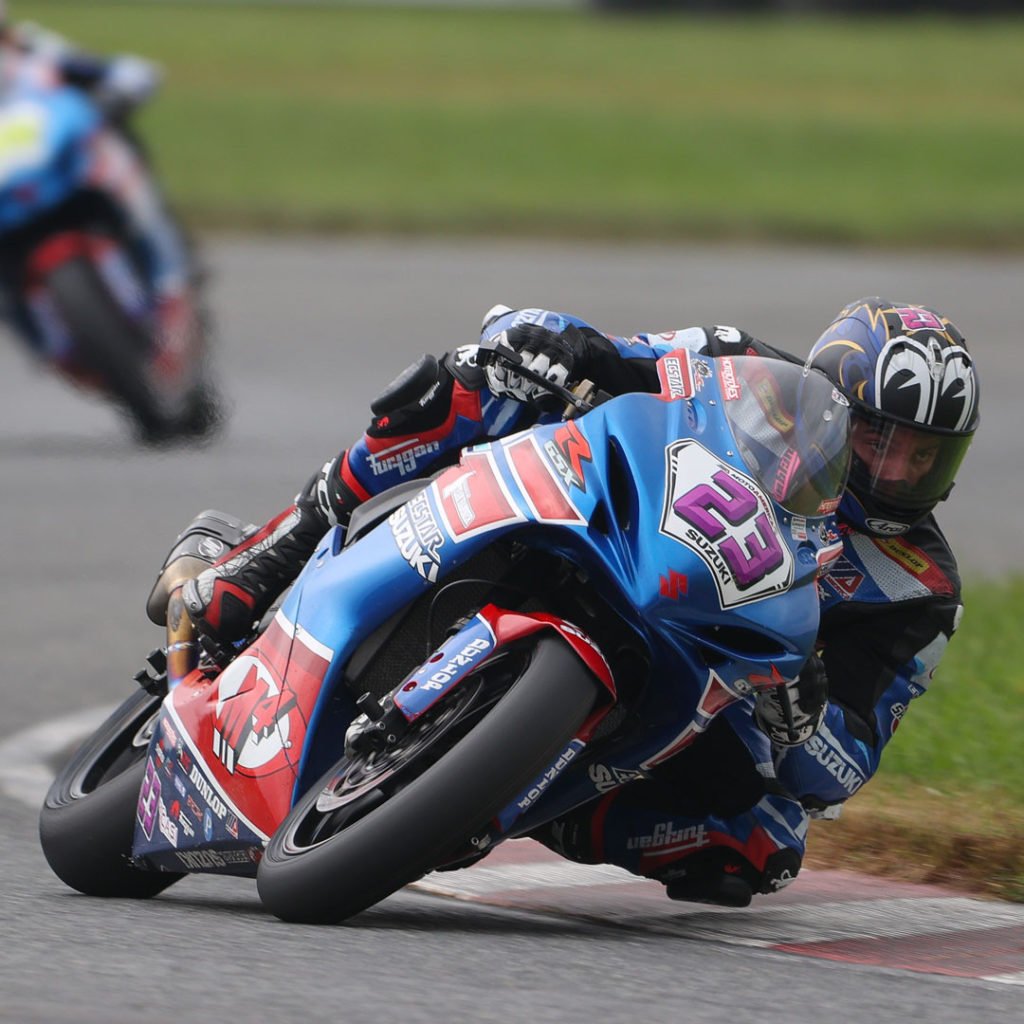 Team Hammer came through on Saturday at New Jersey Motorsports Park, thanks to late-race heroics adding three more podium finishes to its results this MotoAmerica season.

Despite struggling in the lead-up to Saturday’s Superstock 1000 race, M4 ECSTAR Suzuki’s Jake Lewis stepped up his game when it mattered the most. The Kentuckian overcame his fourth-row starting position and steadily worked his way into the battle for STK1000 victory aboard his GSX-R1000.

With four laps remaining, Lewis passed his primary championship rival to secure second place (eighth in the combined Superbike/STK1000 order) and simply ran out of time to climb any higher.

Lewis remains second in Superstock 1000 championship points after his 14th podium of the season. Afterward, he said, “It was a good race. I got off to a really good start and was right there with the front Superstock guys. I fell back a little bit in the early laps because I got stuck behind another rider, but then I worked really dang hard to catch back up to the fight for the win.

“I started making up ground and caught up to them a little bit at the end. I got held up behind second for a lap or two and that allowed the leader to keep going the same pace and get away a bit. I didn’t have enough for him there at the end but I’m happy to get second after what’s been a pretty tough weekend for us. It was a really good recovery from practice and qualifying because we’ve been a little behind the 8-ball. We’ll make some changes tonight and try to get the win tomorrow.”

Lewis’ M4 ECSTAR Suzuki teammate, Valentin Debise, saved it for even later to claim second place on his GSX-R600 in the Saturday MotoAmerica Supersport race. Debise hounded his opponent until the final lap, then took away the spot and hold it to the flag by 0.069 seconds.

It was Debise’s third straight second-place result, his seventh finish of second or better this season, and his 11th podium in 2017. He sits third in the points with three races remaining.

The Frenchman said, “I wanted to follow the leader but he was too fast. I didn’t have a great opening lap and the top two riders gapped me a little bit. I came back on second, and I stayed just in back of him to see where I could pass him. At the end we got into some lappers. I tried to overtake him and he overtook me back. We had some big moments, and finally I made a pass stick.

“Once again, I want to say thank you to M4 ECSTAR Suzuki team who did a great job as always.”

M4 medAge Suzuki’s Nick McFadden pulled out a last-lap ace of his own in the Superstock 600 competition. The Kentuckian executed a slick move aboard his GSX-R600 in the race’s second-to-last corner to move into third position (seventh overall).

McFadden now has six podiums on the season and sits 3rd in the STK600 title fight. He said, “I’m happy to be up on the podium again. We got off to a good start, and we were in the lead pack. It looked like we were breaking away a little bit but then there was a red flag. On the restart, we ran in the lead pack again. Towards the middle of the race, I was behind a rider who was starting to fade a little bit. I was able to pass him but had to make up some ground so I put my head down. With two corners to go, I made the pass for third. It’s been a good season. We’ve been on the podium a lot and and I am looking forward to adding to it these last three races.”

M4 Rickdiculous Racing Suzuki’s Daytona Anderson returned to action with a solid sixth place in Supersport (13th overall). Anderson ranks 10th in the Supersport championship rankings despite illness and injury sidelining him in the prior four races.

M4 ECSTAR Suzuki’s Brandon Cleland added another Superstock 600 top-ten to his 2017 record — his seventh in all — by finishing 10th (17th overall) in Saturday’s race. He is currently 10th in the STK600 title fight.

Team Hammer will look to win more trophies and move further up the podium on Sunday, the final day of the penultimate round of the 2017 MotoAmerica AMA/FIM North American Road Racing Series.