LEWIS CHARGES TO THE PODIUM AT LAGUNA SECA 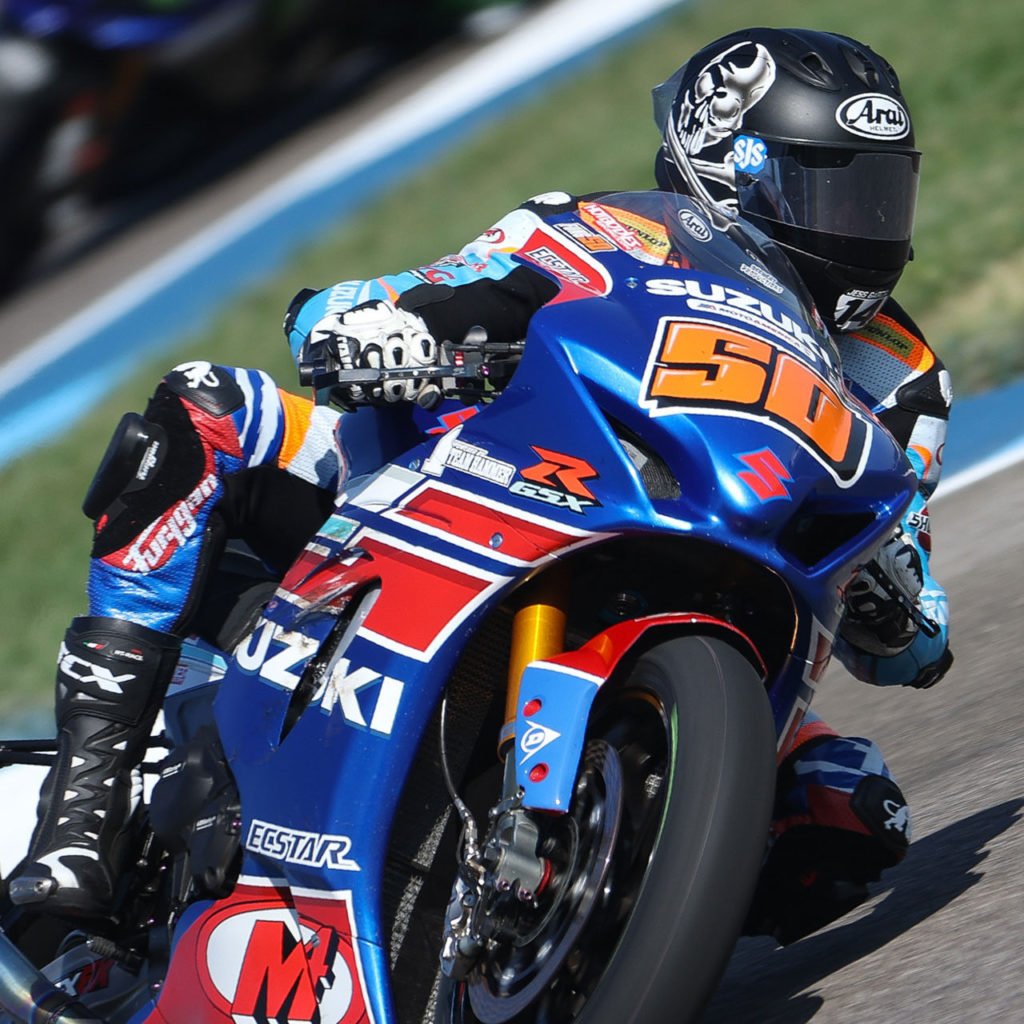 Team Hammer kicked off the weekend’s race action at Laguna Seca on Saturday with a podium finish thanks to a come-from-behind performance courtesy of M4 ECSTAR Suzuki’s Jake Lewis.

Lewis was forced to claw his way through the field aboard his 2017 Suzuki GSX-R1000 after starting from Row 4 due to a crash during Superpole. His mission to finish up front was further complicated when an opening-lap incident in front of him forced him wide and even deeper into the pack.

Following the opening lap, Lewis found himself outside the top 15. Undeterred, the lanky rider kept his head, relied on his superior pace, and systematically worked his way forward.

He made his final pass in the race’s very last corner, driving around the outside of a title rival to take the checkered flag placed third in the Superstock 1000 race (sixth overall on the combined Superbike/STK1000 order) with second-place just bikelengths ahead.

Lewis said, “It was a good result for us since we were on the podium again. I got a bad start; there was an incident in Turn 2 that ran me wide and shuffled me to the rear. I came around after the first lap down in 16th, but I knew it was going to be a long race.

“I stayed calm. I knew I had a good bike and a good race pace, and just worked on picking guys off and moving forward. There were a few times where I had to wait before making a pass and I think that probably cost me second. We salvaged a podium so it was a good result in the end and we got some good points, which is important because we’re still in this thing. I can’t wait to get back out there tomorrow because I really feel I can win.”

The podium finish was Lewis’ ninth in 11 races this season. He currently sits second in the Superstock 1000 championship battle.

Lewis will be joined in his quest for the top of the podium on Sunday by Team Hammer’s 600cc contingent. With just one Supersport/STK600 race during this combined MotoAmerica/WorldSBK weekend, final grid positions were sorted out Saturday afternoon.

M4 ECSTAR Suzuki’s Valentin Debise will be looking to add to his season tally of two wins and six podium results from the outside of Row 1. The Frenchman was third in qualifying at 1:26.824.

M4 Rickdiculous Racing Suzuki’s Daytona Anderson and M4 medAge Suzuki’s Nick McFadden will line up just one row behind Debise. Anderson qualified fifth at 1:28.401 as he continues to readily adapt to the team’s GSX-R600. McFadden will slot in alongside in sixth, throwing down the fastest qualifying lap among all Superstock 600 competitors at 1:28.632.