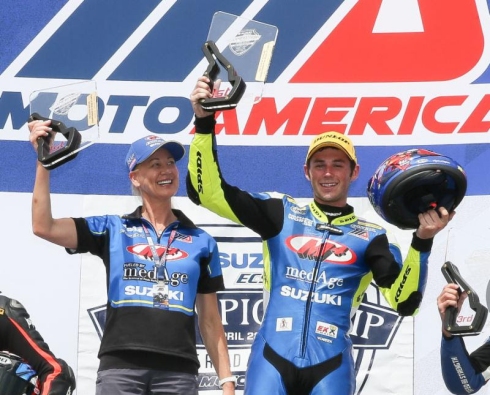 Dr. Laura Ellis and Nick McFadden celebrate on the MotoAmerica Superstock 600 podium at Road Atlanta in 2017. McFadden will bump up to the Supersport class with Team Hammer in in 2018. Photo by Brian J. Nelson

Dr. Laura Ellis and Nick McFadden celebrate on the MotoAmerica Superstock 600 podium at Road Atlanta in 2017. McFadden will bump up to the Supersport class with Team Hammer in in 2018. Photo by Brian J. Nelson

McFadden will again compete aboard a Team Hammer prepared and fielded Suzuki GSX-R600 under the M4 medAge Suzuki banner.

McFadden is coming off a breakthrough season in 2017, which saw the 20-year-old Owensboro, Kentucky, native finished third in the Superstock 600 title fight on the strength of two wins, four runner-ups, and 10 total podium finishes, despite missing races after breaking his right collarbone mid-season.

McFadden has long been regarded as one of the future stars of the sport. During an amateur career that kicked off at the age of four, he racked up numerous flat track and road racing titles, culminating with being named the 2011 AMA Youth Road Racer of the Year. He scored a podium finish in his AMA Pro Road Racing debut with a third-place finish in what was then called the SuperSport category at Barber Motorsports Park in 2013.

McFadden added two MotoAmerica Superstock 600 podiums-one each in 2015 and 2016–before emerging as a fully-fledged STK600 title contender last season in his first season with Team Hammer.

In 2018, McFadden will take another major step forward by contesting for the MotoAmerica Supersport Championship alongside teammate Valentin Debise.

Aiding in that transition has been Dr. Laura Ellis and her team at medAge, by developing leading-edge protocols in the fields of athlete physical/mental/emotional strength and readiness training as well as in sports nutrition and hydration.

Dr. Ellis said, “Nick has been on the medAge Athletic Optimization Training Protocol since September, 2016. He has progressed to advanced mental-focus training and achieved phenomenal results in neurophysiologic control. His customized sport-specific physical fitness and nutrition programs are added elements that will allow him to be exceptionally competitive with this very challenging field of riders in the 2018 season.

“Additionally, the new medAge TBI Protection Protocol is in full effect this season, and Nick is our first motorsport athlete to experience its benefits. It is our privilege to work with Nick for a second season alongside a talented M4 medAge Suzuki crew and with an excellent Supersport bike.”

McFadden said, “2017 was a great year with the team, and we proved what we could do. We got some great results together and I am super excited about returning for 2018. It’s cool to be able to move up to Supersport and race head to head against some of the Supersport guys I’ve chased around in the past when I was in Superstock 600. I feel like we have developed a good platform from last year to start off this season and continue making progress. I think we are going to prove we are strong and get good results all year. The new rules package will benefit the team as well.

“This opportunity is a good one for me and in addition to working with the M4 team again, I’ll be back with medAge and Dr. Laura Ellis. I’ve really benefited from the training aspect, and I’m sure the mental training will continue to pay off as well. Earlier in my career, I had a hard time harnessing my focus. Last year, I felt we had a breakthrough working with medAge and I was able to perform my best when it mattered the most.”

“Nick made a big step last year, joining the team and focusing on his training with Dr. Ellis and Trina Pistor from medAge and working hard on his riding skills with Ken Hill,” said Chris Ulrich, Team Hammer Vice President of Operations/Talent Scout Chris Ulrich. “We took on Nick as a development rider and were quickly rewarded with two wins, 10 podiums and third in the championship. Anyone would categorize that as a professional breakout year! We’re looking forward to bumping Nick up to MotoAmerica Supersport and think he will rise to the occasion.

“On a personal note, it is really good to see a young rider put in the work and then reap the rewards as Nick has done,” Ulrich continued. “It shows everyone what Nick can achieve with his talent and hard work and it shows what our organization can do as well. Also, Nick had to change his number when he first came to race AMA Pro but this year he was finally able to secure the number 18. That’s also my old number, so it is nice to see it stay in the Team Hammer family.”

The 2018 MotoAmerica season will kick off at Road Atlanta on April 13-15 in Braselton, Georgia.