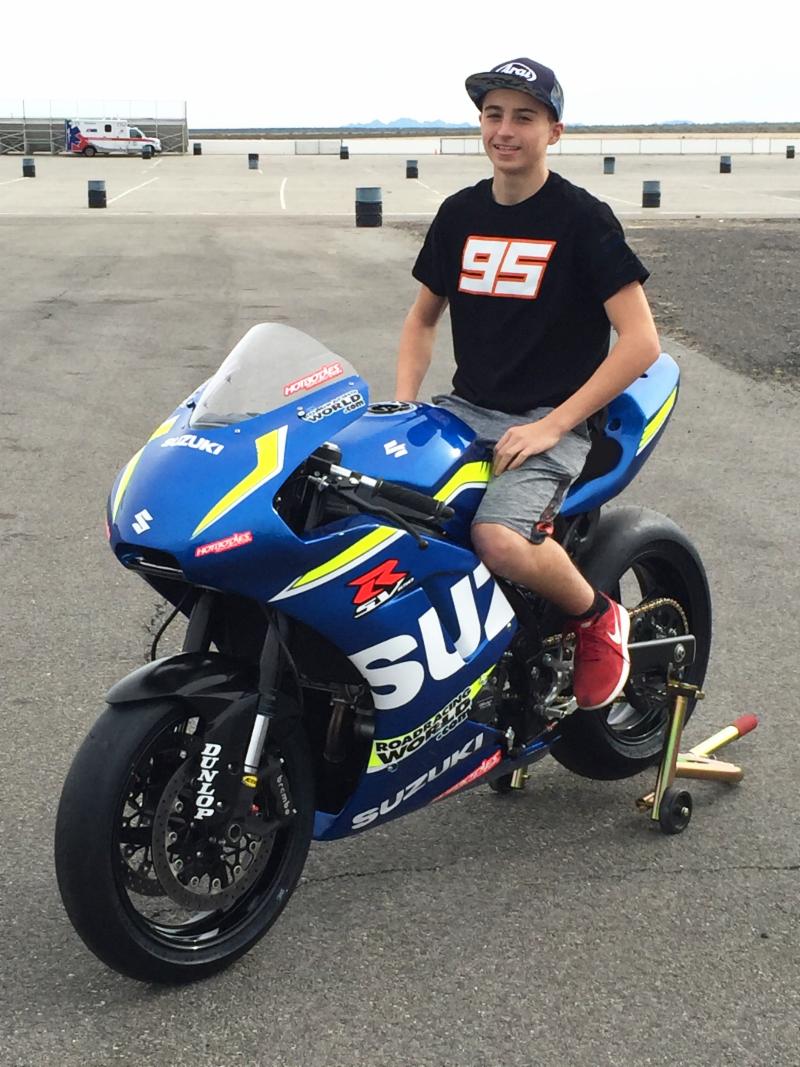 Team Hammer, Inc. is excited to announce that it has signed reigning MotoAmerica Junior Cup Champion Alex Dumas to a two-year contract to compete in the MotoAmerica AMA/FIM North American Road Racing series.

The 16-year-old French Canadian joins the effort under a new Roadracing World Young Guns Scholarship program which will see him compete in the 2019 MotoAmerica Twins Cup Championship aboard a Team Hammer Technical Services-supported Suzuki SV650.

Over the past two seasons, Dumas has firmly established himself as one of the brightest up-and-coming prospects to hit the MotoAmerica scene in some time.

In 2017, the youngster demonstrated his potential with four consecutive KTM RC 390 Cup race victories late in the season to secure a spot in the championship top three.

And last year, he took the next step in his rapid progression by dominating the inaugural Junior Cup. He won 10 of 17 races en route to earning the title with 74 points in hand. Dumas capped off his championship-winning season with a wild card entry in the French round of the World Supersport 300 series.

A native of Québec City, Dumas is also a standout in ice racing and dirt track.

Dumas said, “I’m thankful we had three great years with KTM. Now that it is time to move up, I am really happy that John and Chris Ulrich have given me a great opportunity with the new Roadracing World Young Guns Scholarship program they are running with Team Hammer technical support. I got to test with the team twice already and we really clicked. It is going to be an amazing two years. I rode a Roadracing World Project Bike SV650 V-Twin in a test at Chuckwalla and I loved it. Getting to learn the Twin before moving up to Supersport will be a good thing for me. I couldn’t be happier for this opportunity.”

Team Manager Chris Ulrich said, “We’re really excited to be working with Alex in 2019, through the new Roadracing World Young Gun Scholarship program. We’ve closely watched Alex in the KTM RC Cup and the MotoAmerica Junior Cup and he has a solid resume. After the 2018 MotoAmerica season, he tested with us successfully and it was clear to us he has a promising future and is the type of young rider we think we can help with the new program, which focuses on building skills and confidence.

“We wanted to try something with Alex that allows him to gain experience on a bigger bike with less pressure than jumping straight into the Supersport class. He will get to learn in a supportive environment on a strong team and adapt to a bigger bike than he raced in the Junior Cup. He is the test case for what we think it is a sensible plan for a talented young rider seeking to establish a professional career, and we look forward to applying the same approach with other young riders in the future.”