FONG AND KELLY BOTH ON THE PODIUM AT ROAD ATLANTA 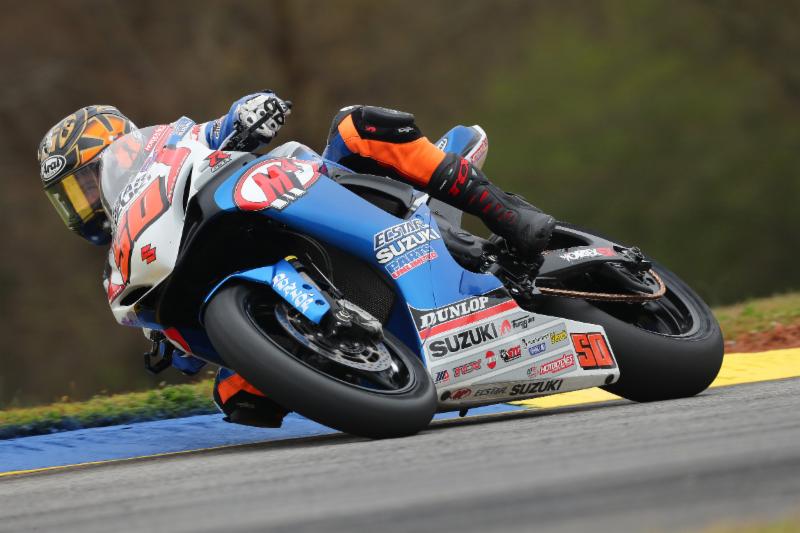 At Daytona, it was young gun Kelly who claimed pole position and finished as the race’s runner-up. Today in Atlanta, it was Fong who took those honors.

The 28-year-old multi-time MotoAmerica race winner has demonstrated tremendous speed aboard his Team M4 ECSTAR Suzuki GSX-R600 all weekend long. He secured pole position by more than six tenths of a second, threw down the fastest lap of Race 1, and twice threatened to break away at the front.

Only a frenetic race in which Fong clipped a cone, lost his front fender, and ran wide while battling for the lead on more than one occasion could prevent him from climbing to top step of the podium.

After the race, Fong said, “We obviously wanted to win, but it was a fun race and we’re ready to do it again tomorrow. I’ve got to give it up to my team today. They provided me with an amazing motorcycle. It was definitely a winning motorcycle, and we’ll be back tomorrow for more.”

He earned himself a spot on the outside of Row 2 in qualifying and proceeded to clip nearly a full second off his qualifying best during Race 1. That additional speed allowed Kelly to fight as part of a four-rider pack contesting third position.

He ultimately won that battle at the checkered flag, kicking off his MotoAmerica career with a podium performance.

“What a way to start,” Kelly said. “I’m super happy with this podium. This is how we wanted to start. I don’t know if I was expecting the podium, especially after starting from sixth. But my bike was really good and we worked super hard. Yesterday was my first time here, so we’re still learning the track.

“I learned a lot racing with the guys today and gained a lot of knowledge. The fight was really, really hard, and we had a lot of close passes. I’m learning how to fight with these machines. I’m feeling really, really happy, and I’m looking forward to tomorrow.”

Team M4 ECSTAR Suzuki’s Superbike ace, Jake Lewis, did well to salvage a strong result after dealing with drama of his own. The Kentuckian qualified on the second row in Superpole, but was forced to start from dead last after missing the citing lap due to an electrical problem.

The issue forced Lewis to slowly roll off the line at the start — spotting the field several seconds — before he even reached the season’s first turn.

However, Lewis put his head down and charged forward throughout the race aboard his Team M4 ECSTAR GSX-R1000 Superbike. In the end, he made his way up to seventh at the checkered flag with sixth place firmly in his sights.

Meanwhile, Joseph Blasius notched up a top ten of his own, piloting the Autovest Suzuki SV650 to tenth after topping a practice session and clocking the third best time during the class’ opening qualifying session.

Team Hammer will look to add to its season-opening trophy haul as the MotoAmerica Road Atlanta concludes on Sunday.