FONG ON THE PODIUM IN UTAH

Home » FONG ON THE PODIUM IN UTAH 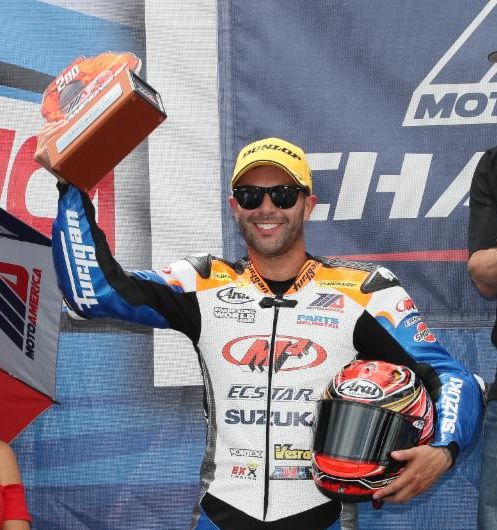 Coming off a remarkable 1-2 finish last time out at Road America, M4 ECSTAR Suzuki teammates Bobby Fong and Sean Dylan Kelly were once again battling for podium positions in the MotoAmerica Supersport category.

Fong got an outstanding launch off the front row of the grid aboard his Suzuki GSX-R600 and led the opening lap before settling into a strong second place lap two. From there he applied immense pressure on the race leader for the rest of the race.

The Californian showed his opponent a wheel in the race’s final corner, but there was no room to make a pass safely, forcing Fong to accept a runner-up result on this day, just 0.101-second off the win.

After claiming his fifth podium of the 2019 season, Fong said, “There were some spots where he was he was a little better than me, and other places I was a little better, and it kept changing as the race went on. I couldn’t quite get close enough to make a move, but I’m happy to finish second and get some points. We’ll move on to tomorrow. I think we can make some adjustments and get faster. But as for today, we’re on the podium and we can’t complain.”

Kelly was in the opposite position as he attempted to lock down the final spot on the podium. The 17-year-old made a move early in the race to take over third, at which point he found himself defending the position in a two-rider duel of his own.

He was relegated to fourth with just over a lap remaining and took the checkered flag in fourth position. Like Fong, Kelly will look for improvements overnight in hopes of keeping his record of securing a podium at every stop in his rookie season alive tomorrow.

Meanwhile, M4 ECSTAR Suzuki’s Jake Lewis registered one of his strongest rides of the Superbike season. He ran as part of a tight seven-rider freight train at the front of Saturday’s premier-class race aboard his Superbike-spec GSX-R1000 for just over half distance.

At that point, he gradually faded off the fight for the win, but continued on to solidify his position. Lewis was rewarded for his patience, gaining two positions late in the race to take his fourth fifth-place finish of the year.

Roadracing World Young Guns’ Alex Dumas was the fastest rider in the solitary Twins Cup practice on Saturday, putting his Suzuki SV650 on top of the charts by a full 1.188 seconds.

Team Hammer is looking forward to more success at UMC on Sunday!