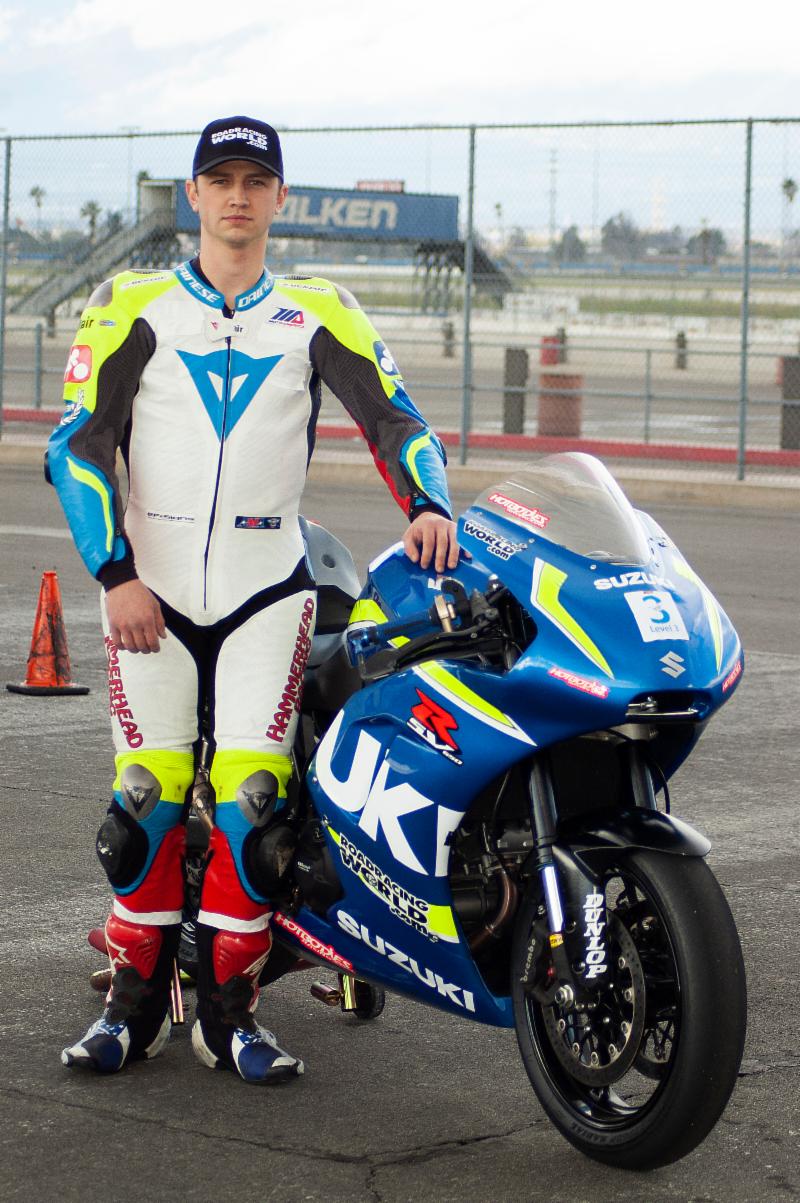 Blasius will team with former MotoAmerica Junior Cup rival Alex Dumas as the two step up to the MotoAmerica Twins Cup aboard a pair of Team Hammer Suzuki SV650s this season. Blasius will run under the Autovest Suzuki banner.

Despite getting a late start in racing compared to some of his competitors, 25-year-old Blasius has made rapid progress since buying his first sportbike a few years ago.

Blasius moved into the MotoAmerica Junior Cup in 2018 and steadily improved throughout the season. He took 11 points-paying finishes in all and claimed his four best finishes over the final five races of the season, including a pair of top-five finishes headlined by a podium result at New Jersey Motorsports Park.

“I’m really excited to join the team, knowing the history of the team and what kind of program the team runs,” said Blasius. “I’m excited to be on the SV650. It is new to me, but having ridden the bike, I am very comfortable already and expecting big things. I hope to be a contender in the class.”

“Joe comes to us from the Junior Cup,” said Team Hammer Vice President of Operations/Rider Scout Chris Ulrich. “We’re looking to help him refine his skills and further his racing career. The team wants to see what he can do in the Twins Cup, a sensible advancement for a rider who has shown speed and had some notable successes thus far. We’re here to help Joe reach his potential in a professional environment. He tested with us and he looked good and enjoyed the bike. We’re happy with his feedback and how things are going.”

Autovest is a private investment company acquiring distressed consumer automobile portfolios since December 2003. Autovest acquires consumer loan portfolios direct from Fortune 500 banks and automobile finance companies. The company currently holds more than $1.7 billion in charged off automobile debt.
Autovest’s disciplined collection philosophy is that of long-term collectability. Autovest utilizes exclusive scoring models and cutting edge skip-tracing tools to successfully analyze the cost effectiveness of pursuing individual accounts through litigation. This is essential in the success of collecting on automobile deficiency portfolios and has been reflected in Autovest’s continuous growth.
Autovest has established a strong network of relationships throughout the debt-buying industry. This includes relations with debt sellers, attorney firms, and collection agency centers. Autovest utilizes a state-of-the-art operating facility, allowing for centralized decision making and enhancing the automation of operations.