KELLY AND FONG EARN SECOND AND THIRD IN 78TH DAYTONA 200 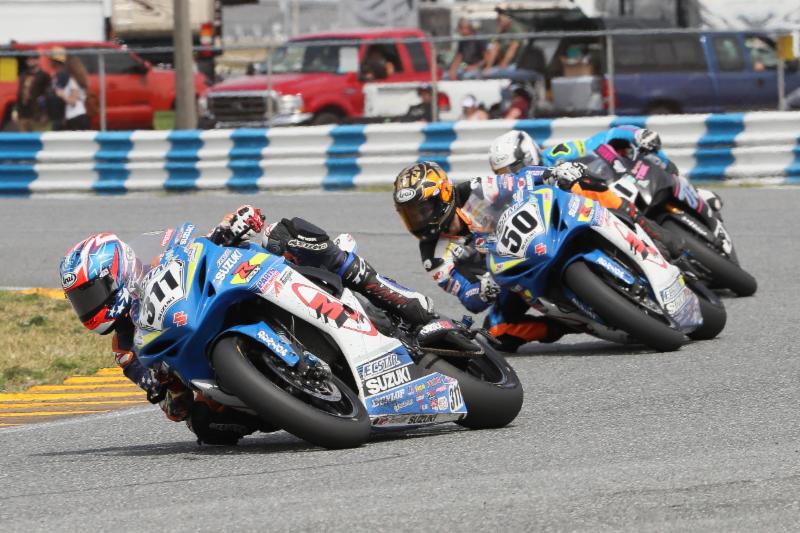 Team Hammer backed up its 1-2 qualifying showing with a spectacular double podium performance in the 78th Daytona 200 on Saturday afternoon at Daytona International Speedway.

Sean Dylan Kelly, who a day earlier became the youngest pole sitter in the storied history of the prestigious event, fought through adversity to emerge the runner-up at the conclusion of the arduous 57-lap race. He hit the stripe with the front wheel of his Suzuki GSX-R600 only fractionally ahead of M4 ECSTAR Suzuki teammate Bobby Fong, who took home third.

At one point, 16-year-old Kelly actually found himself a full lap down and seemingly out of contention. However, a late red flag provided him a second chance to make history. Kelly and Fong were among six riders who battled it out in a restarted four-lap shootout to decide the 200 miler. The two each took their turns at the front as riders in the tight pack slipstreamed one another while working out a variety of potential final-lap drafting strategies on the fly. Ultimately, both Kelly’s and Fong’s efforts proved good enough to end the day in Victory Lane.

Young gun Kelly said, “The race was going well, and I felt really good on the bike, but it got interesting for us there for a bit. We ran up front the first couple of stints, but on the second stop we had a problem with the front axle. When I got back out there, I noticed I was a whole lap down, even though I was racing on the track with the leaders. It was pretty disappointing at the time, and when I saw the red flag, I really thought the race had ended. I was even more disappointed then.

“But when I got back to the pits, they told me I might have another chance, because I was ahead of the leaders across the line on the lap they backed scoring up to when they did the red flag, which meant I had at that point unlapped myself and was back on the lead lap. When I heard that I felt like getting the boxing gloves out! I’m really happy we were able to recover. Those last laps really fun. I’m just happy I was able to show the pace and show that I could run up there. I’m pretty happy with the P2. We were pretty close to the win, and we’ll try to go one better next time around. The entire M4 ECSTAR Suzuki team, crew, and bike were absolutely amazing. I really want to thank the team for making this possible.”

Meanwhile, 28-year-old Fong established himself a contender for victory throughout the contest and led a string of laps just before the red flag was thrown. After taking a close third in the end, he said, “I have to give it up to my M4 ECSTAR Suzuki crew — they gave me a great bike and a chance to win this thing. I’m a little bummed not to get the victory after running so strong, but it’s still great to be on the podium. We’ll get them next time.”

Team Hammer will now turn its attention to start of the 2019 MotoAmerica season, which kicks off on April 5-7 at Road Atlanta.