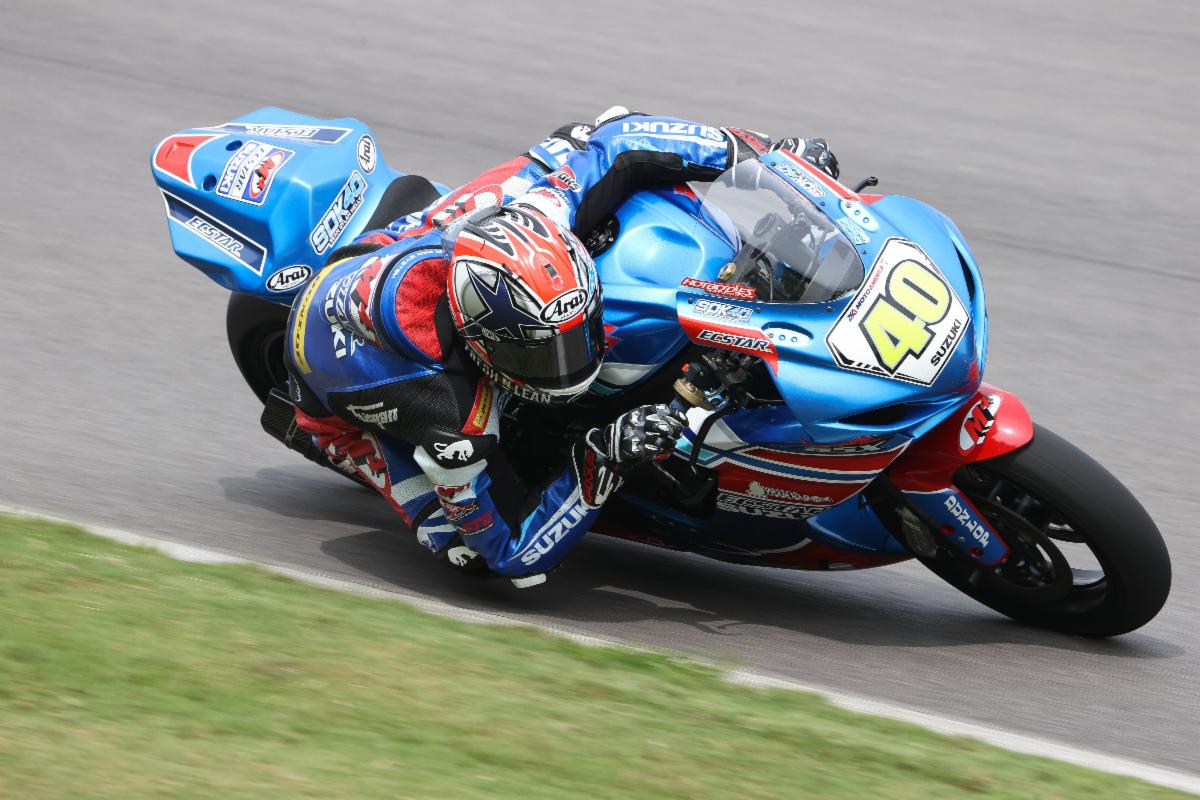 M4 ECSTAR Suzuki’s Sean Dylan Kelly put together another standout showing, racking up his 12th and 13th MotoAmerica Supersport podium results in succession on the weekend while adding to his season’s highlight film with more eye-opening outbraking maneuvers.

Twice the young Floridian battled hard for the lead aboard his M4 ECSTAR Suzuki GSX-R600 en route to runner-up finishes.

Kelly said, “We did what we could today, and I’m really happy with the progress we made all weekend long. We started off at a good spot and built from there. I’m satisfied with the work we did and we all gave our absolute best. This is the fastest I’ve ever been here and our pace was good the whole race.

“We need to keep on working and keep on fighting. The championship is still open. There are still points on the line and there are still four races to go. A huge thank you to my M4 ECSTAR Suzuki crew for all their hard work.” 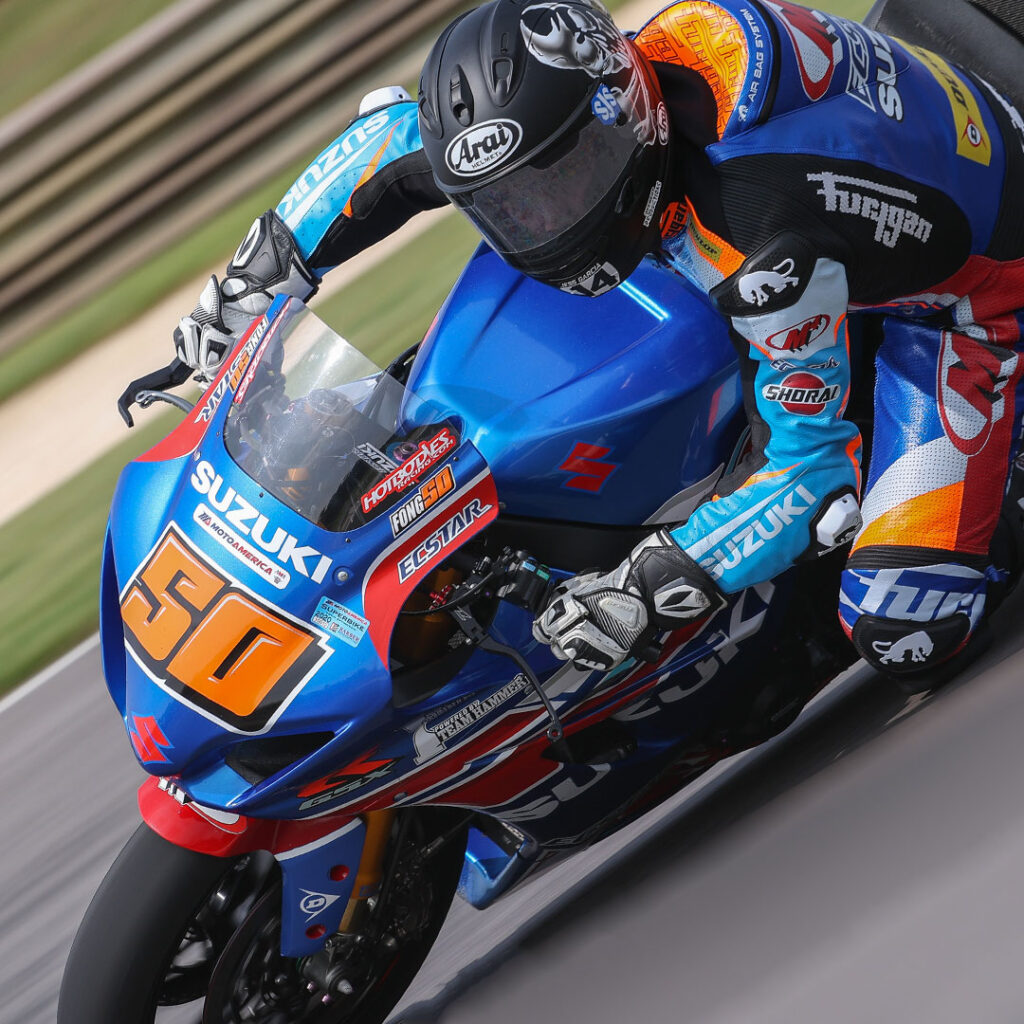 M4 ECSTAR Suzuki Superbike teammates Bobby Fong and Toni Elias combined for another strong outing in premier-class action. 2017 MotoAmerica Superbike champ Elias successfully built upon his first podium of ’20 at the prior round by pulling in a pair of fourth-place finishes in Alabama.

Fong, meanwhile, rebounded from a sixth-place run on Saturday with a podium performance on Sunday. The Californian made a late-race push to close to within one second a runner-up result on his way to third.

“It was a combination of everything,” Fong said of his overnight improvement. “My M4 ECSTAR Suzuki GSX-R1000 certainly runs strong at the end of a race. We’re going to go into Indianapolis with a little better of a game plan and hopefully be there to take advantage of our late speed in a race for the win. We’re going to give it our all next round.” 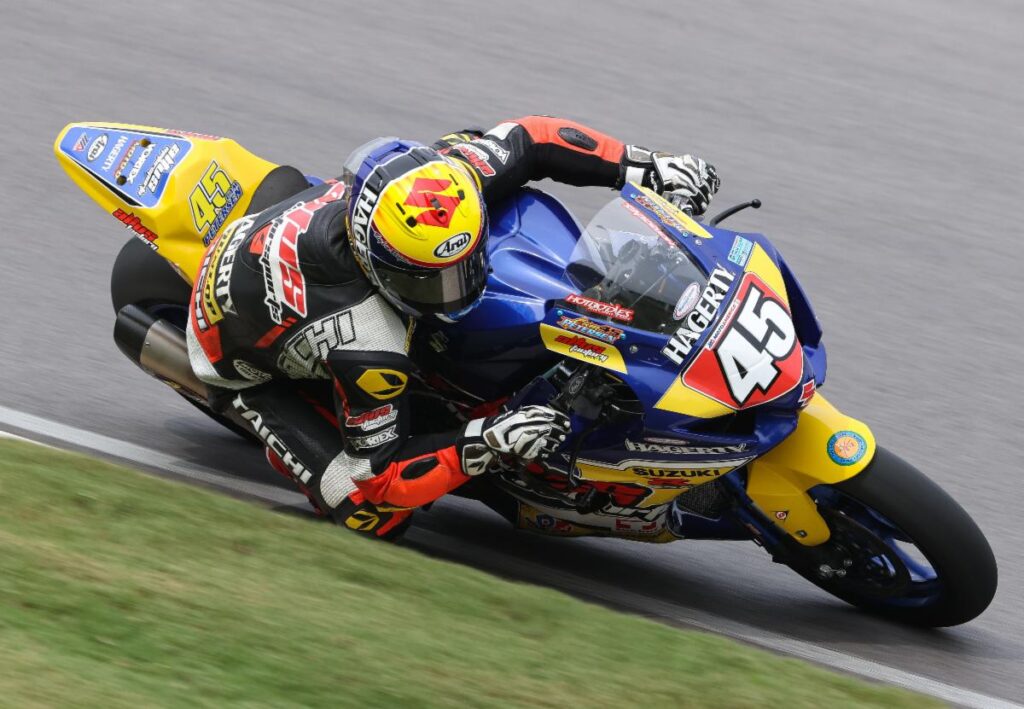 Cam Petersen (#45) did the double with two wins in MotoAmerica Stock 1000 competition.

The round proved to be a historic one for Suzuki’s official team in MotoAmerica competition. When he crossed the line to claim the checkered flag in Sunday’s Stock 1000 race aboard his Team Hammer-built GSX-R1000, Altus Motorsports Suzuki’s Cam Petersen registered the 100th all-time AMA Pro/MotoAmerica National race victory for racebikes fielded or built by Team Hammer.

South African Petersen did so in an appropriately dominant fashion, storming away with his sixth consecutive class victory. He later admitted that it wasn’t quite as easy as it looked. “Two laps in a row, I completely washed the front in Turn 5, but luckily I saved it on my elbow.

“It was another fun race and another great day. I can’t thank the Altus Motorsports team enough. They’ve given me such a machine and it seems like every weekend we keep getting better and better. My whole family is here other than my mom, who is back home watching. This one is pretty sweet.” 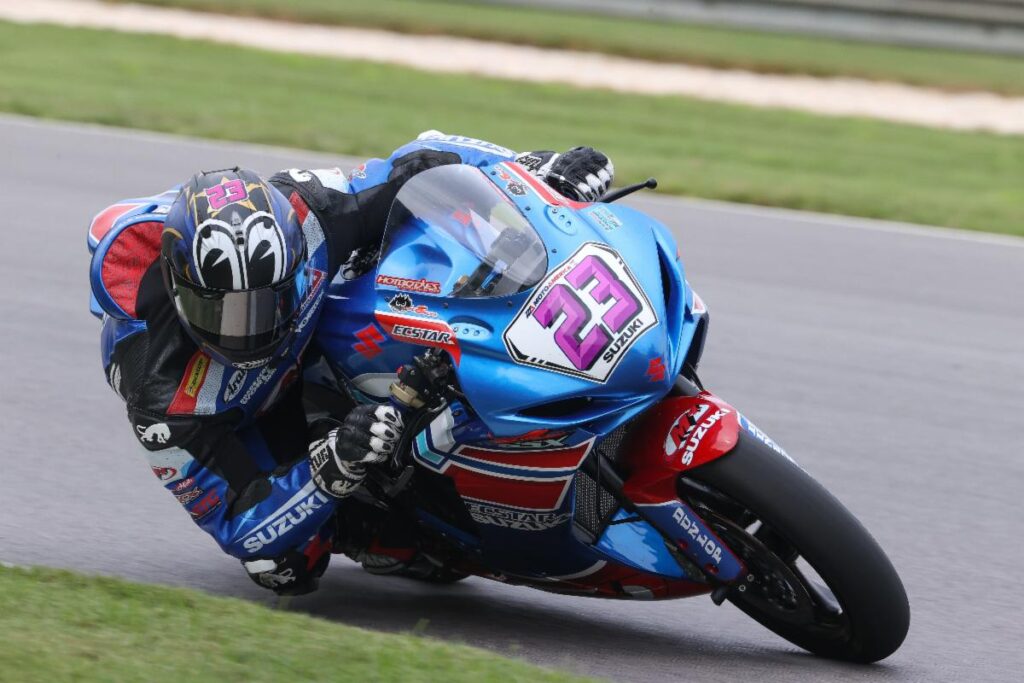 Lucas Silva (#23) stormed back from 15th to finish eighth on Sunday with his GSX-R600
M4 ECSTAR Suzuki’s Lucas Silva kept his season’s long run of Supersport top tens alive, despite fate attempting to intervene. Silva backed up his Saturday 10th with an eighth on Sunday — an eighth that only came after being run off track in a multi-rider incident that dropped him down to 15th position.

Silva spent the remainder of his race slashing his way up through the field, not making his final pass for position until the very final lap. 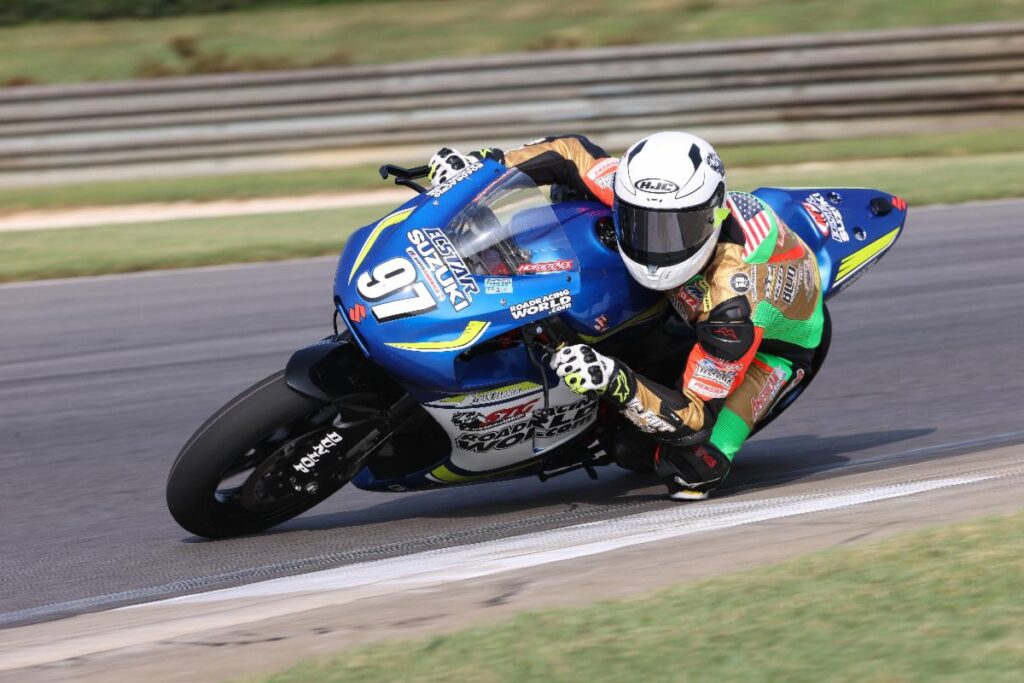 Rocco Landers (#97) dominated both Twins Cup races on his SV650.

Finally, SportbikeTrackGear.com Suzuki’s Rocco Landers — who gave Team Hammer its 99th win on Saturday — rounded out the weekend by earning its 101st on Sunday.

Landers continued his crushing Twins Cup form all weekend long. He escaped to a pair of lopsided victories to up his victory streak aboard his Suzuki SV650 to six.

He said, “I just tried to get as good of a start as possible and open up a big gap on the first lap. I’m so stoked. I’ve got to give the biggest shout out to SportbikeTrackGear.com and to John Ulrich and Chris Ulrich with Roadracingworld.com. They’ve helped me out so much this year, and it’s an honor to work with them.”

The 2020 MotoAmerica season will resume for its penultimate round at Indianapolis Motor Speedway on October 9-11.