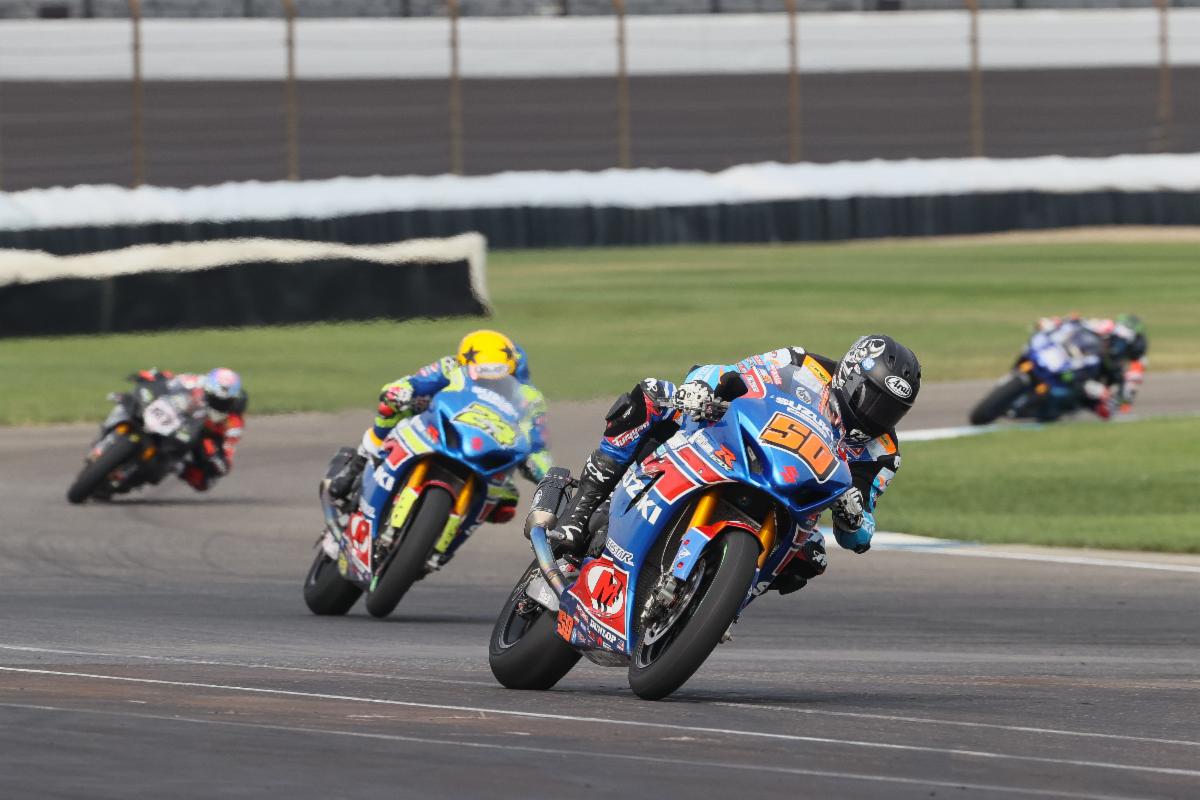 Starting from the outside of Row 1 with teammate Toni Elias holding pole position, Fong stormed into the lead at the start. After being displaced to second, Fong was all over the race leader when the first red flag flew while working the race’s third lap.

Elias took the holeshot the second time around, and the two M4 ECSTAR Suzuki pilots ran 1-2 in the early going. On lap 2, Fong dove past Elias to take the lead and was pulling clear at the front when the race’s second red flag was shown.

Following the second restart, Fong quickly worked his way up into second and pressured the early leader, who then crashed. Fong led until six laps remained in the 15-lap race before again being dropped back to second, but he immediately counter-attacked and forced the new leader into a critical mistake.

From there, Fong fended off a third challenger and won the drag race to the checkered flag by 0.228-second. Elias came home in fourth.

“It was hairy at the end with all the heat cycles on the tires,” Fong said. “With all the warm-up laps and everything, it felt like we did like 30 laps on those tires. But we managed and the bike ran great. I have a rock solid crew behind me. We’ll continue the hard work tomorrow and look to finish the weekend strong.”

Meanwhile, in Twins Cup competition, 15-year-old ace Rocco Landers officially took the torch from 2019 class champion and current Team Hammer Stock 1000 star Alex Dumas. After getting his season off to a bit of an uncertain start, Landers found his form on the SportbikeTrackGear.com Suzuki SV650 and promptly earned a series of blowout victories en route to locking up the championship a round early.

Saturday’s contest was more of the same. Landers pulled away from pole and powered to a nearly six-second margin of victory. The latest commanding victory was his seventh Twins Cup win in a row.

After the race, the newly crowned 2020 MotoAmerica Twins Cup Champion said, “SportbikeTrackGear.com and Team Hammer have put this amazing program behind me all year. After Road America and Atlanta, I didn’t think I was going to be up here. The results early in the year messed with my head a little bit, but I’m feeling so good now. I’ve been feeling so good most of the year. It’s been so awesome working with this whole team. They’ve worked so hard for me and given me such an amazing bike.”

French Canadian Dumas returned to action after breaking his left arm just above the elbow a month and a half ago at Ridge Motorsports Park. The M4 ECSTAR Suzuki pilot showed little signs of rust, battling his way forward in the Stock 1000 race on his Suzuki GSX-R1000 from seventh to take control of third by lap 3.

There he would remain until the race’s final several meters, as he was drafted on the long front straight and displaced to fourth at the checkered flag by a scant 0.043-second. Dumas later returned to the track at the end of the day to take eighth place in the MotoAmerica Superbike race on his Stock 1000 spec GSX-R1000.

Cam Petersen clinched the Stock 1000 title in that race, being credited with a close second in the process. Petersen, on his Altus Motorsports GSX-R1000 built by Team Hammer, stretched his points lead to 51 at The Brickyard. Petersen has won seven races and finished second three times in his magical season.

“It means so much to me. This is my life,” said Petersen. “Just being able to hold this number one plate is pretty special. It’s something I’ve dreamt of my whole life.

“It hasn’t been an easy fight,” he continued. “Every year I’ve been here (in America) I’ve been on a different team, different bike. It seems like every year kind of halfway through the season I start finding my feet. This year, I just decided to ride the Stock 1000 bike and see if I could find my feet again a little bit. I think I lost my way a little bit there a few years ago. This year has probably been the best thing for my career. I’ve had so much fun riding my bike every single weekend.”

MotoAmerica Supersport star Sean Dylan Kelly saw a potential win evaporate when he crashed from the lead while attempting to pull clear of the pack on lap 3. The Floridian blasted to the holeshot from pole aboard his M4 ECSTAR Suzuki and put his head down in hopes of keeping his championship hopes alive. Desperate for a win, Kelly pushed to the maximum but unfortunately paid the price for his calculated risk.

With ‘SDK’ out of commission, it was up to M4 ECSTAR Suzuki teammate Lucas Silva to uphold the team’s Supersport honors and he did. Silva charged up from an early seventh place and joined a heated battle for second position. Following an outside pass into third with three laps to go, Silva won a braking duel into Turn 1 on the race’s penultimate lap to take control of second.

Unfortunately, he was pushed wide by a rival’s aggressive last-lap passing attempt. That dropped Silva from second to fourth at the checkered flag, just 0.316-second short of a runner-up result. The result was Silva’s second best of a season in which he’s finished inside the top 10 in every race.