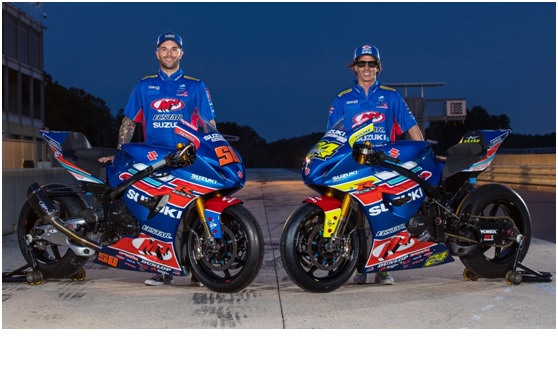 Spanish superstar Elias will be entering his fifth season racing in the MotoAmerica Superbike Series, and has already established himself as one of the series’ all-time greats. With the 2017 MotoAmerica Superbike Championship under his belt, followed by impressive runner-up finishes in 2018 and 2019, Elias is eager to keep performing at the same level, win races, and regain the championship in 2020.

Teammate Fong earned the promotion to Superbike duty with his breakout 2019 season, in which he locked up the Supersport crown a round early through an epic campaign that included winning six times and finishing second 14 times. The Californian further rounded out his game with improved consistency and race craft, and looks forward to the new challenge of racing the premier class aboard his Suzuki GSX-R1000, and with a crew that has helped him physically and mentally prepare for the heightened competition.

Kelly is fresh off a breakthrough first MotoAmerica season and is determined to again be a strong contender in Supersport. The 18-year-old racked up seven podium finishes in 2019, including a spectacular double victory at Pittsburgh International Race Complex.

Teammate and rising star Silva will compete alongside Kelly, building off his impressive season in 2019 with 10 top-10s and an 11th overall finish.

Two-time MotoAmerica National Champion Dumas will contest in the 2020 MotoAmerica Stock 1000 Championship on a Suzuki GSX-R1000. In 2019, Dumas became the MotoAmerica Twins Cup Champion with five wins out of 11 races, and proved he has what it takes to compete at a higher-level in hopes to stack up more podiums and another championship victory.

M4 ECSTAR Suzuki will debut its full team and race livery at the first round of the 2020 MotoAmerica Championship series on May 29th at Road America. The action-packed weekend will be airing live on FOX Sports and MAVTV, and streaming live on MotoAmerica Live+ both Saturday and Sunday of the races. Check your local listings for times.