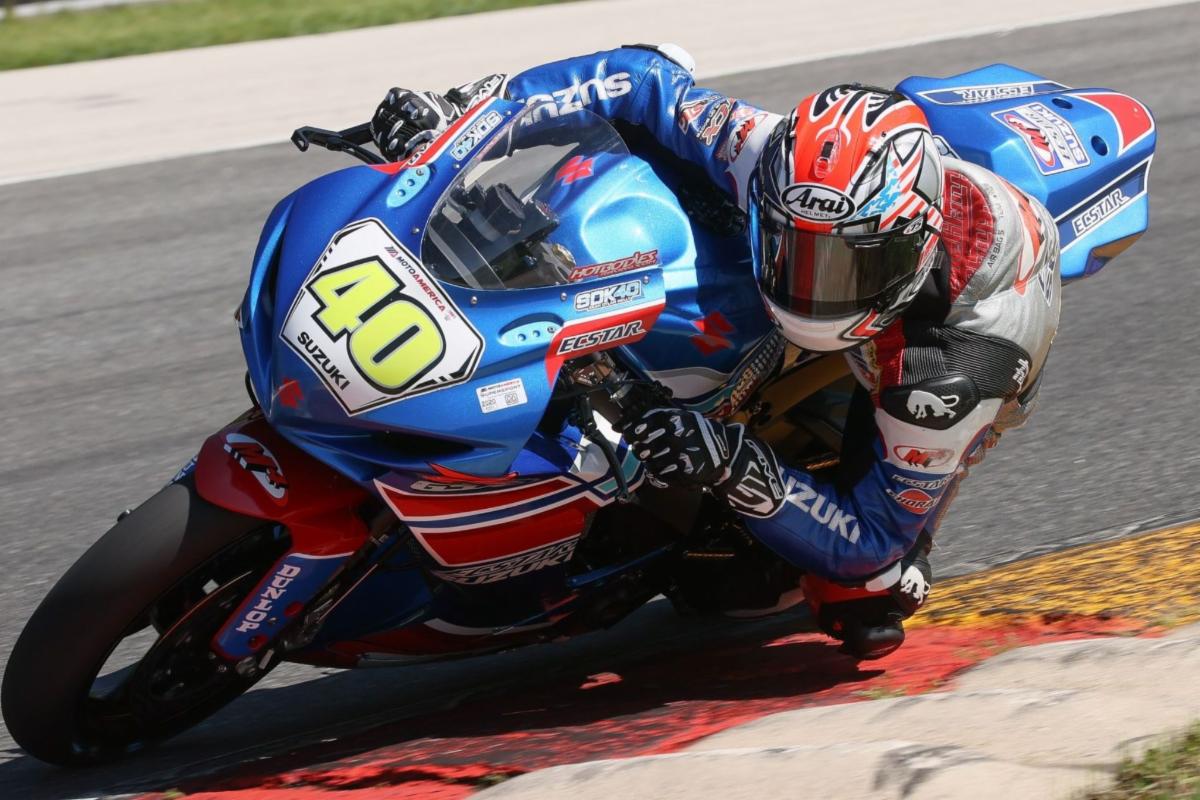 Kelly showed his grit and skill during Race 2 of the weekend. Although he suffered a crash while battling for the win in Saturday’s Supersport contest, the 18-year-old bounced back with an impressive third-place run in Sunday’s rematch. “SDK” took over the lead on the opening lap and waged a back and forth drafting contest before settling back to secure third. An opponent’s disqualification later moved Kelly up the leaderboard where he was ultimately awarded second place.

“It was a tough race after taking the hard hit yesterday,” said Kelly. “As much as we want to be on top, we just needed a decent result. I’m looking forward to starting next month at a better pace after learning a lot this weekend. I want to give a huge thanks to my entire M4 ECSTAR Suzuki team.” 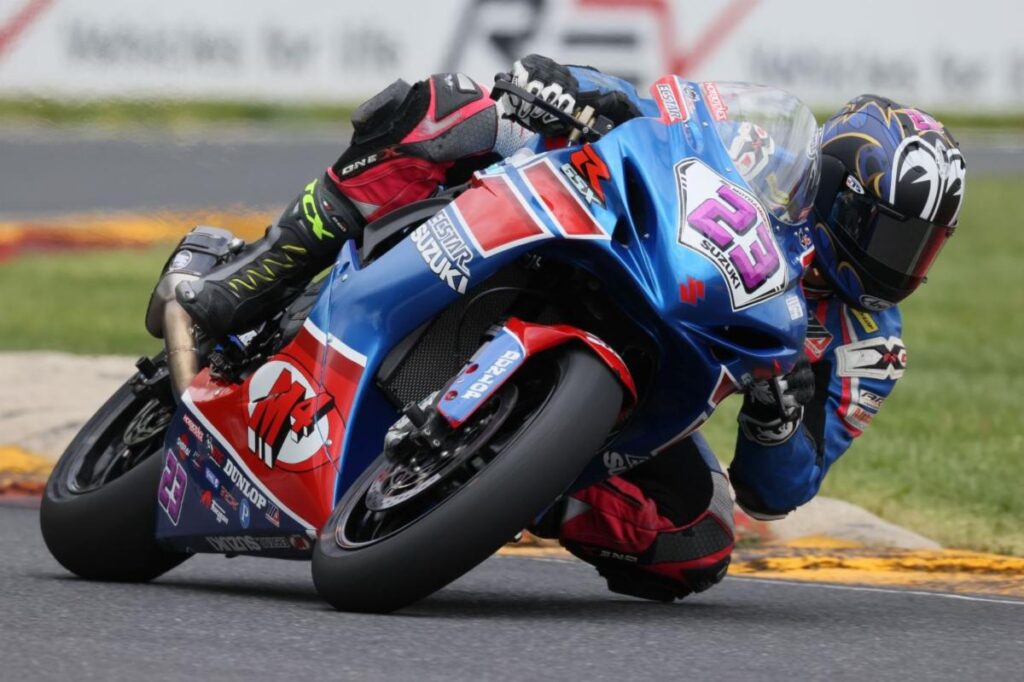 Supersport teammate Lucas Silva finished a strong fifth on Sunday after finishing a close eighth the day before.

Fong had an impressive race on Saturday in the premier HONOS Superbike class aboard his Suzuki GSX-R1000. After qualifying on the second row, Fong showed the pace to fight for the runner-up spot. On Saturday, he finished in a solid fourth after scrapping for second throughout. Unfortunately, he crashed from contention on lap 7 of 12 in Race 2 after colliding with another rider as they battled for second position.

“Saturday’s Race 1 was good, clean fun,” said Fong. “There was some good dicing and I learned a lot racing with those guys, especially considering how little time I’ve had on this bike. I felt I rode well and I did everything I could, giving 110% each corner. We were actually really good in a lot of the technical sectors, and we found some things this weekend that will help us really improve going forward.” 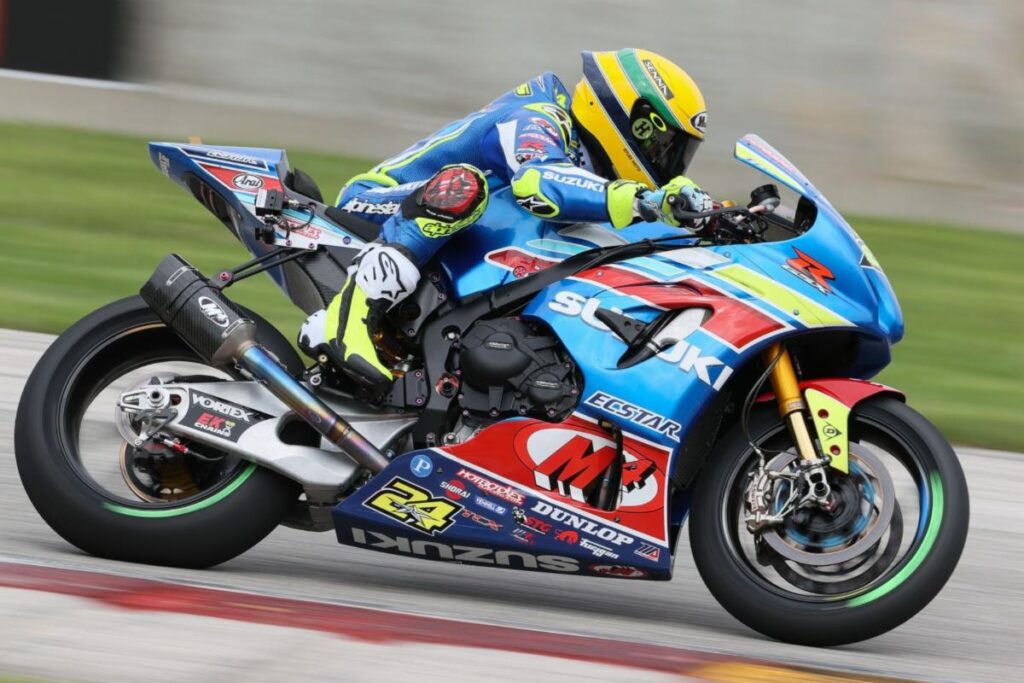 Toni Elias (#24) during Race 2 at the MotoAmerica season opener.

2017 MotoAmerica Superbike and Moto2 World Champion Elias suffered a rough weekend after qualifying on the front row. After retiring on Saturday due to a broken chain, Elias was determined to redeem himself on Sunday, displaying both improved confidence and pace, but crashed on lap three while running with the lead pack.

“We did an incredible job,” said Elias. “I’ve never done this much improvement in my life. Not the best start to the season, and not the start I wanted or expected, but racing is like this. We will continue forward. We have one month now, and we will work hard.” 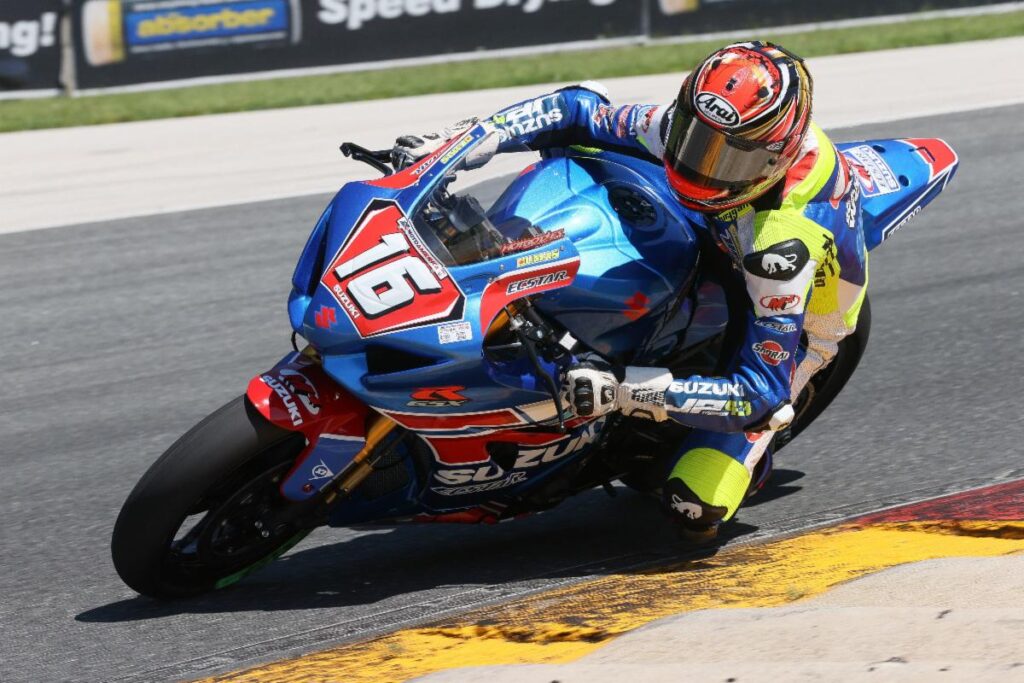 Double MotoAmerica undercard national Champion Alex Dumas enjoyed a solid debut in the literbike competition after previously making his name on smaller displacement motorcycles. The French Canadian qualified and finished seventh in the Stock 1000 opener aboard his Suzuki GSX-R1000.

The M4 ECSTAR Suzuki team is looking forward to when the MotoAmerica series returns to Road America for Round 2 on June 26-28.