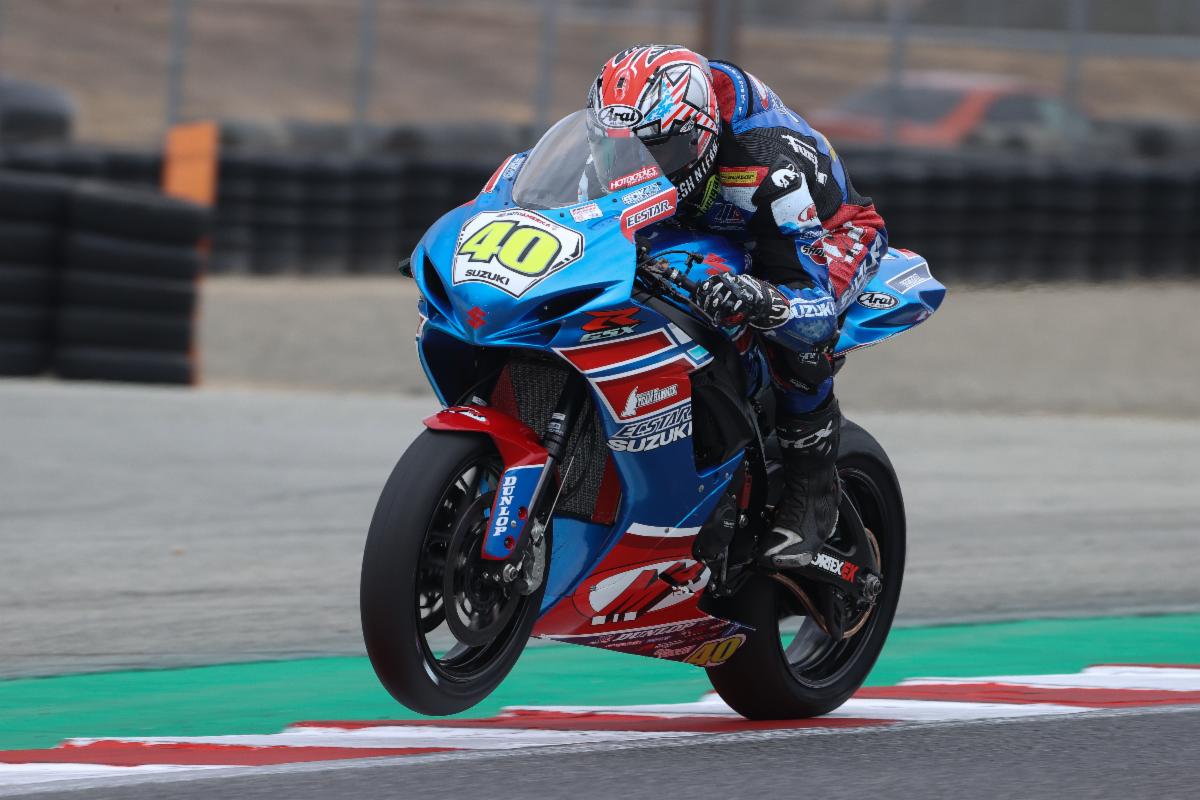 Brea, CA (October 26, 2020) –Suzuki Motor of America, Inc., and Team Hammer closed out a memorable 2020 MotoAmerica AMA/FIM North American Road Racing season in just about the most epic way imaginable at Laguna Seca, scoring wins and podiums up and down the order.
The weekend served as the farewell performance for 2017 MotoAmerica Superbike champion Toni Elias with M4 ECSTAR Suzuki, and the Spaniard delivered. After entering the three-race finale with just a single podium under his belt this season, Elias reminded the paddock of his immense talent and drive, notching up a pair of runner-up finishes and a third-place on the weekend.

Elias saved his best for last, slicing his way up through the top five aboard his Suzuki GSX-R1000 to arrive in second in 2020’s final race. That result elevated him to fourth in the final MotoAmerica Superbike standings by a single point.

Afterward, he said, “I’m really happy to finish the season like this. Thank you so much to my M4 ECSTAR Suzuki team to work hard all the way up to the end. Today they gave me the best bike and the best feeling of the entire year. I was able to overtake easily the riders in front of me and once I got into second I was able to make a gap. For us, this is like a victory. I’m very happy. Right now my future is like a question mark. If this is my last ride, I had a blast. I’m happy I was able to give a little present to my team and Suzuki.” 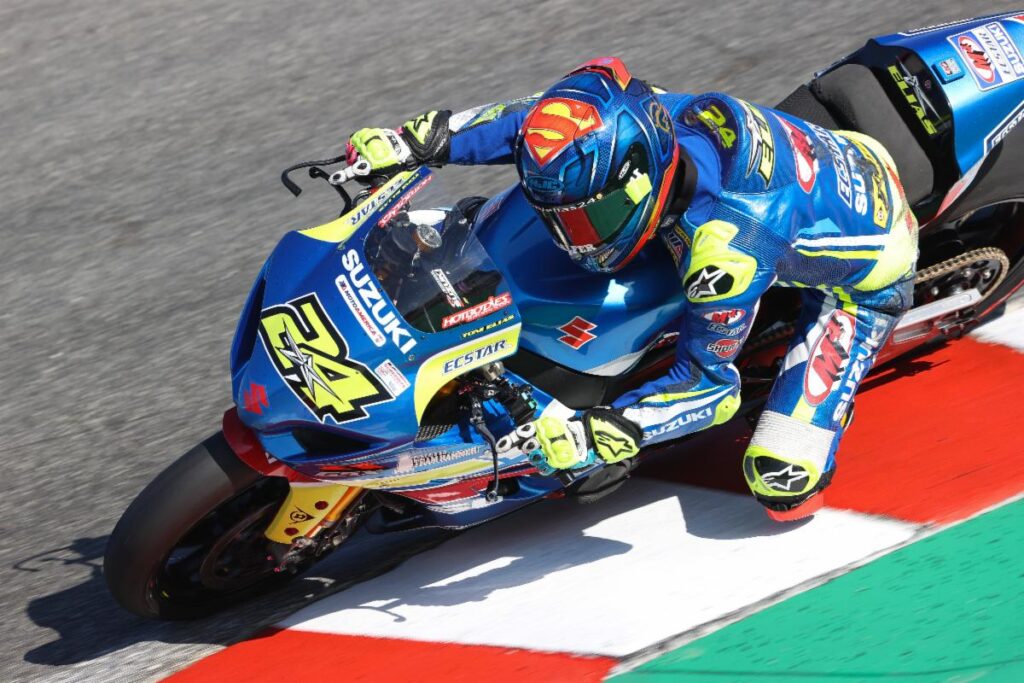 Toni Elias (24) earned three podium finishes in his farewell performance on his Suzuki GSX-R1000. Photo by Brian J Nelson.
Elias’ final pass for position was on his M4 ECSTAR Suzuki teammate, Bobby Fong, who ended his breakthrough Superbike season with a fourth. The weekend didn’t live up to the Californian’s expectations or potential, as he crashed from second on Friday and struggled to tenth in mixed wet and dry conditions in Sunday morning’s Race 2.

Still, Fong ended his outstanding premier-class campaign ranked third in the championship on the strength of three victories and eight podiums. The Californian backed up his championship season earned last year in Supersport by proving he is also a contender on a Superbike. 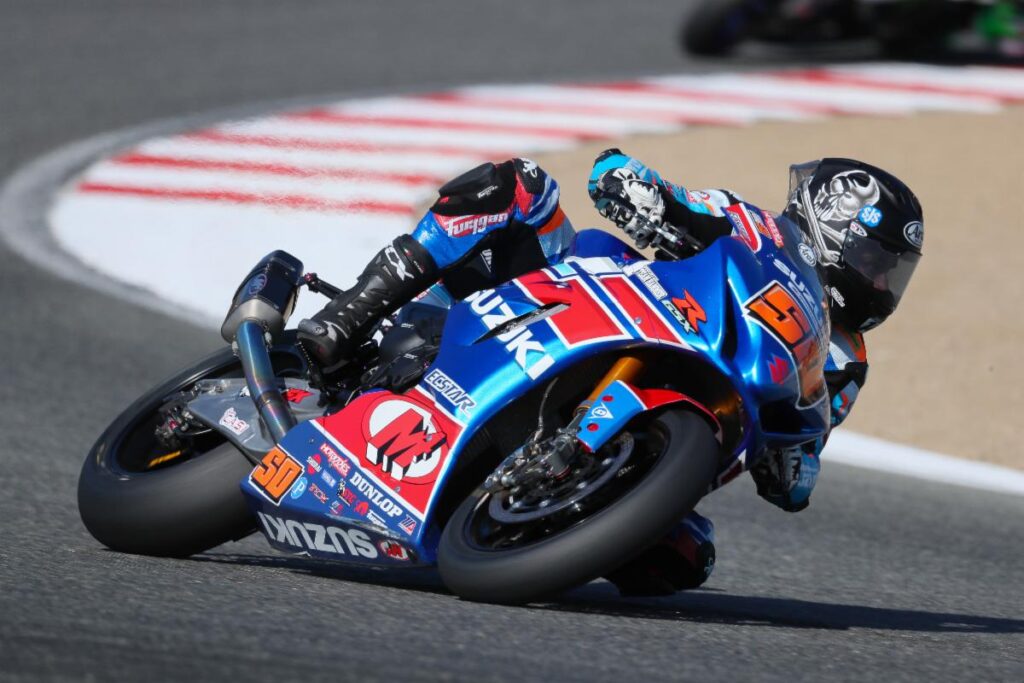 Bobby Fong (50) finished in 3rd in the Superbike Championship. Photo by Brian J. Nelson.
Meanwhile, Sean Dylan Kelly came up huge in the MotoAmerica Supersport finale. “SDK” escaped to a breakaway victory on Saturday and then won what was likely the race of the year on Sunday courtesy of a final-corner block pass and subsequent sprint to the checkered flag to beat the reigning class champion by 0.073 seconds.

The Floridian’s Laguna Seca double upped his win tally to five for the season to go along with 15 top twos and 16 podiums in all.

The Supersport championship runner-up said, “I wanted to finish off the last race of the season on the best note possible, and getting the double is the way to do that!

“I want to dedicate this race to the entire M4 ECSTAR Suzuki team. The last two years together have been amazing and helped prepare for the future. I’m just really proud of the work we’ve done all season long. We had some tough times, starting the year with a broken leg. But we came back and showed even an injury like that won’t stop us. It was an amazing season — quite a few wins, lots of podiums, and second in the championship. We have a lot to be proud of.” 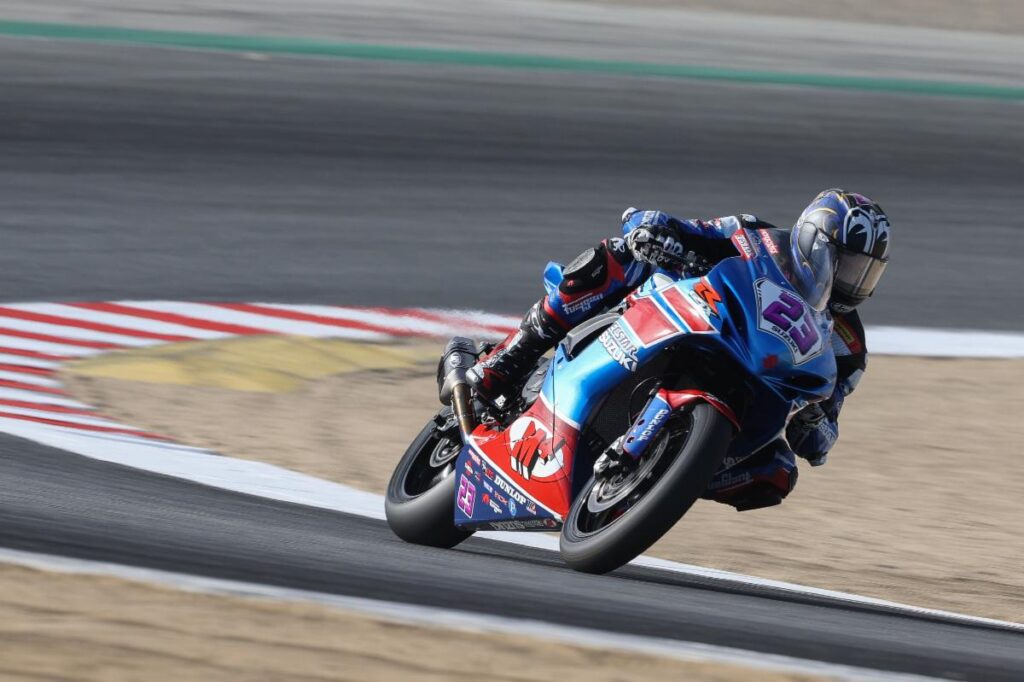 Lucas Silva (23) used his season-long consistency to earn fifth place in the Supersport Championship. Photo by Brian J Nelson.
Kelly’s Supersport teammate, Lucas Silva joined him inside the championship top five. The native Brazilian earned his fifth-place Supersport ranking due to his remarkable season-long consistency. He finished sixth on Saturday and then ended the season in 13th — his only result outside the top ten the entire year. 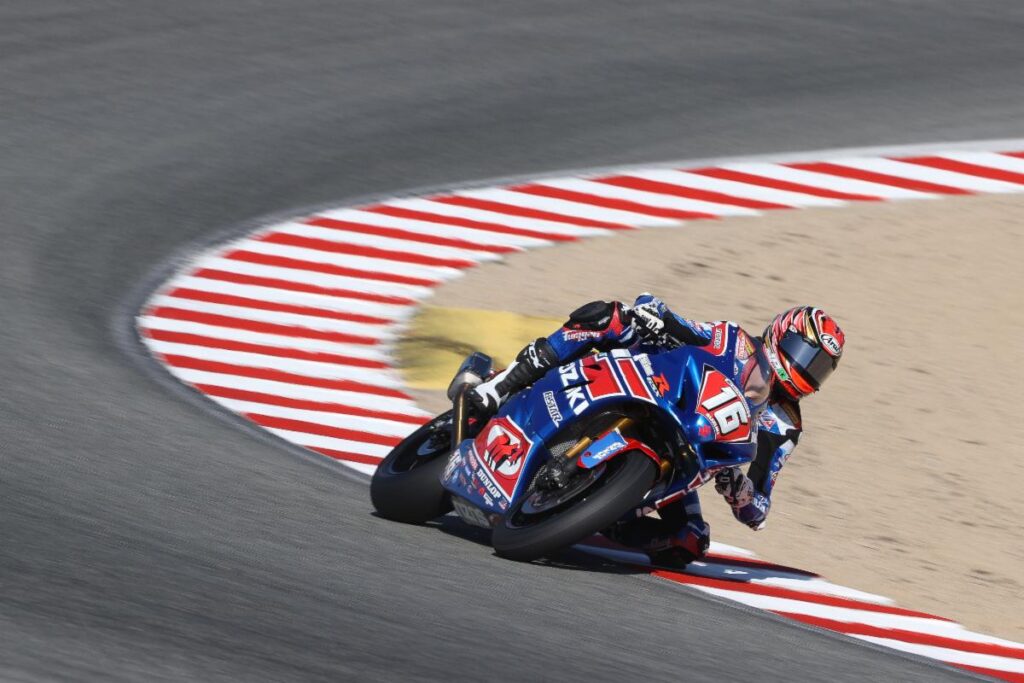 Alex Dumas (16) scored a close fourth on his GSX-R1000 in his final race of the season. Photo by Brian J Nelson.
M4 ECSTAR Suzuki’s Alex Dumas again demonstrated that he’s fast returning to full strength after suffering a midseason injury. The young French Canadian was Petersen’s stiffest competitor in the Stock 1000 class at one point in the season aboard his similarly outfitted GSX-R1000. Dumas scored a close fourth in the finale, hinting that he’ll be back in the hunt for race wins and championship victories in 2021.