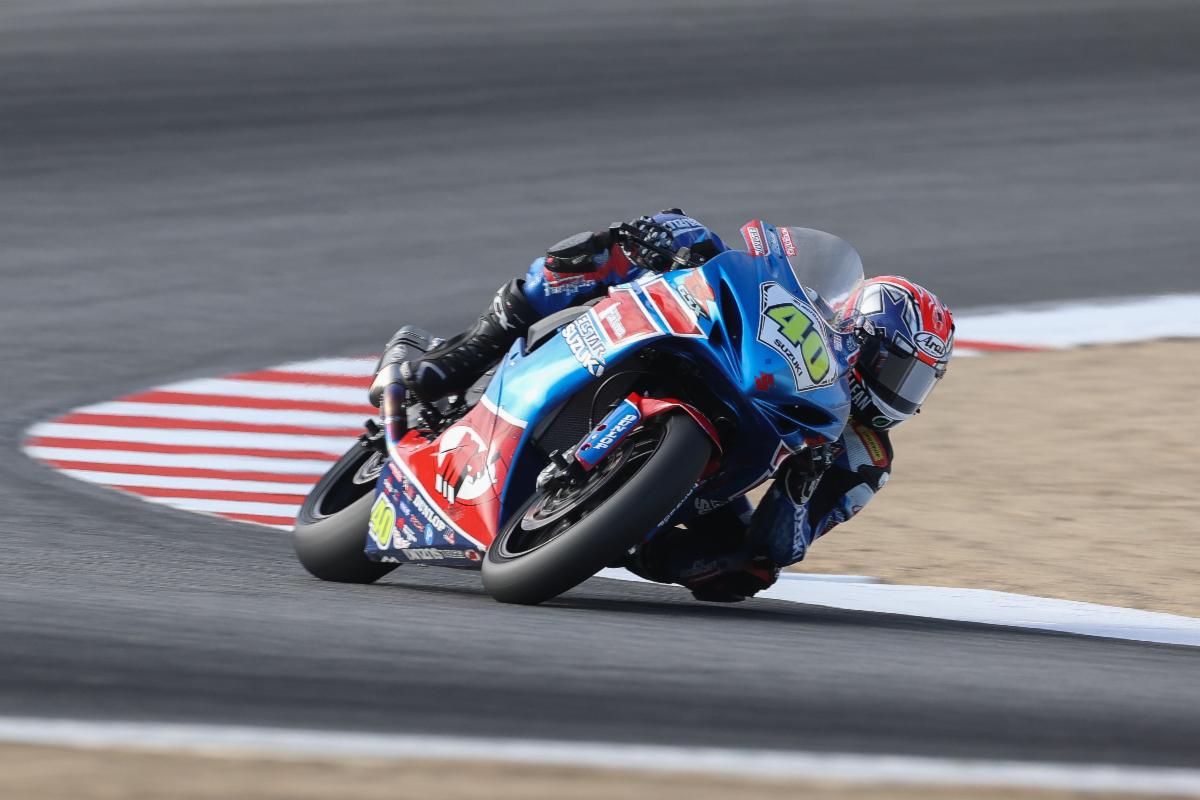 M4 ECSTAR Suzuki’s Sean Dylan Kelly (SDK) stole the show on Saturday despite being pitted against the current Supersport champion along with a returning, multi-time Supersport king.

SDK diced back and forth with his decorated rivals on the opening laps aboard his agile GSX-R600. He forced a mistake from one of them after making a pass for second on lap five and then threatening to leave his rival in his wake via his superior pace.

He then ate up the gap to his other primary rival and made a move into the lead on lap nine of 19. Once again, he pushed his opponent past the breaking point and escaped to build a mammoth, 15.792-second margin of victory.

“I’m super happy to get this win,” Kelly said after scoring his fourth win and 14th podium of the year. “Honestly, I came into this final weekend of the season saying I wasn’t going to leave here without at least one win and hopefully two. I’m really happy knowing I have a chance to make it a double.

“It was a fun race. It was a good scrap at the beginning with the three of us there fighting. The leader had a bit of a gap on me, but I knew I was strong enough and fast enough to catch up and that’s exactly what I did. I’m really happy to be here. I have to give a big thank you to everyone with the M4 ECSTAR Suzuki squad. We’ll be back out there fighting again tomorrow.”

Kelly’s Supersport teammate Lucas Silva added to his season-long streak of top-10s by finishing in sixth.

Meanwhile, in the premier Superbike class, 2017 MotoAmerica Superbike Champion Toni Elias guaranteed himself a proper send off in his final weekend with Team Hammer and Suzuki Motor of America, Inc. After his M4 ECSTAR Suzuki teammate Bobby Fong crashed out of second place while powering away from the rider he had passed to take the position, it was up to Elias—who had been in fourth before Fong fell–to uphold the team’s fortunes.

Elias did better than that, reeling in the new second-place rider from a considerable distance back and reclaiming the position for the team with just three laps remaining.

The runner-up finish was Elias’ second podium result of the season. Afterward, he said, “We made a big step forward from yesterday. I’m happy — it’s a podium and we haven’t gotten too many this year. I’m very happy for myself and my team and family. These are our last races together and everyone is working so hard. It’s great. Of course I want more — I want to win — but we’ll make some changes tonight and work hard tomorrow.”

Rising stars Alex Dumas and Rocco Landers performed well on the day, too. Landers qualified second aboard the SportbikeTrackGear.com Suzuki SV650 for Sunday’s Twins Cup finale. Landers, who has already locked up the title, will now look to convert the front-row starting position into his eighth consecutive victory to close out the 2020 MotoAmerica season on a high note.

Meanwhile, Dumas challenged for a podium aboard his M4 ECSTAR Suzuki GSX-R1000 in the season’s Stock 1000 finale before finishing a close fourth. Also in that race, Altus Motorsports’ Cam Petersen won his eighth race of the year on his Team Hammer-built Suzuki GSX-R1000. “This is everything,” said class champion Petersen. “I have been working towards this my whole life. To win again, is such a great feeling. It’s been a great season.”