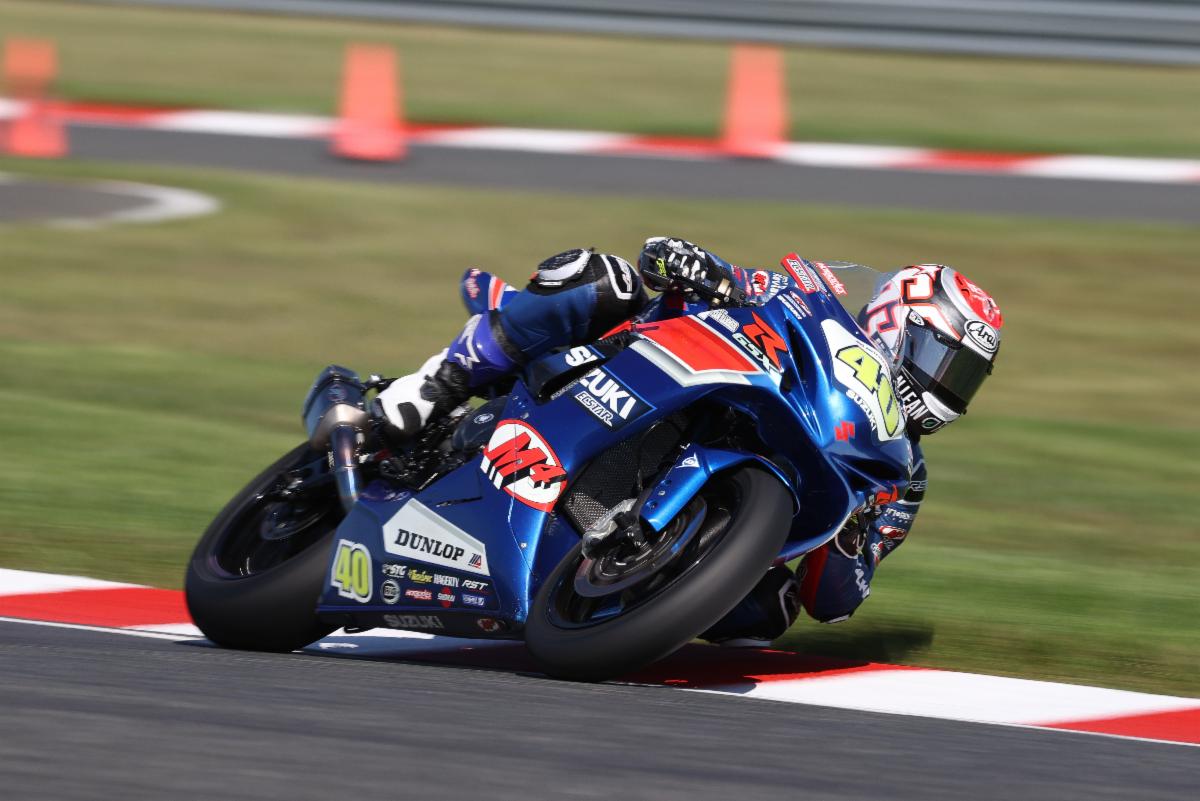 Team Hammer enjoyed a sensational Saturday of the penultimate round of the 2021 MotoAmerica AMA/FIM North American Road Racing Championship at New Jersey Motorsports Park.
M4 ECSTAR Suzuki’s Sean Dylan Kelly showed his ability to keep the pressure on his opponents once again in the MotoAmerica Supersport contest, pulling off yet another final-lap victory in jaw-dropping fashion.
The series points leader was forced to work very hard yet again, dicing it up with teammate Sam Lochoff over the first half of the contest before settling into a one-on-one duel with the defending class champ in the race’s decisive laps.
The final of five lead changes that took place over the race’s last-lap-and-a-half came courtesy of ‘SDK’ leveraging the extreme agility of his GSX-R600 to unexpectedly slot into first position in the middle of the chicane.
That maneuver set up a drag race to the checkered flag that was only decided once officials reviewed the start/finish line camera. Kelly was officially credited with a 0.001-second margin of victory.
The win was his 11th of the season and improved SDK’s chance to lock down the title early. Kelly needs a finish of just seventh or better on Sunday to clinch the title even if his closest challenger were to win out in the remaining races.
“Clearly, I was willing to risk quite a bit,” Kelly said. “I went out there to win. Everyone’s talking about my chances to win the championship, and how I possibly didn’t even have to win to clinch this weekend. That doesn’t matter. I come here because I work hard to win, so I’m going to do that every single weekend. We’ve been doing that all season long, so why not keep doing it?
“This is amazing. I’m really happy, but we still have tomorrow, and that’s going to be an important day for us.”
Lochoff registered arguably his most impressive ride yet in middleweight competition. The South African secured provisional pole on Friday and proved his competitiveness by leading multiple laps while pushing the class’ established powers before settling into a secure third.
The result was the fourth podium of the rookie’s maiden Supersport campaign. He said, “Riding with the fastest guys, I was learning every lap. I made a couple mistakes, especially on the long left. But we’re going to go back and make a couple changes for tomorrow. Leading some laps, it felt like a win. But I think if we make the right changes, maybe we can be even more competitive tomorrow.”
Meanwhile, Altus Motorsports Suzuki’s Jake Lewis already completed his ultimate goal for the 2021 season by claiming the Stock 1000 crown a race early.
Lewis put the finishing touches on his championship with a dramatic victory, executing a final-lap pass aboard his Team Hammer-built GSX-R1000R to claim the championship in ideal fashion.
“I wanted to go out and get the championship from the top step to reward my team and that’s what we did,” Lewis said. “Last year, I was out of the paddock, sitting on the couch, over 200 pounds, and in a tough spot. I thought about quitting racing, but I’ve been traveling the country in a van with my mom and dad since I was four years old, chasing a dream. I worked hard to get back in shape. After I got my butt kicked at the first round, I knew it was time to get going, and we’ve been on the podium pretty much ever since.
“Big thanks to Altus Motorsports for the opportunity and to Team Hammer as well for the amazing technical package.”
M4 ECSTAR Suzuki’s Superbike teammates, Bobby Fong and Cameron Petersen, put up a strong fight as well on Saturday. Fong battled it out for a podium throughout aboard his Suzuki GSX-R1000R, coming up 0.132 seconds short of the box in fourth. Petersen, meanwhile, engaged in a three-way scrap for fifth before ultimately finishing in seventh.
Wyatt Farris added another top-ten finish to the team’s tally by finishing tenth aboard his M4 ECSTAR Suzuki GSX-R1000R in the Stock 1000 contest.
Sunday will be another big day at the track for Team Hammer at NJMP with Kelly and Lochoff going for victory in Supersport and the premier Superbike class racing not once, but twice.
About Team Hammer
The 2021 season marks Team Hammer’s 41st consecutive year of operating as a professional road racing team. Racebikes built and fielded by Team Hammer have won 124 AMA Pro and MotoAmerica National races, have finished on AMA Pro and MotoAmerica National podiums 325 times and have won ten AMA Pro and MotoAmerica National Championships, as well as two FIM South American Championships (in Superbike and Supersport.) The team has also won 137 endurance races overall (including seven 24-hour races) and 13 Overall WERA National Endurance Championships with Suzuki motorcycles, and holds the U.S. record for mileage covered in a 24-hour race. The team also competed in the televised 1990s Formula USA National Championship, famously running “Methanol Monster” GSX-R1100 Superbikes fueled by methanol, and won four F-USA Championships.