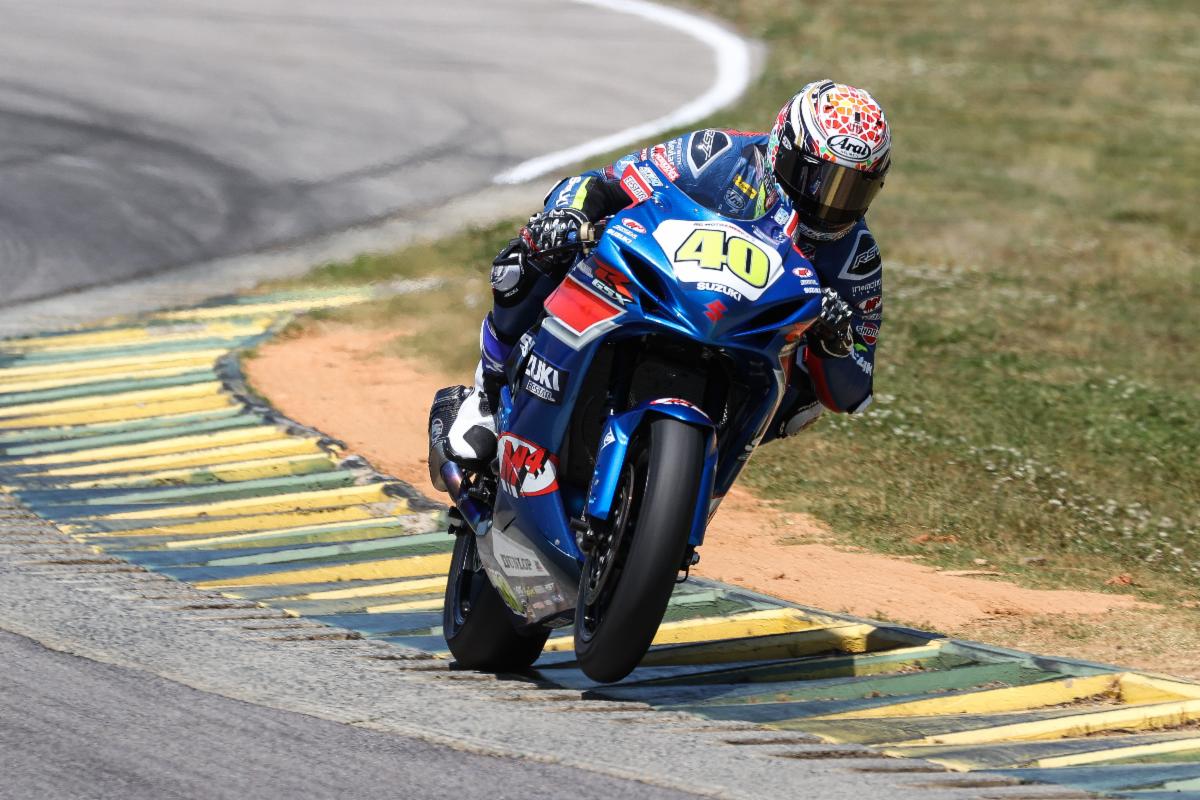 Despite suffering from illness and a resultant hit to his fitness between rounds, M4 ECSTAR Suzuki ace Kelly continued to build and carry his momentum in the MotoAmerica Supersport class. ‘SDK’ kept his early 2021 record unblemished, upping his pole record to two-for-two and his wins mark to three-for-three on Saturday at VIR.

Kelly took the holeshot aboard his GSX-R600 only to see a rival dive up the inside just a few corners into the race. The Floridian immediately retaliated to reclaim the position and defended it resolutely from that point forward.

Despite a tight lead pack comprising four to six riders, Kelly never gave the opposition an opportunity to stick a wheel underneath him. With four laps to go, SDK upped his pace and subsequently opened up enough of a gap to seal his hard-earned victory.

Kelly now boasts a five-race win streak dating back to the end of the 2020 season. He said, “It feels amazing to be in the P1 spot. Thank you so much to my team, M4 ECSTAR Suzuki and all my guys. We’ve been working so hard since the end of the 2020 season. Already two poles and three wins this season. “I got sick between Atlanta and here, and it doesn’t help not training and not being my 100%. But it’s all good — no excuses and we’re pushing hard. We’ll keep on working and do our homework; I think we have a good chance of coming back stronger and faster tomorrow.”

Kelly’s M4 ECSTAR Suzuki teammate, Sam Lochoff, was one of those aforementioned riders also battling in the lead group of the MotoAmerica Supersport contest. The South African erased a gap to the front and joined the fight for the lead a handful of laps into the 19-lap affair.

His race took a turn for the worse when he ran off track on lap 14, dropping to near the bottom of the top ten in the process. Undeterred, Lochoff fought his way back up to eighth and came up just 0.381-second short of chasing down sixth at the checkered flag.

M4 ECSTAR Suzuki’s Superbike duo of Bobby Fong and Cam Petersen both showed podium potential aboard their GSX-R1000s on Saturday and will be motivated to make good on that undeniable speed come Sunday’s rematch.

Fong was well clear in third and looking for a way into second when a electronics issue sent him off the track surface and plummeting down the field. Despite the problem, the Californian soldiered on to log 12th-place points in the end.

South African Petersen, meanwhile, waged a back and forth dogfight for third right to the checkered flag. Petersen powered from fourth to third at the stripe on several occasions as the laps counted down. However, any last-lap assault plan he’d formulated was foiled when a third rider dropped him to fifth with two laps remaining. Petersen ultimately finished in fifth, less than a second off the podium and a scant 0.006-second out of fourth.

Team Hammer will be looking for more tomorrow as the VIR MotoAmerica weekend concludes on Sunday.