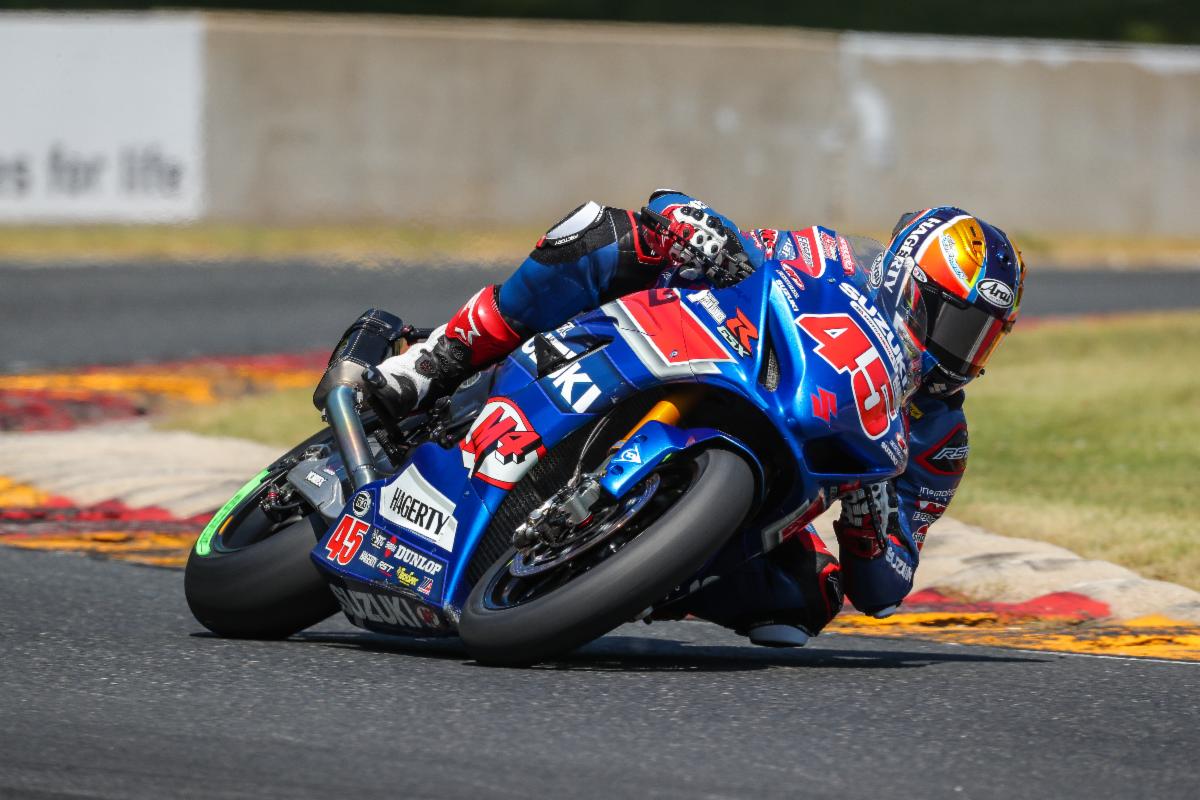 Adding a dash of added flair to those podiums was the fact that they were delivered in breakthrough fashion by South Africans Cameron Petersen and Sam Lochoff, who earned their maiden podiums in MotoAmerica Superbike and MotoAmerica Supersport, respectively.

Who would score the 300th podium was in doubt right up to the checkered flag as it was actually Petersen’s M4 ECSTAR Suzuki teammate, Bobby Fong, who spent the bulk of the race slotted in second position.

On Lap 5, Petersen joined Fong and the two flew their twin GSX-R1000 Superbikes in tight formation along the fabled circuit from that point forward. With just over a lap remaining, they were joined by a third rider, who ultimately hit the stripe ahead of them by mere fractions of a second as the three-rider pack powered past the line.

Petersen came home third, just 0.04 seconds back of second, while Fong took fourth, another 0.03 seconds back.

“I’m so stoked, but at the same time, I’m a little bit disappointed,” Petersen said. “We’ve had such good pace all weekend. It feels so good. I’m so happy to get my first Superbike podium — hopefully the first of many to come.

“Massive shout out to the whole M4 ECSTAR Suzuki team. I can’t thank everybody in my corner enough. We finally did it… We finally got that Superbike podium! Let’s just keep the ball rolling.”

The day’s Supersport contest was even more dramatic, both generally and for M4 ECSTAR Suzuki specifically.

Series points leader and pole winner Sean Dylan Kelly became embroiled in an intense two-rider dogfight for the win that saw nearly three dozen lead changes executed. However, ‘SDK’ hit a bump and lost the front while attempting a last-lap overtaking maneuver in Turn 5, as he and his rival both crashed out of contention for the win.

That opened the door for Lochoff, who had systematically worked his way into the mix after running a distant seventh in the race’s early going.

After steadily clawing his way forward, Lochoff finally joined what became a three-rider battle for third with two laps remaining. That instantly became a final-lap fight for the win after the leaders crashed in Turn 5, and rookie Lochoff capitalized with a sensational runner-up result, 0.803 seconds off of victory.

Lochoff said, “This whole team is great. I want to thank everyone on M4 ECSTAR Suzuki — they’re the best.”

Meanwhile, Kelly managed to quickly remount and reenter the fray, minimizing the damage and retaining his points lead by salvaging sixth place in the end.

“That was honestly one of the best races I’ve ever had,” Kelly said. “We fought from the first lap until the last lap. It’s pretty disappointing inside to have both of us finish on the floor. On the bright side, we’re both okay, and we both finished and got some points.

Team Hammer will look to take another step forward on Sunday at Road America with multiple wins and podiums within its grasp.