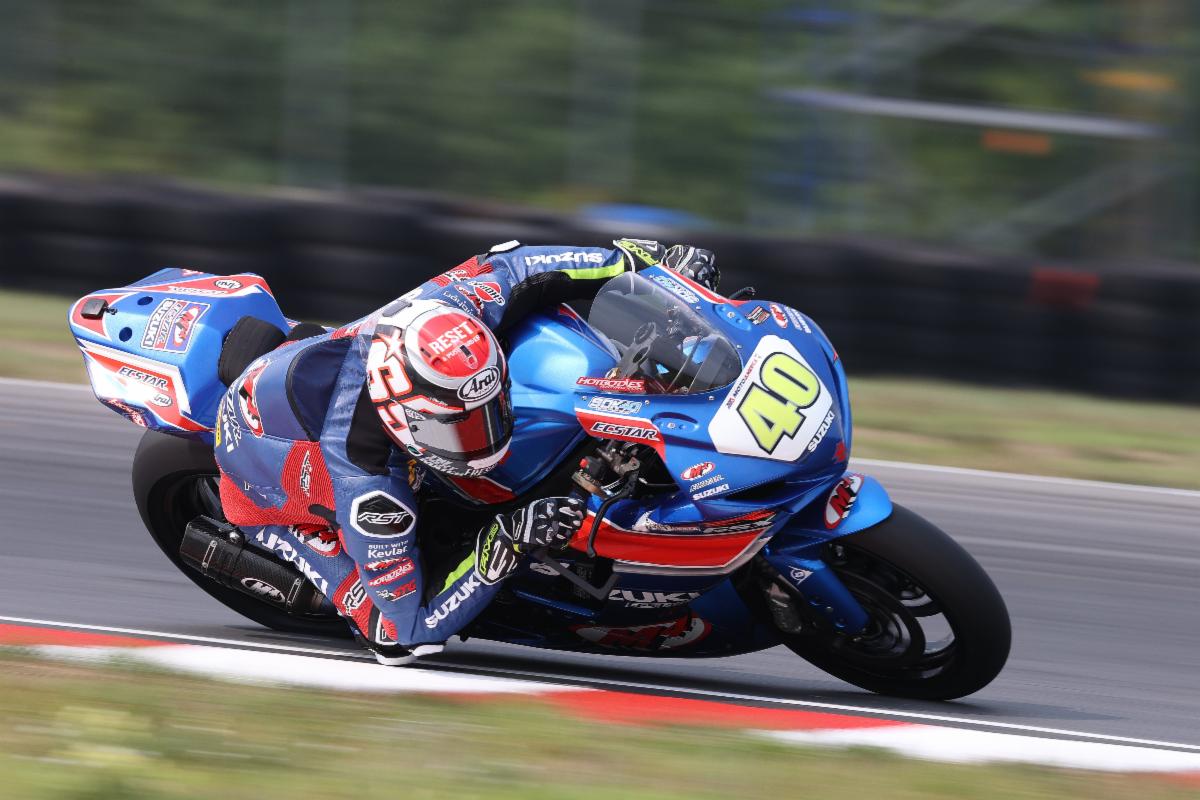 The headliner again was M4 ECSTAR Suzuki’s Sean Dylan Kelly, who extended his MotoAmerica Supersport win streak to five in another nail-biter.

Yet again, ‘SDK’ demonstrated his unique ability to keep his opponents corralled close behind him, immediately countered any passing attempts, and kept his nerves all the while by scoring an eighth win of the ‘21 MotoAmerica AMA/FIM North American Road Racing Championship season by a scant 0.075-second margin.

Kelly managed this despite lacking some of the speed he previously showed aboard his GSX-R600 in the run-up to the race, leaving him hopeful for an even more convincing showing in Race 2.

“Overall, it was good,” he said. “We led the entire time, and I tried to be as consistent as I could. It was a tough race. Honestly, I was expecting more. We’re going to have to do some studying tonight because our pace has been better than this all weekend. I had a few moments and didn’t have the sensation I was expecting. So, I’m expecting more — we’re going to do our homework and come back stronger tomorrow.

“We’re doing the right things. We just need to keep making steps. Thanks to my whole M4 ECSTAR Suzuki team and all my guys for working so hard and always believing in me.”

Kelly was joined on the podium by his rookie teammate, Sam Lochoff. The South African dropped back as far as sixth and once ran off the track in the wake of incidents involving other riders, but still managed to charge his way to a clear third.

The result was the second podium of Lochoff’s young MotoAmerica Supersport career.

Lochoff said, “My pace wasn’t great, but I was really consistent. I ran off in the Carousel because I thought there was oil on the right side of my tire after a couple guys went down.” Lochoff recovered without any damage and saw his fortunes rise throughout the race.

M4 ECSTAR Suzuki’s premier-class duo of Bobby Fong and Cameron Petersen were major players in the day’s MotoAmerica Superbike contest as well. Petersen stormed to the holeshot aboard his GSX-R1000R and battled for a podium before ultimately finishing fourth.

Californian Fong was even better on the day, matching his best result of the 2021 season taken way back in the opener by pushing the leader with his pace early while powering his way to a hard-earned runner-up result.

Fong said, “It’s great to be back up here — I’m so ecstatic. My crew has been working hard all weekend. They’ve been working hard all year. We’ve been having a little bit of a bad luck streak, so it’s nice to get a good result. I have to figure out a few things on the track, but I already have a pretty good pace. Hopefully, we improve it overnight and go one better tomorrow.”

In Stock 1000 action, Jake Lewis ran away with the win on his Team Hammer-built Altus Motorsports Suzuki GSX-R1000R, taking the title lead in the process. The cherry on top was the impressive performance of M4 ECSTAR Suzuki’s Wyatt Farris, who earned his best finish of the season by coming home in seventh position.

Team Hammer will be gunning for more glory in Sunday’s Superbike and Supersport contests.