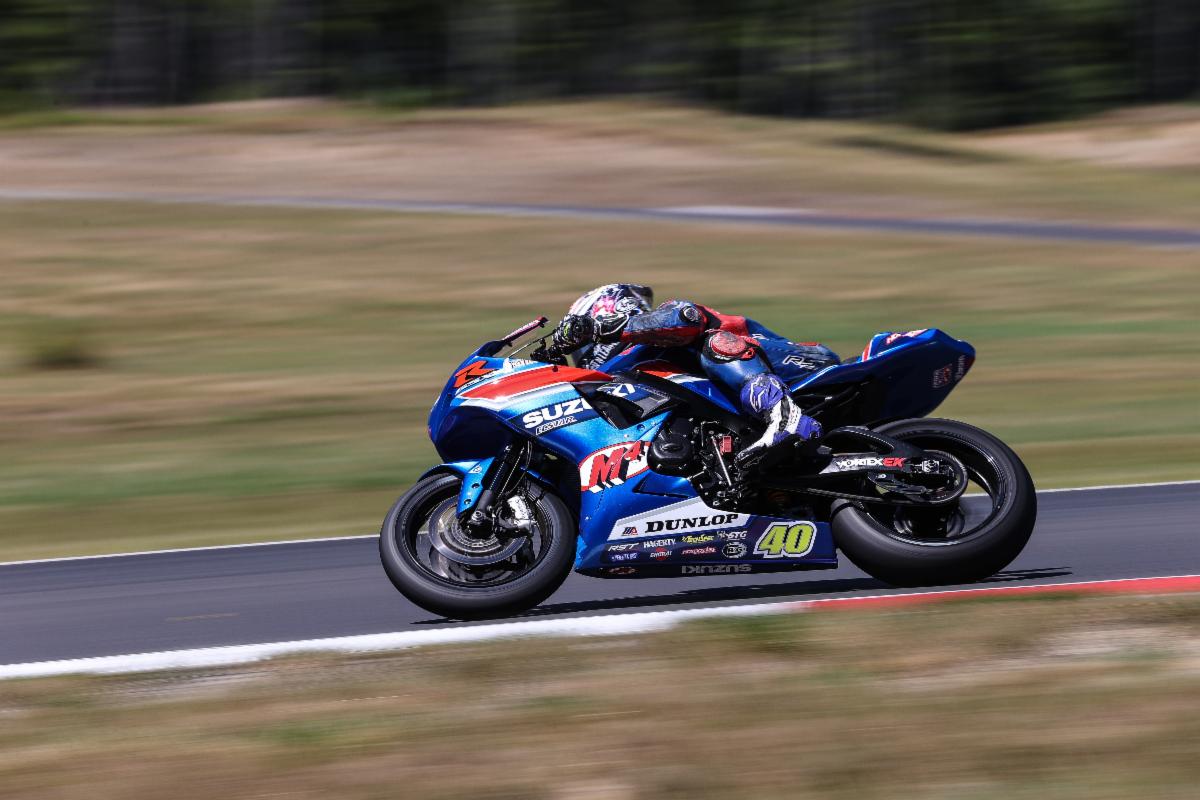 ‘SDK’ jumped out to the early advantage on his Suzuki GSX-R600 from pole only to be tracked down at mid-distance by his chief rival. Kelly was overtaken momentarily, but immediately countered with a slick inside pass in the ultra-tight left at the top of the hill. A follow-up assault was ultimately dismantled by SDK, who put his head down and eked out the decisive gap at the race’s conclusion.

Kelly’s second consecutive Ridge Motorsports triumph extended his championship advantage to 16 points. He said, “What a tough race — mentally and physically. It feels like it’s 200 degrees out here, but this is what I train for. It was such a difficult race keeping the pace, but I did. I kept the pressure on, I knew what I could do, and I was comfortable at the front.

“I’m really happy with the whole M4 ECSTAR Suzuki team and the work we are doing. Thank you to my guys.”

Kelly’s Supersport teammate, Sam Lochoff, registered yet another impressive ride in his rookie season in the middleweight class. Lochoff chased after Altus Motorsports Suzuki’s Kevin Olmedo for the bulk of the contest as the two chased after the final spot on the podium.

That honor ultimately went to Olmedo as he, SDK, and Lochoff combined to put three Team Hammer-built Suzuki GSX-R600s in the race’s top four.

Meanwhile, M4 ECSTAR Suzuki’s Cam Petersen continued his ascension to MotoAmerica Superbike stardom. After securing his first- and then second-career premier-class podium at the previous round at Road America, the South African upped his podium streak to three on Saturday.

Petersen, who qualified on the front row aboard his GSX-R1000 Superbike, went from second to third to fourth to second in a chaotic opening lap. He then settled into third, where he would remain to the checkered flag.

“I wanted to be patient today and I think maybe I was a little too patient,” said Petersen. “I felt like I was holding the guys up the first two laps. Once someone came by, my plan was to just sit behind him and see where he was strong and where I was losing. He kept gapping me, but I found my rhythm and got used to the tires and started closing the gap back down, but I made a little mistake going into the chicane with about five or six laps to go and that was the end of my race for second. We settled down and brought it home in third for the boys. Once again, I can’t thank my crew enough. Honestly, I feel it’s the best crew in the paddock, and I’m so blessed to have them. Thanks to the whole M4 ECSTAR Suzuki team.”

His teammate Bobby Fong salvaged some crucial championship points despite being hampered due to a heavy crash suffered during Thursday’s test. After pushing for a top-five position in the opening stages of the race, the Californian lost feeling in his hand due to lingering issues from the crash. Fong persevered to make it to the finish line in eighth.

Team Hammer will be back gunning for more wins and podiums in Sunday’s rematches at Ridge Motorsports Park.