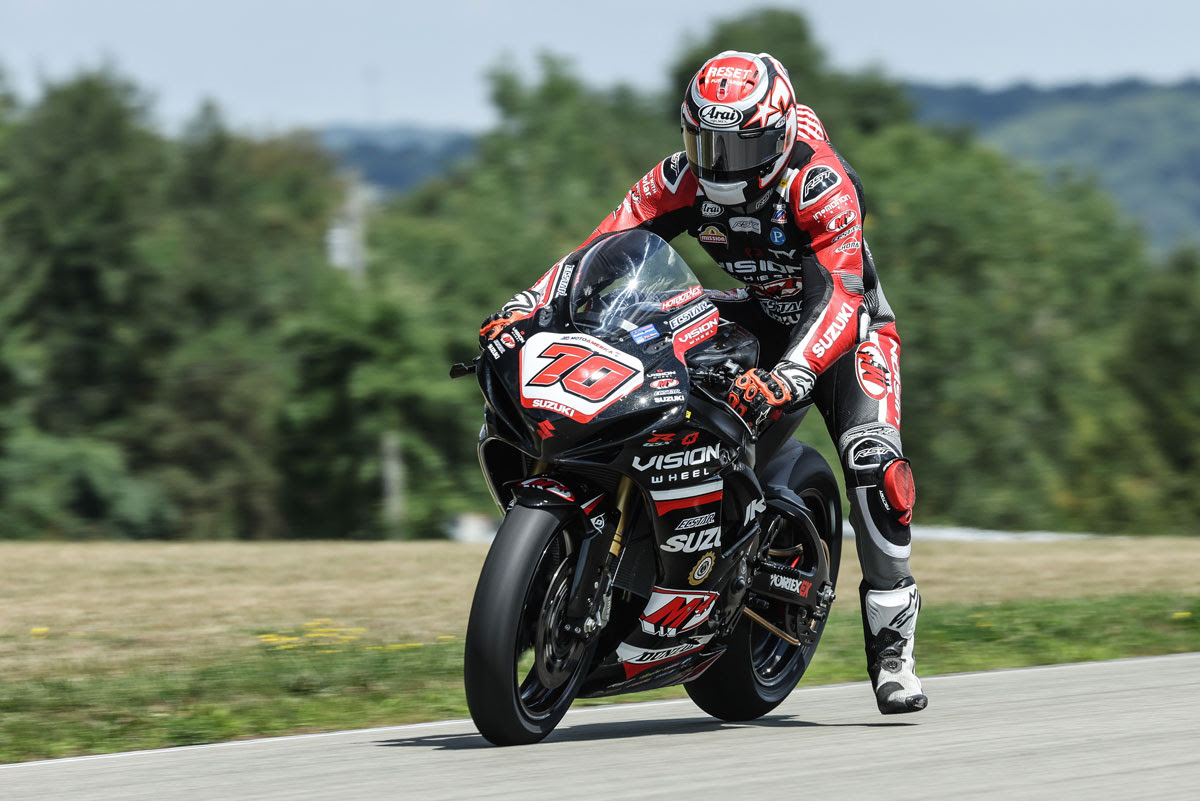 The 16-year-old struggled to find his typical front-running pace earlier in the weekend but came together with his Team Hammer crew to pinpoint a better set-up when it mattered the most.

Scott got a terrific launch off the second row but was pinched off entering Turn 1 and shuffled back to fifth early. Undaunted, he made a pair of successive maneuvers for positions on laps 3 and 4, then set off after the race leaders.

The rising star caught second and applied heavy pressure from third as the laps wound down. Unfortunately, his plans for a last-second pass to steal away a runner-up finish were foiled by a red flag that ended the race prematurely while working the final lap.

“Up until this morning, it was a difficult weekend,” Scott said. “But my Vision Wheel M4 ECSTAR Suzuki crew had the bike all dialed in and really boosted my confidence. I was hoping to set up a pass at the finish line, but unfortunately, there was a red flag. Still, we had good pace and it was a good race.

“I think we will make some more improvements to the bike’s race set up to be stronger tomorrow, but right now I’m just really happy to return to the podium.”

Cory Ventura continued his impressive performance in substitute duty for the injured Sam Lochoff, battling his way forward throughout the race as well. The Californian, who opened the race from Row 3 after qualifying ninth, ultimately earned sixth after finishing fifth, fifth, and fourth in his previous three outings with Vision Wheel M4 ECSTAR Suzuki.

Ventura said, “It was a great race for us after I got a slow start to the weekend. I had a crash on Friday, but I started to get my form back in qualifying. In the race, I had a couple of guys to chase, and I think that helped out. We will try some things for Sunday depending on the weather, but I am looking forward to getting another chance.”

In the Stock 1000 class, there was a Suzuki GSX-R1000R lockout of the podium in Race 1. Congratulations to Disrupt Racing, Cycle World/Octane/Chuckwalla Racing, and Altus Motorsports teams for the clean sweep of the podium.

Meanwhile, the team’s Superbike duo of Jake Lewis and Richie Escalante were part of a drama-filled, twice red-flagged premier-class contest.

Kentuckian Lewis repeatedly hustled his Vision Wheel M4 ECSTAR Suzuki GSX-R1000R forward, fighting his way to sixth before both red flags. He continued that trend in the final, five-lap sprint race, and ultimately went one better, securing a fifth-place finish at the checkered flag.

In contrast to Lewis’ drawn-out day, Superbike rookie Escalante’s race return only lasted a few corners. Escalante injured his ankle in a crash during qualifying at the previous round and opened his race from the outside of Row 3 in Pittsburgh as he worked his way back up to speed. Unfortunately, he went off track on the opening lap following an ambitious attempt to gain positions and suffered a fall after running off track.

Escalante said, “I made a mistake and braked really hard in Turn 3, but I knew I couldn’t stop in time. I went straight to make sure I didn’t hit any other riders. When I touched the grass, I lost the front. I just need to keep learning and focus on tomorrow.”

Team Hammer will be back in action tomorrow to conclude the MotoAmerica weekend at Pittsburgh International Race Complex.

ABOUT VISION WHEEL
Founded in 1976, Vision Wheel is one of the nation’s leading providers of custom wheels for cars and trucks, and one of the first manufacturers of custom wheels and tires for ATVs, UTVs, and golf carts. Vision Wheel looks beyond the current trends and to the future in developing, manufacturing, and distributing its wheels. Vision’s lines of street, race, off-road, American Muscle, and Milanni wheels are distributed nationally and internationally through a trusted network of distributors. Vision Wheel also produces the Vision It AR app to allow users to see how their wheel of choice will look on their vehicle before purchase and installation. For more information on Vision Wheel, visit www.visionwheel.com.