By PR THAugust 22, 2022Uncategorized
No Comments 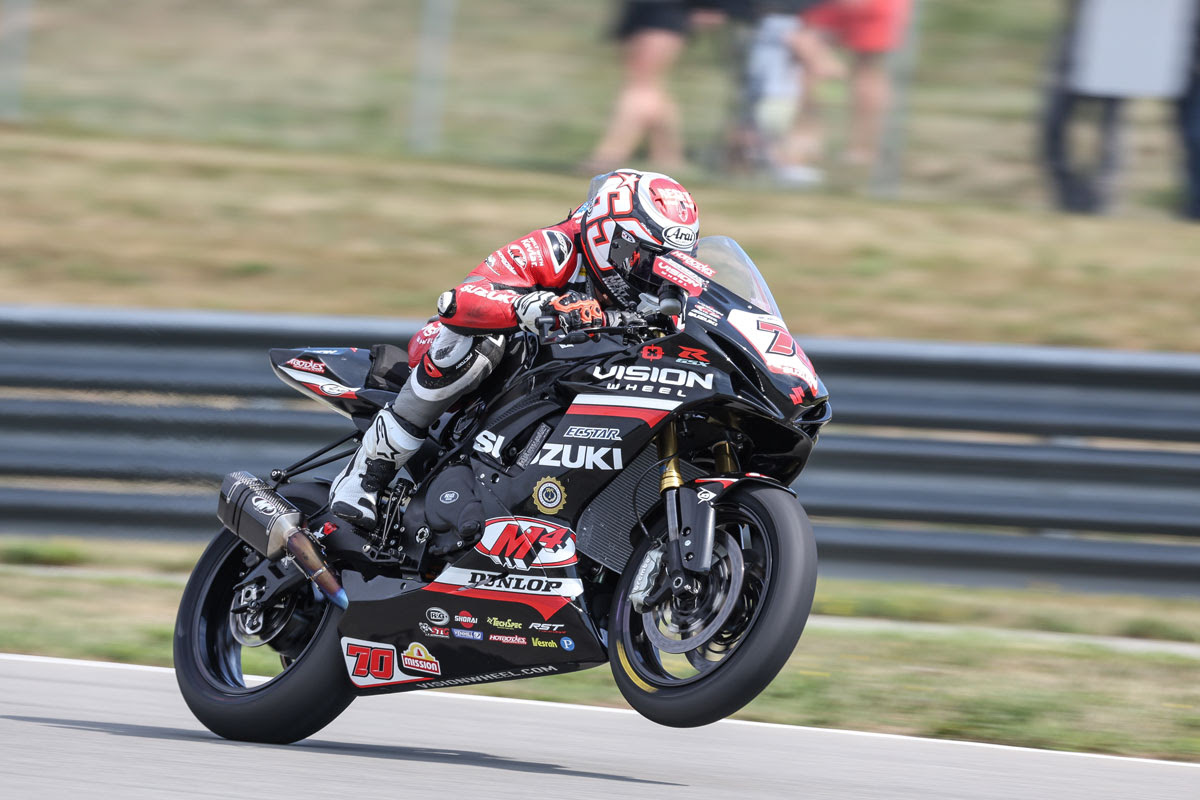 BREA, Calif., August 22, 2022 — Suzuki Motor USA and Team Hammer added to their trophy collection in a strong conclusion to the MotoAmerica weekend at Pittsburgh International Race Complex in Wampum, Pennsylvania.

The podium once again came courtesy of the prodigious Tyler Scott, who registered the eighth podium of his rookie campaign aboard the Vision Wheel M4 ECSTAR Suzuki GSX-R750.  Suzuki GSX-R race bikes accounted for half of the top ten finishing positions in Supersport on Sunday.

It didn’t come easily, however, as the 16-year-old was shuffled back to seventh early and was forced to systematically work his way back into podium contention. While it took over half the race to arrive at the fight for third, Scott made quick work of two rivals to secure the position once there.

He pulled off a pair of timely passes on lap 10 of 16 to move from fifth to third in a matter of corners and then held strong to the checkered flag.

“I had a bad start. I was down in seventh or so I think,” Scott said. “But my Vision Wheel M4 ECSTAR Suzuki crew gave me a fantastic bike today, and that provided me with the confidence I needed to fight back. I am happy with the pace we showed, and we’ll take what we learned today and move on to the next one.”

One of the riders Scott worked past during his charge was teammate Cory Ventura. The Californian, who has continued to impress while substituting for the injured Sam Lochoff, made his way up to fifth after starting ninth on the grid. Ventura would fade late and ultimately finished one position better than his qualifying position in eighth.

Escalante made a concerted push for a top-five finish late, falling just 0.166 seconds short at the flag in sixth position.

He said, “It was a difficult weekend, but we had a good race today. Friday, I was a little less confident after crashing at Brainerd, but my confidence grew. On Saturday, I made a rookie mistake on the first lap. It was much better today. We battled for the top five and the gap to the winner was the same.

“I’m happy to have another few weeks to recover. The injury wasn’t affecting me much on the track, but I wasn’t able to train, and I didn’t have the energy I usually have in the last five or six laps. Now I can start my training on Tuesday and be ready for the next round.”

He was joined in the top ten by teammate Jake Lewis, who came home in ninth position despite a periodical bike issue.

Team Hammer will be back in action on September 9-11 for the penultimate round of the 2022 MotoAmerica AMA/FIM North American Road Racing season at New Jersey Motorsports Park in Millville, New Jersey.