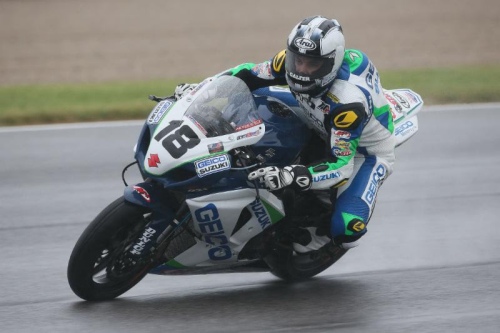 First, Ulrich had to make a quick final lap in the Saturday morning practice session to automatically advance to Superpole 2 qualifying with the rest of the top racers in Superbike/Superstock 1000. Then Ulrich laid down his quickest lap in Superpole 2 in the closing moments of the session to snare the No. 8 starting spot overall and fourth in Superbike.

“This morning, I knew we had some weather coming in the afternoon for Superpole,” Ulrich said. “I knew it was really, really important to put down a time that would get me in the top 10 so I could move straight into Superpole 2. We did that coming to the checkered flag in FP3, the final lap in the final practice session.”

That enabled Ulrich to skip the Superpole 1 session, and the team made some adjustments to the GEICO Suzuki that helped him improve in Superpole 2. On his ninth and final lap, Ulrich sped around the 2.25-mile Thunderbolt Raceway layout with a time of 1 minute, 41.840 seconds.

“That really worked out well for us because then we improved even more in Superpole 2,” Ulrich said. “That was another checkered-flag run that put us up two more positions.”

Ulrich hopes to continue that momentum in the two 25-lap races slated for Sunday afternoon.

“I’m looking forward to two races tomorrow, two hard 25-lap races,” Ulrich said. “They’re going to be super physically demanding, especially since there’s so much pressure on the right side of the bikes. I’m happy with our starting position, and hopefully we get away with the front six or seven and pull me away from the back.”

Ulrich and his team tested the GEICO Suzuki at the “Lightning” course here Wednesday, making steady progress with the bike.

“It’s been a pretty good weekend,” Ulrich said. “That test on Wednesday really helped to get things moving. We’ve just steadily been creeping up on it all weekend.

“We’ve been taking bites out of it all weekend and improving. I’m happy about that, happy the new chassis settings are working in wet and dry. Everything’s moving forward.”

This weekend’s race marks the final MotoAmerica event of the 2015 season, and Ulrich has been on a roll. He’s finished in the top five in Superbike in three of the last four races.

“This is the kind of performance I’ve been looking for all year,” Ulrich said. “It’s better late than never. We’ll see how tomorrow goes. It should be fun and a big challenge.”