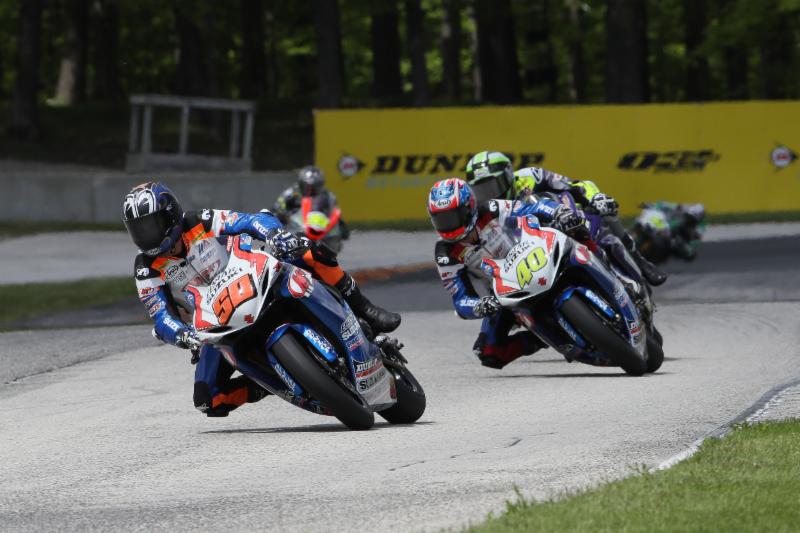 M4 ECSTAR Suzuki teammates Bobby Fong and Sean Dylan Kelly monopolized the lead, with nobody else managing to get to the front of the thrilling 11-lap Supersport race.

Fong and Kelly swapped the first two positions back and forth for the opening half of the race. At that point, Fong moved to control the pace at the front while Kelly hung back in third in the close, three-rider shootout for the win.

Fong never put a wheel wrong despite heavy pressure from behind. He took full advantage of his Suzuki GSX-R600’s outstanding acceleration and top speed to hold his position on the four-mile circuit’s long straightaways. Fong earned the checkered flag with 0.357-second to spare.

Kelly struck on the race’s final lap, putting himself in position for a last-gasp sting in the sprint to the flag. The 17-year-old turned the quickest lap of the race (2:19.041) on the last lap, with an ideal launch out of the final corner. He then slipstreamed past an opponent to steal second at the line by a 0.022-second.

The win was Fong’s second of the season. “I’m excited to be up on top of the box,” Fong said. “It was a great battle. I was just trying to hit my marks and run a smooth race. It’s been a hard few races for me with the crashes last time. I’m so thankful to be up front; we need the points for the championship. I’ve never won a championship before but I have the right team behind me to do it this year. I’m just going to keep plugging away.”

Kelly said, “I tried to work with Bobby in the beginning. We actually did a pretty good job pulling away so there wasn’t a big group like yesterday. I decided to save my tires because that’s something I messed up yesterday. It worked out. I had a little bit extra on that last lap. It wasn’t enough to reach Bobby. He did a really good job and he was very consistent, but it was enough to get the fastest lap, which is important to me as I continue to make steps forward.”

Up-and-coming Canadian Alex Dumas impressed throughout the Twins Cup race on the Roadracing World Young Guns Suzuki SV650. After claiming a grid spot on the inside of Row 2 in the morning’s qualifying session, Dumas traded positions back and forth in the multi-rider fight.

Dumas utilized late-braking heroics in Turn 5 and Canada Corner to secure his runner-up finish on the race’s final lap, just 0.319-second off the win.

“I hoped to be up there with the guys,” Dumas said, “I wasn’t too bad in qualifying, so I expected to fight for the podium. I really had fun battling with all those guys. It’s my first podium this year, and I’m ready to get more at the upcoming races.”

Autovest Suzuki’s Joseph Blasius finished less than a quarter-of-a-second outside the top 10 in 11th.

Team Hammer will be back in action in two weeks as the 2019 MotoAmerica series travels to Utah Motorsports Campus on June 15-16.