FONG AND KELLY ON THE PODIUM AT ROAD AMERICA 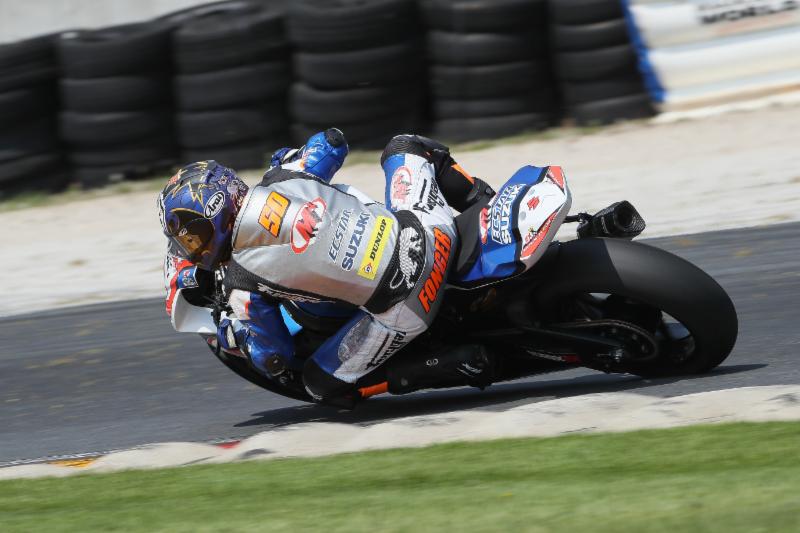 M4 ECSTAR Suzuki teammates Bobby Fong and Sean Dylan Kelly entered the day’s MotoAmerica Supersport race as podium favorites after showcasing the amazing power of their GSX-R600s around the high-speed venue by qualifying 1-2. And they proved to be major factors in the race, battling at the front of a six-rider pack during the opening laps.

Polesitter Fong and a rival shook free of that close-knit group at mid-distance and threatened to make it a two-rider fight to the checkered flag. However, 17-year-old Kelly reeled them back in, setting up an epic final lap.

Fong led to open it, but Kelly stormed through from third to first in Turn 5. He was shuffled back to second where he and Fong then tangled, providing their rival with an opportunity to eek open a small advantage that he maintained to the stripe.

Fong managed to re-pass Kelly to take back second, which he held to the flag by just 0.041 seconds.

Runner-up Fong said, “I’m ready to move forward to tomorrow and get another shot at it. It was fun racing with the guys. We knew we had a better bike down the front straight for sure, and we’ve been working so hard this year to try to get my performance on the brakes a little better. We’ll continue to do that, and hopefully we can find something for tomorrow. If we’re able to do that, I feel we’ll have the package to beat. Overall, I can’t complain. We got some good points, and we’re looking forward to tomorrow.”

Kelly’s third-place finish continues his amazing streak of finishing on the podium at each race weekend in what is his first season of professional racing in the United States.

“That was definitely a fun race, Kelly said. “We really battled up front the first few laps — there were a lot of us up there. Man, it was crazy how those two up front pulled out from that group like that, but it did help by spacing things out. I had a little bit of gap to them midway through the race, so I gave it my all to bridge that gap. I really wanted to get close to them and I did, but I just didn’t have enough to get the win at the end. The bike is ready to win, and Bobby and I are both competitive enough to try to make it happen tomorrow. I’m very thankful to the whole M4 ECSTAR Suzuki team for all their work — the bike was awesome.”

The weather took a turn for the worse immediately after the conclusion of the Supersport race. Some light, intermittent rain impacted the mostly dry Superbike race, and M4 ECSTAR Suzuki’s Jake Lewis suffered in particular when late set-up changes backfired. Despite his struggles, Lewis finished the 12-lap race in 10th.

With just a single Twins Cup race on the weekend schedule, Roadracing World Young Guns Suzuki’s Alex Dumas and Autovest Suzuki’s Joseph Blasius spent their Saturday dedicated to qualifying on a wet track. Dumas ended the day ranked sixth provisionally at 2:44.326, while Blasius was 13th at 2:46.728. They have an opportunity to improve their positions Sunday morning before their afternoon race.

Team Hammer will target the top of the podium as the Road America weekend concludes tomorrow.