LEWIS RETURNS TO THE TOP FIVE IN VIRGINIA 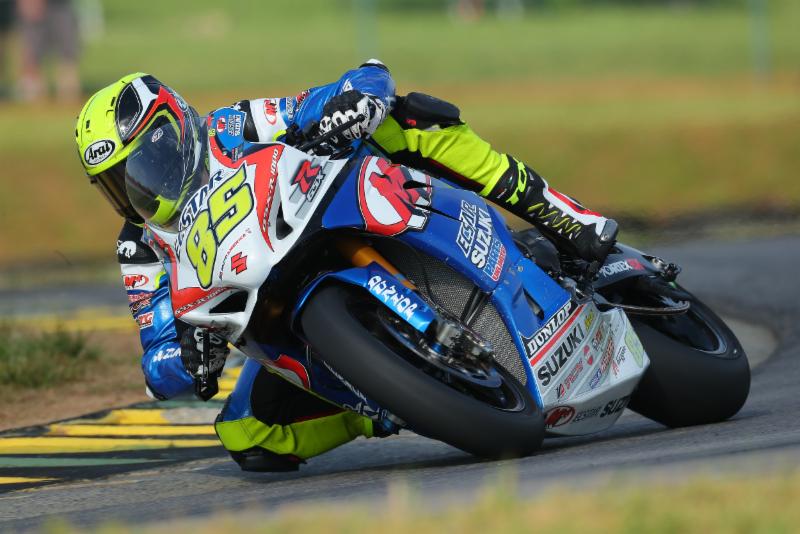 Team M4 ECSTAR Suzuki’s Jake Lewis backed up his first top-five MotoAmerica Superbike result of the 2019 season — scored last time out at the Circuit of the Americas — with another top-five on Saturday at Virginia International Raceway.

Lewis continued his determined push to the front of the field as he continues to recover from a lingering leg injury, again flashing the speed and skill necessarily to eventually fight for the podium.

Just as he did in Texas, the Kentuckian held station on the tail end of the lead pack aboard his Team M4 ECSTAR Suzuki GSX-R1000 during the opening half of the race before slowly fading into his own race.

Lewis has steadily picked up momentum as the season has taken shape, improving or maintaining the previous finish each time out. In chronological order, his 2019 results have been seventh, sixth, sixth, fifth, and fifth.

After the race, Lewis said, “Today’s race wasn’t too bad. I got a good start compared with the last few races and the pace was pretty good in the beginning. Since I’ve been injured, I haven’t been able to train as much as I would like. I was pretty worn out so I brought it home in fifth and got some more good points. We ran strong early so I am encouraged that we are making progress.”

Meanwhile, Team Hammer’s Supersport duo of Bobby Fong and Sean Dylan Kelly suffered through a deeply disappointing Saturday at VIR after opening the season in such sensational form.

Despite qualifying eighth on his Team M4 ECSTAR Suzuki GSX-R600, Kelly was unable to make the start for Saturday’s race. The unfortunate combination of a late qualifying crash, a delay in getting the bike back, and extremely limited time to make repairs before the start of the race ultimately kept him off the grid.

Fong, however, leapt into the race lead after qualifying fifth and starting on Row 2. And the Team M4 ECSTAR Suzuki pilot would stay in the lead for the first six laps of the race.

But Fong suffered a vicious highside and was thrown over the front of his bike moments after starting lap 7. The Californian had the wind knocked out of him in the violent tumble, and in the time it took for him to recover his breath and his bearings, the race was red-flagged.

Despite being medically cleared to rejoin the race by three doctors in the track medical center, Fong was declared unfit by Race Direction and not allowed to grid up for the restart.

Even with the setback, Fong remains third in the Supersport title fight and within 10 points of the championship lead.

Due to the two-day weekend’s condensed schedule, the Twins Cup and Stock 1000 competitors each took part in just a single practice session on Saturday.

The entire Team Hammer contingent will be on the grid and gunning for top results as the Virginia International Raceway weekend concludes on Sunday.